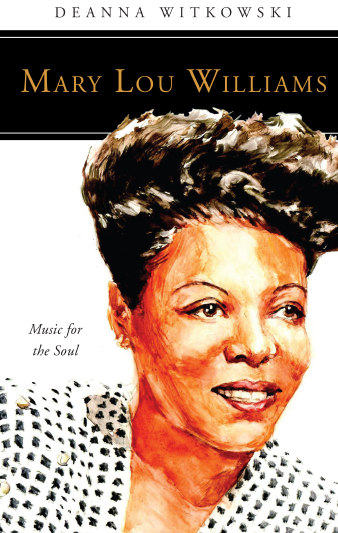 An astounding biography has recently emerged which discusses the life, faith and music of pianist and composer Mary Lou Williams. Author and jazz composer/pianist Deanna Witkowski has penned a well-researched study with fascinating insights into a time punctuated by race relations and the Civil Rights Movement. Mary Lou Williams, Music for the Soul (Liturgical Press, 2021) discusses her in-depth collaborations with other musicians, her contributions to the world of dance, and her charitable efforts. Williams was interested in making jazz relevant to the younger generation and her religious sensibility played into her approach to her art and more broadly, her life.

Why does Mary Lou Williams resonate so strongly with you?

In 2000, the late pianist-educator Dr. Billy Taylor invited me to perform at the Kennedy Center’s Mary Lou Williams Women in Jazz Festival. At the time, I knew Williams’ name and almost none of her music. I decided that if I was to play at this festival, I had the responsibility to listen to Williams’ music and to learn her story. Right around that same time, the first biography of Williams, Linda Dahl’s Morning Glory, had just been published. When I got to the section of the book chronicling her conversion and liturgical music output, I was immediately heartened: I’d just composed my first jazz Mass for All Angels’ Church, an Episcopal church in Manhattan where I was then serving as music director. I checked out Mary Lou’s Mass and visited her archives at the Institute of Jazz Studies at Rutgers University, where I listened to homemade recordings of her first two Masses. I also started checking out her later small-group recordings such as her 1974 album, Zoning, and was amazed at how modern she sounded, yet how she always had a deep sense of swing no matter the style. I felt emotionally connected to Mary’s playing and composing and knew that I’d found a companion of the spirit.

How has her career been an inspiration to you in your own playing?

Williams was a very determined person who believed in her musical vision. I admire her unwavering persistence to create opportunities for herself. She gives me the courage to continue to follow my own path.

Talk about your research for the book and what did you enjoy in writing this book?

The surprising and not-so-surprising context of the book’s beginnings is that the book was not my idea: I was invited by Liturgical Press (the publisher) to write a new Williams biography based on some of my previous online Williams-centric articles. The book is part of a larger LP series called “People of God,” which consists of relatively short biographies on important twentieth or twenty-first century Catholics. I’d already been researching Williams’s life and music—particularly her liturgical music—for twenty years. Writing the book afforded me with the opportunity to delve much more deeply into earlier periods of her life and to also become acquainted with her hometown of Pittsburgh. I ultimately decided to move from my twenty-plus-year home in New York to Pittsburgh in the summer of 2020. Last February I bought a house here, not realizing at the time that Mary’s gravesite is located exactly one mile from my new home.

What was one surprising thing that you learned about her career or her music, or Ms. Williams personally?

Mary’s mid-life conversion to Catholicism and her subsequent sacred music compositions, including three jazz Masses, are well-reported. Usually, there are a few particular names of priests and musicians who helped Mary find her path of integrating her music and her faith. What I’ve found fascinating in my research are the many friendships that Mary developed with nuns and how those friendships provided behind-the-scenes support for her work and her spirit. I’ve received a grant from the University of Notre Dame for a new project entitled “Writing Friendships: Letter Correspondence between Jazz Pianist Mary Lou Williams and Women Religious from 1961–1981.” I’ll return to the Institute of Jazz Studies at Rutgers to examine letters that Williams wrote to nuns—many of whom she befriended while on spiritual retreats—to further understand how networks of women provided an informal support network for Williams.

What was the most fun part of the project?

The biggest gift of this project is that it has widened my circle of friends.

What inspired your album Force of Nature?

Force of Nature (MCG Jazz) features Williams’s bold, adventurous compositions, including one tune that hasn’t been recorded since 1944 (“Carcinoma”). The idea for the recording came about when I was visiting Pittsburgh for seven weeks doing research for the biography and getting to know the Pittsburgh jazz community. During my stay, I visited Marty Ashby at Manchester Craftsmen’s Guild I’d met Marty at several arts conferences, and he’d expressed interest in my book progress. During our chat, I mentioned that it was a shame I didn’t have my own recording of Mary’s music to complement the book. Without missing a beat, Marty responded, “Well, we’ll have to fix that!”

My main goal in writing the biography was to have readers put down the book and listen to Mary’s music. That’s why I’m so glad to have both the book and the recording come out within several months of each other.

Photos courtesy of and with permission of Ms. Witkowski.