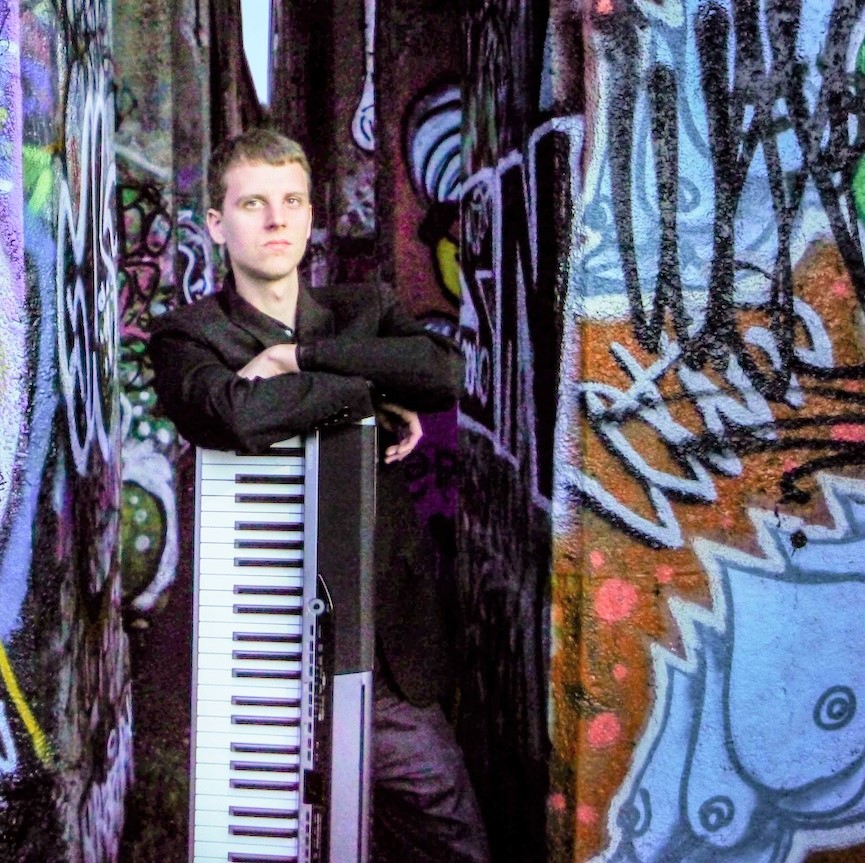 The new CD that drops 3/12/21 from pianist/composer Julian Hartwell called “LYVELIFE” is an invite to enter a world where music makes you feel sublime. The song “Rough Sketch” has a big band vibe with some stellar breakouts from sax and trumpet and vocals that skillfully skirt the edges of scat, as Hartwell bounces and bops upliftingly on keyboard. “Morning Luv” is a gorgeous and simple piece with warm vocals from Gary Dawkins and “Abstract” has a great pace, a hot beat and brings stress down to a level zero. Don’t think; just hear, absorb and catch this sweet, easy view of life.

When did you realize you wanted to be a jazz musician?

Well it took about three CD’s to rock my (teenage) world when I was first taking piano lessons and turn me into a full-on jazz. My aunt sent me a best of Duke Ellington Big Band compilation, which totally opened my ears right up as far as large ensemble writing and that palette of possibilities. But then my teacher gave me two more game-changers: Oscar Peterson Trio Live at the Blue Note, and not too long after that, Bill Evans’ “Portrait in Jazz.” Just hearing the raw swing and joy from Oscar (not to mention otherworldly technique), combined with the lyricism and emotional weight of Bill’s playing and the interaction among that historic trio…totally blew my twelve-year-old mind and it’s safe to say at that point I was utterly hooked and wanted to make this music a major part of my life.

Why did you choose the piano to express yourself through?

Well it’s interesting…as it happens it was the guitar that I really had my first real “connection” to music with just strumming the open strings and being fascinated by the resonances and tones of it all. But the piano was always present in my house growing up.

My mom sang and played old Appalachian folk and art songs, and my dad knew the first few chords to ‘Misty” and “Girl From Ipanema.” So when it came time for the learning an instrument age, I naturally gravitated towards it. Coincidentally (or Divinely ordained, depending on your perspective), family friend and celebrated local pianist Jim Walbert (of Birmingham, AL, where I grew up) lived quite literally at the bottom of our street, so taking lessons with him was a no-brainer. He had a collection of thousands of handwritten piano arrangements of popular tunes, show tunes, famous themes from TV and movies, standards…so it didn’t take long before the richness of piano jazz took hold of my ear. Once I realized I could make even more sound and especially harmony from the keyboard I didn’t need much convincing to stay with piano lessons and that trajectory.

How did the single “Rough Sketch” expand the idea to create an album?

“Rough Sketch” had actually been an instrumental tune in The JHP [Julian Hartwell Project]’s repertoire for years. It was always a solid funky backbeat number to have in our back pocket, but I never felt totally satisfied with it as a complete song for some reason. So when I started conceiving of the idea to collaborate with more vocalists, and eventually make a full-fledged project out of it, I decided to give it a new lease on life and write lyrics for it.

I’d say that track really kickstarted the LYVELIFE vision more than anything else, in that the lyrics really embraced the raw, messy unpredictability of life. But the song is so short that it felt like just the beginning of exploring this theme so I followed that inspiration and it led me to flesh out the rest of the material for this release.

How does this project differ from the other music you’ve produced?

This album definitely feels like a big leap for me as a composer, and for the first time, a songwriter as well. I approached this project with the intention to really convey a grander theme unlike my previous efforts. I thought a lot more about serving each song, and how my arrangements and overall flow of the material could do that. And obviously that included making room for the vocalists or other collaborators who joined in. I wanted to get away from the typical “melody down, solo, solo, solo” approach like my first album…I mean some of those songs turned out to be 10+ minutes! Not that there’s anything wrong with that, especially in a jazz context, but I wanted to structure things more, trim some of the fat, and really get to the point.

I’d be lying if I didn’t say I was motivated to some degree by yes, a more commercially-appealing sound, but I think that awareness tends to come built-in to songwriting more anyway.

I think I’ve grown a lot in terms of crafting a deliberate statement, still retaining a big and full sound with the larger group but knowing where and how to use discretion and taste to serve the material rather than get in the way of it.

Do you feel your music embodies living life?

I’d like to hope it does! That my music creates a real connection with the listener’s own lived experience. To me living ‘LYVE’ means living fully, boldly, with an open mind and heart, and a willingness to grow and update one’s perspectives along the way.

I’d like to think that my music is approachable universally both in the subject matter of the lyrics and overall feel/bump/groove to the musical elements. I really sought for each song to embody each particular theme I was going for; but hey, that’s what an effective composer always shoots for.

How do your band members meet the challenge of putting out a great sound?

They all bring their own unique sensibilities and ears to the project, which is a welcome help in taking the burden off of just myself to produce a great record! I mean, my bass player plays in a prog-rock-meets-jazz group, my horn players are well-versed in straight-ahead, my drummer has a background arranging for church and orchestrating, production for hip-hop stuff, etc. Their contributions are a big part of this final product called The JHP.

I wanted to write more to their sensibilities for this record especially, so being able to sit back and allow the songs to take shape with their own voice and swag in the mix was a lot of fun to participate in. Over the years I’ve had to learn how to put my own over-perfectionism on the back seat and trust that what may emerge may not be exactly as I originally conceived, but 99% of the time is gonna turn out better than that initial vision anyway.

What’s your favorite part of producing an album? The most frustrating?

To that last point- the sheer unpredictability of the process and reaching a sum greater than the parts is probably what I most enjoy. Being surprised; having expectations exceeded. There were more than a few “bumps” that happened during our recording sessions that might’ve felt like disasters in that moment, but ultimately turned out for the best in really surprising, reassuring ways.

What I get more frustrated with is probably just time and the tedious details it takes to bring a record to full fruition, with those high standards of mine. Sometimes I just want to be done with it, but there’s a lot to account for, and I have my moments of impatience.

Then there’s the sheer excitement of not knowing where the music is really going to go, and being a participant and witness to the unfoldment. Love that.

As soon as COVID restrictions are lifted, what are your plans as a band?

I’ve actually really been shifting my identity as an artist, performer and bandleader over the last year. We haven’t performed together in a year, which is kind of mind-blowing. Honestly I’m putting this album out as more of an artistic statement, without much intention to tour or perform. I’ve really embraced a new definition of myself as a producer these days, delving into sync licensing and the world of production music.

I’m excited to share this new music with the world and step out as more of a songwriter with this release. For a second record that I was able to see through a pandemic to completion, I’m pretty proud of it! I hope that LYVELIFE connects with listeners of all stripes and backgrounds…to uplift, to inspire…and remind them that it’s OK to be a work-in-progress. I hope it’ll bring some worthy attention to all my awesome collaborators, too!