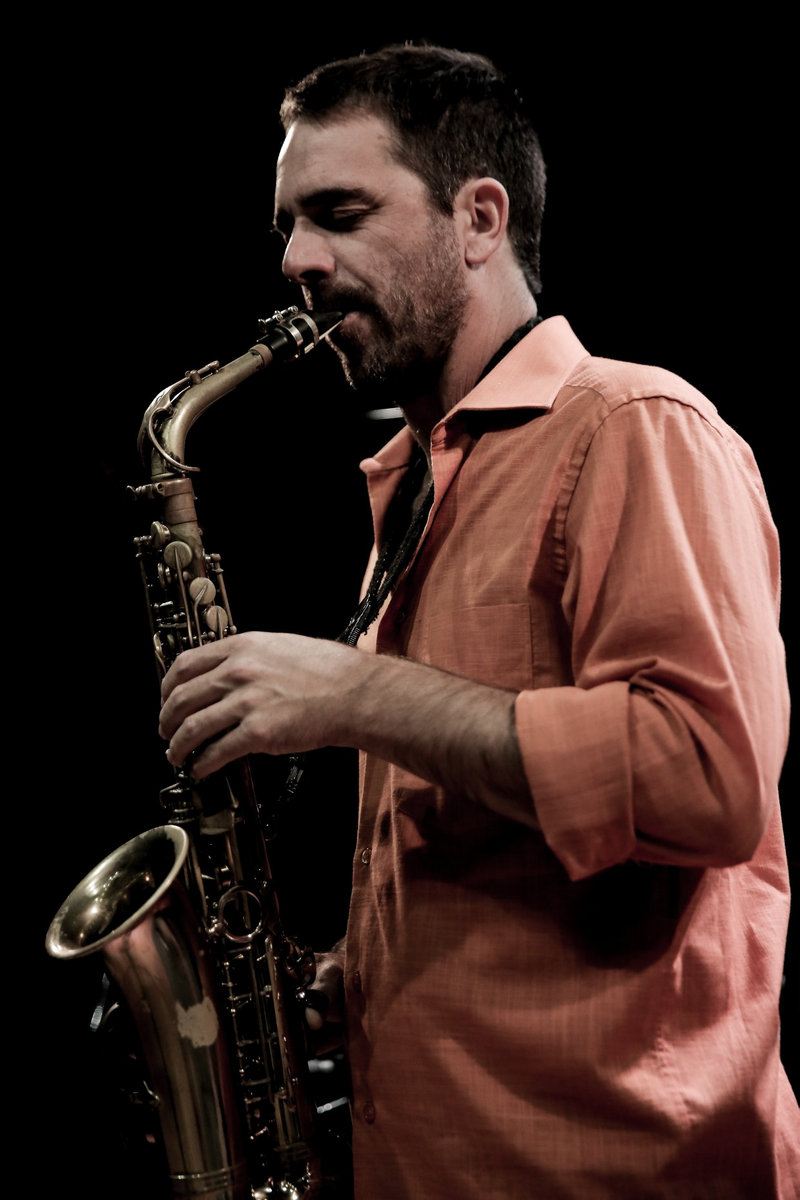 It’s like play, like repartee: each voice or instrument stands up to do a poem. In this case, three poems.

This is sax player José Lencastre’s new album  “Anthropic Neglect” which features guitar (often used percussively with myriad attacks on the strings); a sax that stops, starts, repeats a motif, breathes and starts again; and consistent, driving drums that sample from several possible flavors of rolls and rhythms. The tracks, noncommitally called Concepts 1, 2 and 3, present meandering melodic snippets and experimentations particularly in the first two pieces. “Concept 3” launches with a lyrical pronouncement from the sax that others soon pitch in with a tag, a tickle or a poke. Leave your expectations at the door and drift with it.

How did you come across jazz when you were younger and why did you decide to play the sax?

I came across jazz around the time I was in my late teens.  My brother played the drums (he still does) and he developed an interest in jazz. In a very natural way I also started to enjoy it. I had played a bit of drums too, but wasn’t very serious about it. One day I decided I was going to play the sax. It just came to me as a certainty that it was the right thing to do. My early influences were Coltrane and Jan Garbarek. I used to listen to a lot of the recordings by the Coltrane Quartet (Crescent, A Love Supreme). Garbarek´s album “Madar” was one of my favorites too.

Why did you decide to create your own label, and what was involved in that?

I had been talking to friends about this for a while. One of the major factors is that when you run a label you can control every aspect of the process. Most of the time the recording can only be released after several months or even a year. Our intention is to document our music and put it out to the world as soon as we want. We are five people at Phonogram Unit (Hernâni Faustino, Rodrigo Pinheiro, Jorge Nuno, Vasco Furtado, and myself). We did quite a lot of brainstorming that involved regular online meetings. Apart from that, it’s running in a pretty smooth way. Our second edition is due to come out in a couple of weeks.

What inspired “Vento” (is that a windmill on your CD)?

It looks like a windmill but it’s actually the world’s first automatically operated turbine, built in 1888 by Charles F. Brush.

“Vento” means wind in Portuguese. Saxophone is considered a wind instrument. We have a lot of wind in Lisbon. Wind is something you can definitely feel but you can’t see, as it happens with music and with feelings and emotions. After we played back the music, we thought this would be a good name for the album.

Are the tracks related thematically on “Vento” or are they independent musical ideas?

We didn’t have any preconceived idea about what we were going to play. In fact this recording came as a good surprise to us. We had booked two hours in the studio but only to do a session, to do some playing together. When we got there we were informed by our friends and sound engineers that they were testing some new mics and asked if we wouldn’t mind if they would record us. So what is on the record is basically the session in the same order we played it.

We were just having fun playing, took a couple of breaks, played a bit more and that was it. It was a very relaxed afternoon, feeling no pressure at all about the fact that it would later become a record. Only after we listened back to it did the three of us agree it was sounded good and that it would be worth releasing. When we formed the label, it made sense to be the first album to be released there.

Why do elements of experimental sounds appeal to you and why do you enjoy communicating your ideas in this medium?

Experimental sounds are appealing to me; it’s not something I decided to embrace. I just find it natural to communicate ideas in this medium. I can’t really explain why, it’s very subjective, but I can only say that somehow it makes sense to me and to the way I approach music.

Experimental or free doesn’t mean there is no focus or thought behind what you’re doing, it’s just another way to communicate.

Talk about the give and take when you are composing. What kind of guidance do you give the other musicians, or are you all equal in creating?

When I’m composing it is more of a solo thing. The give and take happens inside my mind and it’s influenced by all my life experiences.

Depending on how much the music is rigid in terms of what it is written or more open will determine how much guidance is needed. I’m pretty open to the other musicians’ inputs.

If we are playing free, then I believe we are all equal in the creating process. Everyone is affecting everyone. For me it’s like a conversation: we’re talking and responding to what’s being said. Sometimes you can propose a new subject in the discussion; sometimes you can’t .. Ideally it flows in a natural way just like any good exchange of ideas.

Do people enjoy the free style and all its emotions?

I try not to think about audience expectations, and also try not to have any expectations myself. It’s a communion thing. We are sharing energies and influencing each other.

When musicians are enjoying what they are doing, that feeling will be absorbed by the audience. Most of the time if you play with emotion people will enjoy it.

Describe the process of producing two albums at the same time; keeping deadlines straight and getting in the right head for the different music?

When that happens you just have to try to separate things and deal with each one the best way you can, maybe choosing some days for one project and some others for the second one.

These two albums were recorded in different years. “Vento” in November 2018 and “Anthropic” Neglect December 2019 (which was released last month).

One curious fact, though: on the day we recorded “Anthropic Neglect” we also recorded another album that will come out next year. In the first part of the session, it was sax with the rhythm section, and in the second part we were joined by guitar player Jorge Nuno.  The recordings sound very different from each other, in part deliberately and also because when a new instrument is added to the equation it affects the whole sound.

Phonogram Unit just started to take shape this past spring. We were all in lockdown and exchanging ideas about how to bring it to light.

Is “Anthropic Neglect” about the randomness of humanity or something else?

Drummer João Valinho suggested this title. Yes, it can be about the randomness of humanity, about how much chance and luck have such an important role in the world we live in. I also like to think it is a call to awareness that we as humankind have been neglecting our environment and our relationships with our brothers and sisters.

Why are the tracks named with an open, vague feeling (“Concept 1”) etc.?

We wanted to leave the interpretation open to the listener. Music is very abstract, and by giving a name to a certain track you are in a way conditioning how it will be perceived. We have the name of the album setting an idea, a thought. The concepts are for the listener to actively give them some meditation or not. It’s up to each listener to decide how and what he or she will take from it. It’s equally fine to just relax and enjoy the music!

How have you worked around the challenges of performing music at this time?

Most of my performances have been canceled or postponed. I did a few live streamings but it is not the same thing. Fortunately, we did a presentation concert for our label.

How have you been able to remain optimistic as a musician when venues are still closed?

I´m based in Lisbon, Portugal. I try to remain optimistic the best way I can.  I try to look at this as an opportunity for something new instead of focusing on the negative. Since March, I´ve been composing much more, something that probably wouldn’t have happened if it there were no lockdown. I also have been practicing the saxophone a lot more.  I have been doing some physical activity, and also enjoying my time at home.

What are your plans for writing and performing in 2021?

I am working on a solo album of compositions where I play all the parts, usually two altos and two tenors, it’s been great fun. I have also the complete repertoire written  for a new sextet that I’m planning to record in the beginning of 2021.

We have a new album already recorded with the Vento band; again it was unexpected and we´re very happy about the music.  It was captured live last month in a performance we did for a radio program inside an old church in Caldas da Raínha.

I would like to record and release the new Nau Quartet album next year as well as the new Spirit in Spirit Trio. Let’s see what happens. I’m sure some other opportunities will be presented to me too.

I like to put myself in a position where I’m open to all the infinite possibilities of life.

Performance-wise, I hope we can all go back to being able to play without any restrictions. I have some plans but until this pandemic goes away it’s hard to book and organize live performances.

Thank you so much for this interview, Debbie. I wish all the best to you and to the readers. Peace.

Photos courtesy of and with permission from the artist.