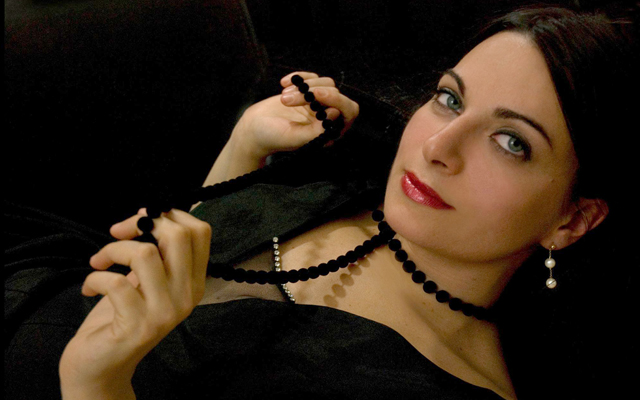 In the recent album by Valentina Marino called “Space Oddity” there’s that Bowie song (Major Tom) where Marino offers a plaintive touch to the story about a journey into deep space. The instrumentation here is haunting as well, adding a brushstroke of dissonance and a rhythm that holds back in a slightly uncomfortable way. Also on that album, Marino matches the pulse of “In the Name of Love” with the right amount of broken-heartedness, and swings mightily in “In Cerca di Te” [In Search of You].

The new tracks in her upcoming end-of-year album “East 75th” are golden renditions of songs that seem written for her. Her voice catches with the wind and then moves like a veil that breathes its way through the upcoming “Somebody I Used to Know”; the cello provides a rich pairing against the timbre of her voice. “Consider Me Gone” is teasingly syncopated, and here, she speaks the truth of her story directly to the listener as much as she hits the perfect lilt.

What vocalists did you grow up on and did they inspire your career path?

Even if I grew up listening and singing all kind of styles, with a particular affection for the music of the 70s and the 80s, my roots are in jazz. Jazz for me is and will always be everything.

I gave up a career in law to marry jazz. I went back to college and got my BFA from the New School for Jazz and Contemporary Music. I’ve been living in New York City ever since. I can’t believe it’s already my 11th anniversary in the Big Apple, my beloved jazz nest, where I always love to come back while I perform, record and teach across Europe and the US.

There are so many vocalists who constantly inspire me for different reasons. Ethel Waters, for her amazing personality. For being the first black woman who appeared on TV and who recorded with Columbia Records. Her “Stormy Weather” is one of my ever-favorite tunes. Abbey Lincoln, another of my idols, for her groove, her sense of humor and her unique timbre. Sarah, Ella and Billy of course. Peggy Lee, Anita O’ Day and Diana Krall because I feel my voice resonates with theirs. Joni Mitchell, Diane Reeves. You’ll probably be surprise but I absolutely adore Bob Dylan’s rendition of the Great American Song Book. I have to stop, the list could take the entire interview! I am an avid listener, I’m curious, there are and will always be a thousand singers to inspire me and steal my heart.

How would you describe your voice? What exercises and techniques have been the most helpful for you as a musician?

I would describe my voice as vulnerable. I have never been obsessed with the mere technical aspects of the vocal sounds. I’m more focused on delivering what sounds honest and raw because they originate from the very inside. Vocal technique is pivotal of course. I owe everything I’ve learned to July Hardy, who completely transformed my voice over one summer.

To Richard Harper, Amy London and Janet Lawson, I am also forever grateful because they helped me develop the different aspects of my voice through different techniques and patterns: from solfeggio, to some opera workout and scat singing of course.

What types of songs do you like to cover?

Being an eclectic listener, I couldn’t be anything else than an eclectic singer-songwriter. From a disco song of the 80s to the Beatles, from Gaga’s last hit to Elvis. The space is edgeless and time is endless here. I relate to songs from an emotional perspective. That is why I can cover an Ellington song with the same passion and credibility I sing “The Captain of her Heart” by Double. The same happens when I write my own songs.

How do you take a song and make it your own? How far do you like to go in re-inventing a song?

I’d like to answer with an invitation to listen to my reinvented a cappella version of “Three Little Birds” by Bob Marley and my jazz rendition of David Bowie’s “Space Oddity,” a tribute to my beloved Major Tom. “Space Oddity” was on my first New York jazz record, released on the label Jazzheads in 2016. “Three Little Birds” was my self-promoted single. I had so much fun overdubbing and looping vocal layers without any instrument other than my voice.

Talk about your CD “Space Oddity” and what inspired it.

The highlights of producing Space Oddity were having a whole jazz orchestra with strings and horns playing in honor of David Bowie and his Major Tom. The highlights of “Three Little Birds” was having my voice turning into a band. I could have never imagined that it would work out!

What types of instruments do you like most to accompany you?

The bass, the bass the bass!!! Upright in particular. Then the piano I’d say. And drums.

What types of instruments do you think would be fun to work with?

I’ve been having in mind and in my ears for a very long time the vibraphone. It will surely be on my next original songs project, after “East 75th” is released.

What made you decide to launch a website and how have you functioned without one?

I have never functioned without a website. A former friend who hosted my website notified me a few weeks ago with the horrible news that his system got hacked and my website disappeared. After initially being in shock and very disappointed, I am actually now excited for the new upcoming site. It’s like what is going on with this sad pandemic. We have to take it as an opportunity to reset, restart, rebirth.

What new projects are on the horizon?

2021 will be the year of my first original album release, a collection of songs that I wrote inspired by stories and situations of my life in and out my apartment on 75th Street, where I’ve lived for a decade. I don’t want to anticipate too much about this project yet.

At the end of 2020 my album “My Quarantine Covers” will be released. I called it a music journey in the time of COVID. Can’t wait to share with you the funny album cover, where also my dog Pablo is featured! My favorite tracks here are “Early Autumn,” “Cohen’s Dance,” “To the End of Love” that I have re-imagined in bolero and Sting’s “Consider Me Gone”. The band is killing here. Marcio Garcia on Rhodes and piano performs some pirouettes that really make you think of Herbie Hancock. My dear friend Myles Sloniker on acoustic and electric bass is one of the most versatile musicians I’ve ever met. Juan Camilo Sanchez is on drums and percussion and a very special guest is on cello, the talented Molly Aronson. Stay tuned for the release! I’m so excited.

The upcoming album is the result of all this year spent mostly inside. Not only in the material inside of my apartment and after at my friend’s house in the Catskills, but also inside myself. It’s an album that mirrors emotional states of the present and of the past but that also cherish the dances of a groovy, sensual and fertile future.

It’s my debut as a songwriter and composer. I have always arranged my own jazz projects but here I’m working as the master of my entire music and lyrics. It’s something that means the world to me.

Do you have any performances planned for 2021?

Aside from my daily shows in the shower (you gotta work with imagination these days!) I hope to be able to perform soon in Rome at the Alexander Platz, where I was supposed to play this past July. I’m still waiting to see what is going to happen to my summer tour.

Photos courtesy of and with permission of the artist. Top photo (c) Jazz da Gama.