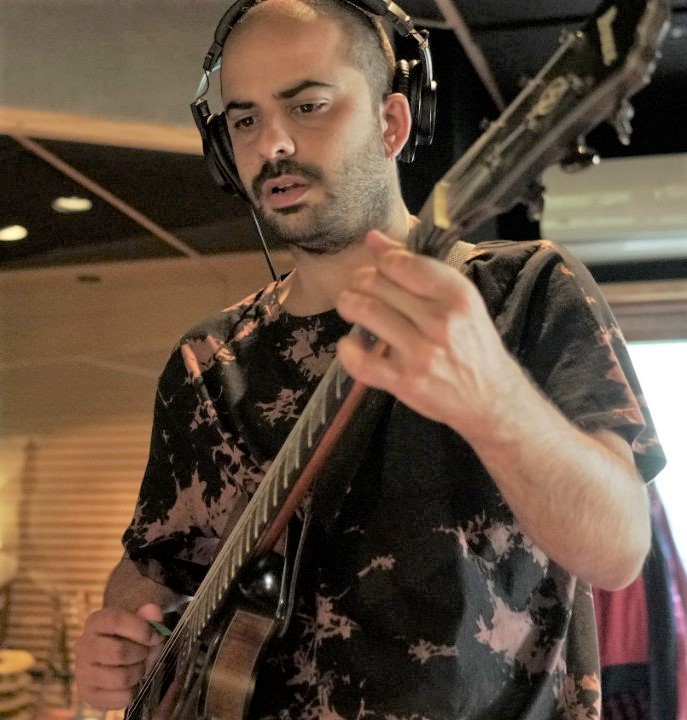 Guitarist Dan Pocetti emphasizes a new journey in his latest album titled “Retoñar” (“Sprout”), which could refer to a young plant or the act of coming alive. The music is appropriately subtle and moves with great tenderness.

“Golpeando las Puertas del Espejo” (“Banging on the Mirror Doors”) soothes like a rising dawn; smooth, pastel tones with swells and retractions like the ocean. That same feeling (inhale, exhale) is present in the title track “Retoñar” with more of Pocetti’s poetry on the guitar strings and nice call-and-response repartee from the saxes. “La Miel en Tu Ventana” (“Honey on Your Window”) – the only song written by another composer (Luis Alberto Spinetta) – is mournful yet loving. A meditative and satisfying experience, Pocetti’s new work is original, beautifully paced and uplifting.

How has your cultural background informed the music you write?

I started playing the guitar when I was a teenager. Since the beginning the connection I forged with the instrument was really strong. When I was just a kid my mom made sure the radio played rock or pop but my musical tastes later evolved into improvisation and those two worlds became one. From that fusion, my style was born.

Who are the jazz artists you listen to today?

What is the meaning of the CD “Retonar” and what is the inspiration behind this CD?

Retoñar represents reconnecting with my essence, finding the sound that represents me within jazz and improvised music. It is the most faithful search for myself within the composition. That is where my biggest influences emerge: cinema, books and punk rock.

Why did you choose ears&eyes record label?

“Ears & Eyes” is a great label that takes care of the esthetic of the artists and their music. Most of the albums that are part of the label are free jazz, indie and contemporary music and not that much with the traditional swing. I highly recommend checking the website earsandeyesrecords.bandcamp.com

How long did it take to put this music together- write, produce, record?

Approximately 2 years. The group originated in 2017 where we played live. This group originally had a piano which we later replaced with a tenor sax. The heavy rehearsals and production work took place in 2019. We also did some shows that were recorded. The compositions on the album represent personal experiences that I had during those years.

Favorite track? Most difficult part of creating the CD?

It’s kind of hard to choose one, but I think the tracks that represent me the most are “Introduccion a la noche inducida” & “Golpeando las puertas del espejo”. Although I enjoy all the stages, the day of recording is always a big challenge, you have to make sure that everything works.

How would you characterize your style?

I would say “New Jazz Rock”

What do you like best about soloing? How do you know how much space to give each musician to solo?

Something I really like about soloing is giving “flight” to the composition. At that moment the music is transformed into something new, and the message is driven by the musician who is doing the solo.

Regarding the times of the solos, I was experimenting in this album with shared solos, especially the two saxophones soloing at the same time. It’s something that I really like.

In Buenos Aires, I really like Notanpuan. I feel comfortable playing there and hearing new music. In New York, I spent a lot of time at Fat Cat where I had a blast.

Most challenging thing about being a leader?

Taking care of everything. Organizing rehearsals, recordings, and concerts is hard work. Yet, it’s something I like to do.

When do you think you might start performing live again?

Hopefully in a few months. Many clubs are experimenting with streaming. I still haven’t had the chance to try it. I don’t know if it’s something I’d like but due to the circumstances, it’s the best option.

Photos courtesy of and with permission of Dan Pocetti.