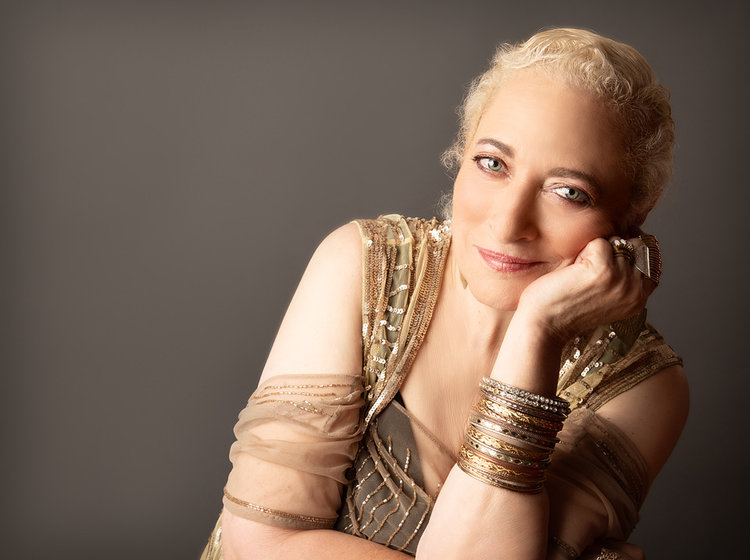 She sings in a register and with a timbre not often heard; deeper, richer, imparting a natural wisdom about life. Ada Bird Wolfe’s latest release “He & Me” – a well-balanced pairing with pianist Jamieson Trotter – describes the observations of life that are both beautiful and sad. Something about her treatment of “But Beautiful” is honest and unapologetic, spare yet descriptive enough to reel us in. In “Blue and Green” (lovely piano here and fantastic repartee all around from Trotter) Wolfe approaches with the same storytelling style: giving the listener room to breathe and ponder each note sung. Bird’s knack for phrasing and pacing is set down like a painter’s thoughtful dabs in “Sweet Nardis.” Her mind-changing interpretation of “A Night in Tunisia” takes a song often heard as harsh and brassy, setting it in a different light, making it lyrical and ethereal.

Do you remember your first performance as a vocalist?

The first performance I remember was as the Ugly Duckling in kindergarten.  When I came back to singing in 2010, my first performance was at Vermont Restaurant in Los Feliz, which used to have an open mic with Ron Snyder on piano.  I sang Lover Man. Ron was tremendously kind and supportive as well as being a terrific player. I met other folks from the LA vocal community that night who are friends to this day.

Do you prefer small, intimate venues or festivals and large events?

The kind of jazz I am singing at the moment is best suited to intimate venues. My favorite venue in LA so far was Bar Fedora downtown, one of Cathy Segal Garcia’s projects. Very beautiful intimate space with the feel of a New York club. We did two shows from the Giant Shoulders series there: And the World Was Mingus and The Saint and the Sinner Man: Miles and Coltrane.

I would like to work with a mid-size group, 8 to 10 pieces, and for that a larger venue would be best.

What is the best tip you’ve ever received about voice training?

Being very conscious of and knowing individually where to place the notes — forward, back, palate, mask and so forth — especially going through the passagios.

You’ve gone in other directions besides music, coming back to it in 2010. What drove that decision?

I went through a lot of different careers on my way back to music, looking for my “path.”  In many ways, coming back to music was fortuitous. I was asked to chant at High Holiday Services at our temple. I enjoyed it so much that I started singing class and from there it unfolded. My first teacher said, “These days everyone is excited about second acts.”

What have you learned about the industry that you were surprised at?

The closeness and supportiveness of the jazz vocal community. I know between 50 and 100 singers in this community.  They are exceptionally nice and talented people, and we all delight in each other and the music we each make.

Why did you collaborate with Jamieson Trotter?

I heard Jamieson play at a club in 2014. I was blown away by his originality and quirkiness. I have a deep affinity for dissonance and I value surprise and humor. He had those qualities. He also has an affection for ‘outside’ music. In late 2014, I had the opportunity to start working with him. The longer we work together the more fun we have.

What is the inspiration behind “He & Me”?

I wanted to make an album that would, as much as possible, share the experience of creativity and deep musical communication that is characteristic of our work together ‘behind closed doors.’  The first sessions on “He & Me” began in early 2019.  It got put aside for a while, then we continued in late 2019 and finished mixing in early March of 2020. With all the COVID disruption, it didn’t get released until October.

There was a lovely, intimate feel to the recording process because it’s a duo album with a long-time collaborator and other members of the team — my producer Lisa Steele and graphic artist Kio Griffith — were the same as on “Birdie,” my first CD.  Eric Astor’s Hideaway studio feels very warm and self-contained, like a spaceship on a voyage of discovery.

Why did you choose these songs?

In one of my other lifetimes, I was a novelist and poet. I began writing lyrics to songs for the first show in the Giant Shoulders series, Monk-O-Sphere, because I wanted to sing Misterioso and no lyrics had been written. The same was true for various Mingus, Miles and Coltrane tunes when we did those shows. Adding lyrics can provide another doorway to experiencing originally instrumental tunes. And of course it opens the songs to singers.

But when I tried to get permission to record the lyrics, I was only able to get permission for the Wayne Shorter tune ESP.  We thought some of the other lyrics were pretty good so we decided to write new music around them.  Those are the three originals on “He & Me”. Since then, Jamieson and I have been writing originals.  At this point, I have two albums of originals that are ready for recording: “Scratch Tracks from Quarantine” and “20/20.”

Many of the tunes on the album were the ones we liked the best from the eight shows we’ve done together. “All Blues“ has been a signature tune; at one point I thought I would put it on every album. We combined it with “Blue and Green” which worked out kind of nifty. “Any Woman’s Blues” and “But Beautiful” have been in my repertoire for ages. There are tunes you just keep exploring and those are two of mine.

Monk is hands-down my first call guy, so we have “Get It Straight” (“Straight, No Chaser”).

I love singing in Portuguese because it is such a liquid, sensual language.  I heard an incredibly cool arrangement of “Logo Eu” done by Monica Salmasso.  So that came in.

What is the most challenging song?

“Blackbird” is my favorite track. Jamieson’s arrangement is so thrilling that I was literally breathless when I heard the demo track; I didn’t want breathing to interfere with hearing what was happening.  He left the melody completely pure.  Then, he added the recurring motif of the blackbird call and re-harmonized it in a tremendously exciting way that melds it with jazz and opens up possibilities for improvisation.

The most challenging track was “Logo Eu”, principally because of the language. There are a lot of lyrics (compared with “Doralice“ from my first album). Usually I don’t have a problem with memorizing lyrics but I worked on “Logo Eu” for more than six months, listening to Monica Salmasso and Chico Buarque over and over again. Also, because of the complexity, I worked with a language coach. She was wonderful! I feel pretty confident that someone who speaks Portuguese can understand what I’m singing

Classics like “Blackbird” – how do you honor them while giving your own interpretation?

We honored “Blackbird” by not messing with the melody; we made it ours through jazz harmonies and opening it up for improvisation. My improvisational style generally has less of those be-bop runs and more blending of the lyrics with melodic variation and improvisation around the lyrics.  So that’s another way that I made it mine.

How would you characterize the sound and quality of your voice?

My voice is much lower than most women’s voices; my range is almost identical to a tenor, though my highest notes are higher than a typical tenor. So this gives the voice a different depth and resonance. I think the sound is individual and recognizable.

In what ways have you exposed your music to the public in light of the lockdown?

Like so many of us, I am in a transitional place. I have not been performing — the latency problem (the delay that comes from the signals bouncing off satellites) makes it impossible to broadcast over Zoom with musicians in more than one location.

From a performance standpoint, singing presents special problems because singers can’t wear masks and singing is a super-spreader activity.  People make different choices but, for me right now, the only way to perform is online using pre-recorded tracks.

Most exciting thing about coming out with your new CD?

Probably I will record the next few albums instead of performing (though we are still figuring out how to record under these circumstances).  We have recorded two original songs – “Behind the Mask” and “Ordinary Man”, which is about George Floyd – with Jamieson recording a piano track, me making a vocal track (both in-home studios) and mixing. Then we’ve added thematic music videos. My multi-talented producer, Lisa Steele, has done that.  I’m very pleased with how those have come out. But it’s a different beast than live performance or live recording.

Jamieson and I still play together a few times a week over Zoom but with the latency it’s basically a private pleasure.

My upcoming albums of originals include “Scratch Tracks From Quarantine” and “20 / 20.”

Monk said:  Genius is the one who is most like himself.  I’m not a genius or a himself, but I believe that the enterprise is to keep becoming more and more like yourself, and then sharing that with your audience.