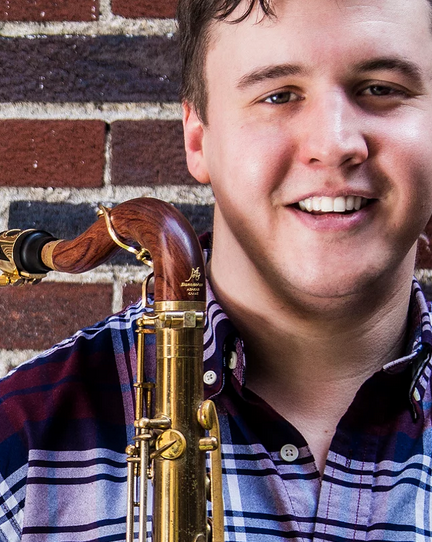 Enamored of the tenor sax and clarinet (which he’s named, see below), Nate Giroux (half of The Giroux Brothers) is working on a new album to follow 2018’s “What We Learn from the Trees.” It’s a waiting game, not knowing when things are going to open back up for performers and audiences alike. He’s got a solid foundation to build on: exquisite old-school chops, a fluid technique and an amazing ear for melody.

“Trees” has all original tracks (“Bound” shimmers and intertwines stunning harmonies between sax and horn; “Pleasantville” breathes deeply and comfortably in waltz form). In some of his earlier work there’s a good mix of originals and covers. “Lous Blous” swings in that traditional blues pattern but in a fresh way with great harmonies. The breakout solo stings and syncopates until unraveling in a chaotic explosion, and then it finds its roots.  In Giroux’s hands, the Jobim classic “How Insensitive” is soul and sadness, apology and peace offering. His spry version of “Softly as in a Morning Sunrise” sizzles and careens and is made even holier with an amazing musical exploration on bass and watertight drums. Here, Giroux is versatile, emotive and fearless.

Why did you choose tenor sax and clarinet?

One of my fondest childhood memories is sitting in the car with my dad listening to the Yellowjackets – a jazz quartet featuring tenor saxophonist Bob Mintzer. Bob has an amazing sound (warm, centered, even, commanding) and an equally amazing melodic sense. After I got “hooked on Bob,” the saxophone was the only instrument for me. As for clarinet, I picked that up before saxophone at my parents’ suggestion. My father was the high school band director in my school district and my mother was a clarinet player.

I think it probably took some convincing but I knew I wanted to be a performer, so I took my parents’ advice and started on clarinet. I sometimes still refer to it as the “black stick of death,” a funny nickname I learned from another tenor man, Pat LaBarbera. Clarinet has seen a resurgence in the clubs due to the current popularity of Gypsy Jazz and Electro-Swing music.

Who in your opinion is the master of the fat sax sound?

This is a very difficult question. I already mentioned Bob Mintzer, who has a fantastic sound. If we’re talking about living cats, I also love the sounds of Rich Perry, Joe Lovano, Tony Malaby, and Joshua Redman. That said, the “master” of specifically the FAT sax sound is, in my opinion, Sonny Rollins (Dexter Gordon a close second?). Sonny always played with a rich, deep sound that emphasized the lower frequencies of the tenor. He knew how to play pretty, he knew how to play gruff, and most importantly he knew how to serve the music.

I use past tense only because Sonny doesn’t really play anymore, but he is still with us! Sonny had an unparalleled sense of rhythm and a wonderful sense of humor in his improvising. These are all classic recordings, but if any reader is new to Sonny, be sure to check out the albums The Bridge, Way Out West, Saxophone Colossus, and A Night At The Village Vanguard.

Why did you form the Crane Jazz Band and what is the overall vibe? How did you meet the other musicians and what do they bring to the table?

The Crane Jazz Band is a collegiate ensemble at the Crane School of Music at SUNY Potsdam. I was honored by the opportunity to direct the ensemble during the 2019-2020 school year. The students at Crane are dedicated and have a great appetite for knowledge, so it was a lot of fun working with them and hearing them grow.

Talk about The Giroux Brothers.

The Giroux Brothers is a band that I co-lead with my brother, Tyler. Unlike the Crane group which is a large ensemble featuring new and classic big band repertoire, Giroux Brothers is a small group (quartet or quintet depending on the current project) that features original music and creative arrangements of jazz standards. Tyler and I write original music for the group. We mostly operate as individual composers, but this past summer we started writing collaboratively and have found that to be a fun and successful experiment.

Our music comes firmly from jazz roots but draws from many other influences including folk, traditional African music, rock and gospel to name a few.

What do you like best about performing at festivals?

Festivals are a great way to meet other musicians and celebrate the music we love. The audiences are fun because they bring a wealth of background knowledge and experience with the tradition of our music, so they are generally interested listeners! As soon as it’s safe for festivals to organize, I have a feeling attendance will be high – people are ready to get out of the house.

How have you pivoted during shutdown and what are you doing to prepare for live performances once they start up?

I am currently in graduate school, so the shutdown didn’t hit me quite as hard as many of my colleagues since I’d already had to take a break from many gigs. That said, not being able to go out and play has hit us all hard mentally. Sure there’s the hit to the wallet, but more importantly, music is my purpose.

Playing live music invigorates me, re-centers me, brings me hope and joy, and inspires me to be better – its effect is akin to a drug. Pair that with the honor of reaching other people through art and that’s a pretty hard habit to quit cold turkey.

Pivoting has been essential. I’ve played many more sessions that I used to, mostly because I didn’t have the time before but now it’s my main opportunity to make music with others. I’ve also had more time to write music and am excited to record the next album with Giroux Brothers.

Best part of producing “What We Learn From the Trees”?

Maybe it’s cheesy, but the best part of producing the album was doing it with my brother Tyler. There is only a year-and-a-half difference between us, so we’ve been close since we were kids.

It was great to make our own music (the album is all original songs) and release it as a finished product. We also are great friends with our bandmates and having their support, talent, and insight was essential.

Favorite track? That’s a difficult one. I’d have to put it between “Pleasantville” and “Tune for Mr. Ferris”.

Talk about your work with Charles Cornell and how does his deep understanding of theory and composition impact your music together?

Charles has been a friend for years now. We created his album “Tales” before he went viral on YouTube, so it’s been quite fun watching him suddenly become a known internet personality. My students at Crane watch his videos.

The album we recorded was a great experience. It was different from other projects I’ve worked on – it was definitely still “jazzy,” but Charles has this whole other thing going on with soundscapes and voices that makes his music feel like an epic journey. His ideas about theory and composition are the driving force behind that music. He had a sound in his mind and it was our job to realize it.

Giroux Brothers is in rehearsals for a new album right now. We haven’t set a recording date and we’re still writing some material, but we’re itching to get back into the studio. We also want to record a standards album, as both Tyler and I have a love for straight-ahead jazz and have played much of it as gigging brothers. We’re excited to debut fresh repertoire as soon as we can hit the gig circuit again!

Support your local musicians and businesses!