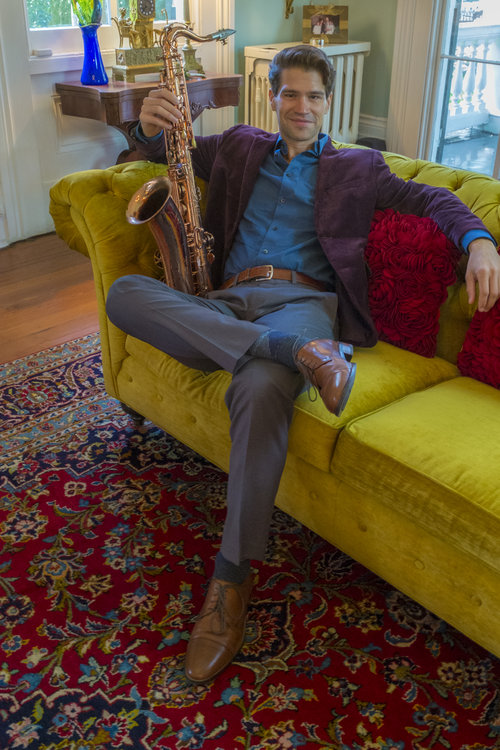 Which comes out on top: James Martin’s vocals or his presence on the tenor sax? Hard to say, because on his latest offering “Keep Movin’” he can slot himself in with any musical POV and create jazz with an immersive vibe. With a career that clocks in a lot of mileage in the New Orleans’ scene (adding to the wizardry of Trombone Shorty), the Neville Brothers and many others, the music he creates is honest fun.

Diverse songs like the pensive “French Connection” which breaks seamlessly into different tempos and features damn good vocal harmonies by Martin; the breezy “Leaf in a Hurricane” with its main line skipping and catching the breeze that leads to the sweetest sax solo; and the high-energy “Exit Signs” with its standout percussion changes make this CD inventive and engaging. Enjoying obvious respect from his band members, Martin’s new CD is tight and together, each song glowing out from its center.

How would you describe your years with Orleans Avenue?

I met Troy “Trombone Shorty” in a classroom my first day at the New Orleans Center for Creative Arts (NOCCA). He was starting his band at the time and hired a few of his classmates; myself and Jon Batiste (CBS Late Show) included. We were all in high school and that was my first professional gig. Troy and the Andrews family took me in; not just then but over the years.

I’ve performed in James Andrews’ band, I was in Glen Andrews’ band for 3 years, and I also performed and recorded with Travis “Trumpet Black” Hill (a cousin and grandson of Jesse “Ooh Poo Pah Doo” Hill. I was out performing in clubs and second lines with Troy and some of the best musicians in town while still in high school and college. It formed the foundation of my career and introduced me to the music scene.

I haven’t been in Troy’s band for years but people still remember my time then. They remember watching me in high school, college and throughout my 20’s. Now in my mid-thirties, there’s quite a number of people that have watched me grow up and develop musically. I’m not sure what my career would look like without going to NOCCA, meeting Troy, and being in his band but I’m sure it would look quite different. We traveled all over the world, the band’s first time in many places, and I met many people that I still know and am friends with to this day.

Troy helped put me on the stage with artists like Ivan, Charles and Cyril Neville; Lenny Kravitz, Dr. John, Allen Toussaint, John Boutte, and many more legends and non-legends. It was beautiful and magnificent at times but also tumultuous. It’s easy for someone to look at the band’s success and forget about all the dues we paid. We were all very young and learning. It was an experience that I will forever be grateful for because it’s taught me to be a strong and knowledgeable band leader in my own right.

When you went solo in 2008, what ideas did you want to explore having to do with new melodies, harmonies etc. that were a departure from your Orleans Avenue experience?

When I left Orleans Avenue in December of 2019, I had already been recording demos of some of my own material. Orleans Avenue is a funk rock band with jazz influences and this other material I was working on was a bit of a way to vent and do something different. The sound was rock and I perform the piano, guitar, bass, synth, and programmed beats with a live drummer; no saxophone. The melodies were catchy and Beatle-esque. After I released these demos under the name “Happy Jack Frequency” I formed a band under that name and we had quite a bit of success locally playing top venues and festivals. One of the songs on the album, “But I’ll Dream” has been streamed over 2 million times on Pandora. Unfortunately, none of this was very lucrative and I couldn’t support myself and my rock band at the same time so I turned my focus to being a top call sideman and worked producing other artist’s material.

Why did you choose the tenor to express yourself through?

The tone of the tenor sax drew me in. I was originally a guitarist and wanted to perform in the high school jazz band but the band director wouldn’t allow me to be in the jazz band unless I was also in the marching and symphonic bands. There wasn’t a guitar in either ensemble so the band director suggested that I play the cymbals since I could read music.

However, my dad played clarinet and tenor saxophone in high school and he introduced me to the sax. He bought me a pawn shop tenor and I instantly fell in love with it. For the first few years, I hardly put it down. I was infatuated with the tone of guys like Joshua Redman and Sonny Rollins with all their warmth and bite. That’s the sound I wanted to use to express myself musically.

What was the best advice you got about a career in music?

The best advice I ever received was from my saxophone instructor, Steve Goodson, who has had quite a career as both a musician (Solomon Burke, The Commodores) but also as an internationally recognized repairman and saxophone designer (Saxgourmet). He taught me all about the horn and about the business and what he told me I’ll never forget. “If you want to be treated like a rock star, you have to act and dress like a rock star.” He would challenge me with difficult saxophone exercises and classical etudes, then remind me to look the part; to make sure that no one in the crowd confuses you for a member of the audience.

Is there an order of what you love most (sax, composition, singing) or do you try to do them all in every project?

It’s hard to pick a favorite. For me music is a way to connect and communicate. I guess the easiest answer would be that when I get up on stage and I’m able to get the crowd singing and swaying to my lyrics and clapping after my solos, I feel the most fulfilled.

I love improvising sax solos on stage when all the musicians are listening to each other and we’re creating together in the moment. I also love how I can express deep feelings and thoughts in lyrics and chords patterns. The sax, singing and writing are all like different brushes that I use to paint my music.

Your first 2 albums: a short synopsis of what it was like producing and recording each of them?

My first solo album “Blue” (2012) was recorded at a time when my band would only perform once or twice a month. The album is produced with layers that I was unable to perform live (background singers, horn section, etc.). For the most part, I had the whole concept in my mind and I hired top-call New Orleans musicians to lay down my vision.

The second album “Something’s Gotta Give” (2017) represents an important transition in my career from principally a sideman to frontman. In mid-2016, I cleared away all distractions and dedicated myself fully to my own band and career. For the first time I had a group of consistent band members performing my music on a regular basis.

In the last few years, all the hard work and determination has begun to pay off. My band upgraded to the top venues in New Orleans and we started playing international venues and festivals. I also added a pianist and a Cuban percussionist. I pushed myself creatively as a songwriter and was able to introduce my new ideas and concepts to my band as quickly as I could write them. The sound is full, rich, and tight without many overdubs or studio magic. In fact, many of the performances are live. The scratch tracks were often the best takes.

Does the upcoming album “Keep Movin’” present a new side of you?

Keep Movin’ is my mantra right now. The last few years have been the most prolific of my 17-year career, having released solo albums in 2017 and 2019, while contributing to Soul Brass Band albums in 2018 and 2019. It’s quite a feat considering my band is performing 100+ shows a year and I still find time to perform and tour with Soul Brass Band in Europe every summer.

I have many goals that I’ve yet to accomplish and the subject matter in the song lyrics are often about overcoming my own doubts, fears, anxieties and believing in myself. It’s like that Churchill quote, “If you’re going through hell, keep going.” I don’t want to slow down. I don’t want to become complacent. And hopefully the result of this ambition and flourishing creativity incites the crowd to “Keep Movin'” to the rhythms.

What tracks were the most fun to produce?

“Rectify” was fun recording. There’s a lot going on musically there. Sam Dickey (Blind Boys of Alabama) lays down some intricate African guitar rhythms that fit nicely with Cesar Bacaro’s Cuban-styled congas, all this layered on top of Thomas Glass’s (Iggy Pop) funky swinging drumming. Pianist Oscar Rossignoli came in and laid down a flawlessly brilliant first take and “Tuba Steve” Glen’s playful sousaphone lines give this song a familiar but unique sound. “Young Ambition” was originally going to be the first single from the album but it was obvious in the studio that this performance of “Rectify” was something extra special.

Top qualities of your band members?

Walt Lundy (Bonerama and Corey Henry’s Treme Funktet) and Tuba Steve (New Orleans Jazz Orchestra) have played so many gigs with me that I feel like they’re reading my mind sometimes. Everyone in my band is a world-class musician that performs to a degree of virtuosity, creativity, and professionalism that is exemplary on the album.

Photos courtesy of and with permission of James Martin.