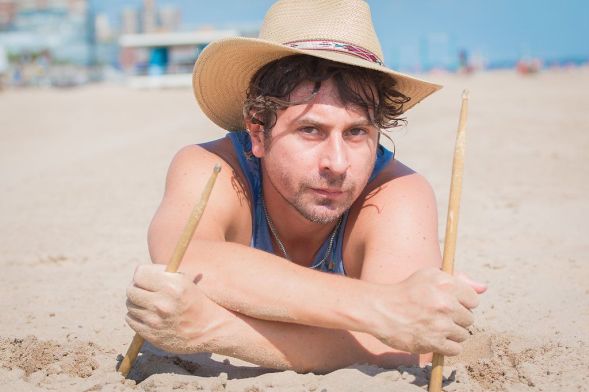 Just released June 1 is an oeuvre by self-proclaimed folklorist and drummer Sean Noonan, who is deeply moved by sounds and traditions of global cultures. “The Aqua Diva” is simultaneously melodic yet unsettling; rhythmic yet shifting in its time-perspective; and with meshing yet jarring harmonies. He narrates and sings his stories, inspired by the lore found in different corners of humanity. “Butterflies Away” has a campy feel and the energy is tornadic. The assertively chanted “Elijah Rocks” is sassy and bluesy, and “Where Would I Go?” is contemplative, poetic, wistful. This album is brimming over with its many moods and tales of struggle and triumph.

What instruments do you play and what do you consider yourself primarily?

I have always been a drummer and started learning when I was 10 years old after watching Animal from “The Muppets.”  This later progressed and I began incorporating composition and then storytelling and using my voice as part of my performances. I studied music education where I learned how to play some band instruments but it is never good to be a jack of all trades.

How did you come upon the storytelling approach to this new album, “The Aqua Diva”?

After Berklee College I settled in New York forming THE HUB, a punk-jazz trio where a near-fatal car wreck led to a long recovery that was integral to my compositional style. A commission from the American Composers Forum led me to discover the “wandering folk” theory where I collect and adapt folklore merging and re-interpreting it with a modern perspective; Bardic (Susan McKeown) and Malian Griot traditions (Abdoulaye Diabaté) with improvisation (Marc Ribot).  The theory is later expanded on Pavees Dance that fuses harmolodic jazz rock with pre-rap beat poetry by Malcolm Mooney of CAN and Jamaaladeen Tacuma (Ornette Coleman).

Producing 20 albums, I transformed into a rhythmic storyteller, wandering the world gathering tone rows, rhythms, stories, legends and folklore like a punk-jazz Alan Lomax, that are narrated and conducted with a pair of drum sticks. Basically I wander the world collecting a diverse range of all kinds of available objects to later be edited and used to serve as an overall compositional process.

What’s the highest compliment you’ve ever received on your music?

When a fan tells me they liked this album or concert better than the previous one.

What exactly is an “Aqua Diva” and how is the idea reflected on this CD?

T.A.D. (The Aqua Diva) is a character I created, and acted by Manuel Cossu in my Zappanation Rock Opera that was dedicated to Frank Zappa.  As the story is told, he is stalked and later murdered by Butterflies who is jealous of Bubbles for having an affair with him.  You can actually see this on an upcoming DVD release of my Zappanation Rock Opera and this album is a sort of prequel to that. Also “Butterflies Away” and “Elijah Rocks” are re-arranged for Zappanation and can be heard in a 90-minute rock opera with a mixed Sardinian choir, string quartet and five-piece rock band.

Well each song was a little bit of everything but probably it took a bit more time to learn “Smoking Man.”  I know Alex really loved playing “Don Knotts” because of the additive rhythms and tone rows I composed and for me maybe “As the World Spins Around Me” since it was written late when I was working on the album.

The most unexpected reaction (so far) since its release?

Well I don’t care at all what people and media really think or say about my music but I am interested in hearing their opinions so that I can be opened-minded and learn how I can improve my music. There was someone who said it is very difficult to listen to, but this album is very tonal, played within an acoustic piano trio setting with storytelling.  It is not way-out, avant-free jazz.  I guess they still have virgin hearing.

Do you think humor is an important element in jazz (I’m thinking of lines like, “Earth, why do you keep spinning around me?”)?

Well that is if what you want the music to express and go in that direction. Frank Zappa had a great sense of humor and a natural wit, throwing sarcasm naturally into anything he did.  I think any kind of emotion or message you want to convey has to be genuine and natural.

Some artists are not comfortable using humor.  I learned how to be careful with humor playing with some musicians who have this in their musical DNA.

Talk about your personnel and how they contribute to what you want to create.

Alex Marcelo on piano who is known from playing with jazz legend Yusef Lateef has been a loyal friend and collaborator going back to 2004, and is also featured on previous albums “Memorable Sticks” and “Set the Hammer Free.”  He had a big impact on the development of this album and also this summer we recorded a new album, “Pavees Dance,” that will come out next year.  I met bassist Peter Bitenc through Alex and both of them were the rhythm section for drummer Mike Pride, who is a fantastic musician as well.  I am blessed to have these guys back me up and the music on “The Aqua Diva” is a big progression from our first album.

Where is your home base and what is the music scene like there?

These days I am spending my time between London and New York and I am more involved in the European music scene since that is where I perform more. I am working on projects on both sides of the Atlantic.

What’s the biggest challenge to being a musician today?

Adapting to what the internet, streaming and social media have done to the industry.  This has happened so fast and is in its early infancy. You really need to be on top of what technology is doing to change the business, and be able to adjust your business model around that.

If you could convey just one idea through your music, what would it be?

Every sound, performance or song I compose I want to put the listeners in a trance, hypnotizing them, taking them to a new place, world or dimension. In that moment I want to make them unaware of anything going on in their lives and to not perceive time as we typically feel it.

Photos courtesy of and with permission of Sean Noonan.