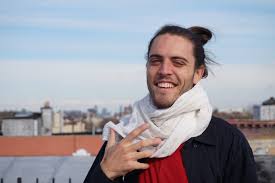 Composer, harmonica player and percussionist Yotam Ben-Or is an explorer of sorts, having very little formal training but giving himself over to a great, big love affair with the harmonica. His inquisitiveness has reaped heaps, as he’s got the chops to carry his debut CD, “Sitting on a Cloud.”

Throughout the album, his smooth use of flourishes and trills on harmonica are as exciting as his perfectly reached highs, and lows that never break apart. Embracing the role of melody maker, Ben-Or sparkles with a talented ensemble.

The track “Ebb and Flow” starts with succinct musical sentences from harmonica while percussion deftly adds a gentle pulsing rhythm. An unplugged and reductionist version of this song (found on YouTube) gives the listener a means of comparing Ben-Or in different environments. The tonal conclusion is the same, though: he is a gifted artist, letting out the joy from inside with complete control and a deep appreciation of the way this instrument needs to be handled.

A light-hearted song that might be about love or the sweetness of a sunny day is instead named for the small, ignored things in life: “Song for an Ant” – a tiny song itself that is enchanting. The waltz-feel “Astar” has a swirling spirit emanating from harmonica, while the bounce of “Enyaw” has some funk and bite. Dig that bass too.

What drew you to the harmonica?

When I was about 10 or 11 years old my mom sent me to study piano with my uncle. At that time he had just started playing the harmonica so he was excited to show me some stuff on it and I fell in love. I liked taking the harmonica with me everywhere I went and finding new melodies.

What are the particular challenges of learning and taking care of the instrument?

In terms of learning the chromatic harmonica, it’s that there are almost no examples of people who did great things with it to learn from and get inspired by, unlike the saxophone or piano or almost any other instrument. But with some imagination you can actually transform this challenge into something positive by studying what was done on other instruments, applying it to the harmonica and creating something new.

Also the fact that not much has been done with the chromatic harmonica leaves you a lot of room to develop new stuff.

It was a gig with two friends of mine, a guitar player and trumpet player, in a café close to my hometown. It was a lot of fun. I remember that we played the song “I Can’t Get Started” and I didn’t know the melody in the B section so the trumpet played it.

The most important thing you learned about music from your formal education?

School is just an introduction. The real learning is done on your own and from experience.

What have you learned on your own about the music business that young people today should know?

Not to take things personally. Concentrate on the music and be honest.

I think it might be The Jazz Gallery because it feels like they are really there for the musicians and people are going there to really listen to the music.

What do you enjoy about performing in Italy?

The last tour we had in Italy was organized by a drummer from Rome (Francesco De Rubeis). He showed us around and it was really nice. Also he played with us on this tour instead of the regular drummer of the band (Noam Israeli), so new ideas and sounds came up and it was cool.

Talk about the release show of your newest album, “Sitting on a Cloud” – what was most enjoyable about it?

The release show in NY was great. Both sets were packed and the audience reacted beautifully.

What was the hardest part of production?

Finishing up and releasing the album was the hardest. As long as I was working on it I could always change things, cutting here and there, changing the order, etc. But once it’s done it’s done, and I have to be happy with the decisions I made.

Personnel on this CD?

I love all of my friends that are on this album and they’re all incredible musicians.

I’ll start with the members of the quartet and the mixing guy because they are really the core of this album and had a huge impact on the music.

El Venezueliano Gabriel Chakarji on piano. I met him when I first moved to NY in August of 2014. We went to the New School together. Gabriel has been playing my music since we met and knows it so well. He’s an incredible musician and an amazing composer.

Alon Near on bass. Alon and I became friends and started playing together around 2011. We had a band together back in Israel that was called Jupiter. Alon is a KILLING bass player!

Ofri Nehemya on drums. Ofri and I also met somewhere around 2011 in Israel. He’s actually not a regular member of the band and he joined us especially for the recording of the album. We played a couple gigs prior to the recordings and what he did with the music was so beautiful. Ofri is such a creative, musical, sensitive and tight drummer. Ofri was the perfect drummer to record this album.

Noam Israeli on the mix. We met in NY only about a couple of years ago. Noam is an incredible drummer, musician, and producer and he had a huge impact on the post-production part of the album. He’s the regular drummer of the band now but didn’t play drums on this album. We didn’t talk about it yet but I think I would like him to produce our next album.

As guests on the album are my beloved friends and great musicians:

Listen to the album. It’s good.

Photos courtesy of and with permission of Yotam Ben-Or.