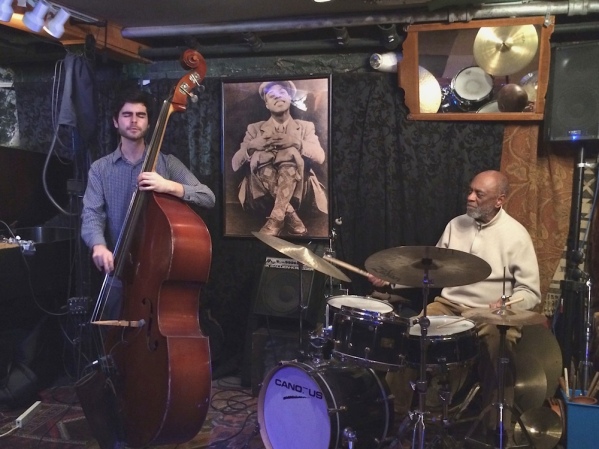 A musician with an impressionist’s touch, Martin Nevin is a bass player with heart, patience and the ability to spin beauty out of thin air. His new CD, “Tenderness is Silent,” has a touch of melancholy with a quietly building joy lain in between the notes. Paired with the phenomenal pianist Sam Harris, Nevin adds a dimension of richness on the title track, inventing (with a light touch) perfect-bites of phrases that add bands of color to this song. The drums fill the spaces with satisfying brushwork in this misty aural poem.

“Sculpting in Time” leads with a woodsy sax joined by another sax which keeps its subtle place slightly underneath the main line. Partway into the track, Nevin stirs up energy and it feels like double time. The rhythm switches back and forth between original/somber and a jarring energy…all while the bass is plucked sonorously, in perfect respect for the story of the music.

A bit of a slow swing feel hits the listener in “The First of Many Exits,” kinda sexy and kinda moody. This track has a hot vibe that shows off everybody’s talents with stunning effect.

Why did you choose the bass?

I think the bass suits my personality. I generally don’t like to be in the front or the center of attention.

I enjoy subtlety and the role of the bass can be very subtle. But you can entirely shape the music with every note, every rhythm that you play.

The bass player is the architect of the music. The role of the bass is to try and create the conditions where the music can flourish. A musician’s personality and their way of relating to the world will come through with any instrument he chooses.

Who is your inspiration in jazz?

My biggest inspiration at the moment is Henry Threadgill. He’s as uncompromising and original an artist as you can find. His records are sound worlds that seem to be inconceivable until he creates them. His vision is total and he thinks about every detail with the music he creates. He constantly evolves and seeks new information. He’s a masterful composer and he’s not trapped inside any boundaries of genre; everything is fair game for him to draw upon.

The bass is very involved physically. It’s big and bulky and sometimes the first instinct is to try to manhandle it or beat it into submission.

The challenge is to become unified with the bass so you aren’t fighting it. You want to overcome the physical obstacles in order to reach the same emotional expressiveness of two things: a human voice and a drum. You need a certain level of control on the instrument to do that, to be able to translate what you hear in your head to the instrument. You chisel away at the barriers between you and creating the music you want to create.

Biggest challenge to marketing your music?

The way most people take in media these days is through quick, attention-grabbing clips. Most people shuffle through their iPhones from one artist to the next on Spotify or check out short Instagram videos until the next one starts playing. (I do it sometimes too.)

My music doesn’t really lend itself to that kind of experience. The pieces sometimes build over a period of time, and some stay in quiet, more peaceful zones. The music tends to encourage contemplation and self-reflection.

Among the venues you have played in the US and abroad, which one stands out?

I was fortunate to do a five-week State Department-sponsored tour of Africa in 2015. We played on an outdoor stage in Kinshasa in the DRC. It was a warm night and the audience was sitting on old bleachers. The sound equipment was old and not high quality. But there was a communal feeling to the concert, like the audience and the musicians were taking part in something together.

The venue itself wasn’t remarkable in any specific way, but it was the atmosphere that made it such a memorable experience.

Sometimes you can play in a very nice club and the experience can feel very average. I’m interested in finding ways to have that communal feeling regardless of the venue.

What is a “song cycle”? And talk about your grant.

It’s a set of songs with a common theme. I received a grant called the Jerome Fund for New Music from the American Composers Forum. I’m setting to music the poems of Jonathan C. Creasy, a poet and non-fiction author who has been living in Dublin for the past 10 years. He wrote these poems while taking part in the Lannan Residency in Marfa, Texas. It’s an artsy town in the middle of nowhere in Texas and the poems definitely evoke that landscape.

The songs are reflections, set against that desert backdrop. It’s new and exciting territory for me as I’ve never written music with lyrics before.

What does “Scratch at the Same Table” refer to?

The title comes from the final poem of the set where Creasy writes, “I sleep where great poets have slept/And scratch at the same table.” It’s the idea that an artist works through the same ideas, issues and dilemmas of the artists that came before him. It’s both a heavy burden and an inspiration to sit at that same table as the old masters. The reflection of what it means to be an artist is a theme throughout the poems.

What ideas inspire you when you write?

It’s impossible to boil it down to one or two ideas. Everything an artist does, sees and interacts with comes into play when he creates. It’s possible that when I write music I’m inspired as much by a conversation I had with my neighbor as by a film I saw or book I read. Inspiration is a strange and unpredictable thing.

Where do you go in your head when you perform?

The goal is to get to some kind of meditative place. I want to be calm and receptive.

What is the most difficult part of arranging for an ensemble?

Each ensemble/instrumentation has its own set of considerations. You have to think about balance, what register each instrument sounds strongest in, and how different timbres sound when they are combined.

I mostly write at the piano so the question is how to expand the material from the piano and make it work with the full ensemble.

In terms of the group on the record, it has become easier for me to arrange for them because I know their playing so well. I hear their particular sounds in my head when I arrange for them, so at times I’m arranging and composing at the same time.

In your new CD “Tenderness is Silent,” how would you characterize the overarching feel of the music?

Contemplative, maybe also nostalgic. Some of it is dreamlike. The album is a book of music that goes together and is structured in a specific order. Each piece stands on its own but is part of a greater narrative.

Which track turned out to be the biggest surprise?

“In Wax” was originally a quintet piece. The final section where the piano improvises was initially a faster, more energetic section with a saxophone solo. After doing some quintet takes in the studio, we decided that it was better to try it as a trio (piano, bass, drums). It was gentler, and got to the heart of the composition more. We slowed the section at the end down and modified it a little. It breathes better now. 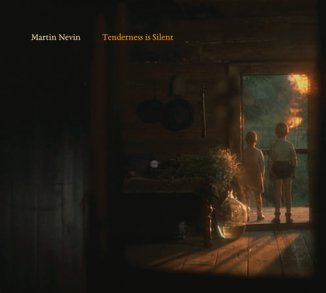 Which track is your favorite?

My favorite track is “I See it Feelingly.” The first section has a reflective character that can be found elsewhere on the album, but ultimately the piece embodies a triumphant, life-affirming feeling. Roman improvises in a way that is joyous and moving. To me the group sounds wholly unified, and when Sam takes over he plays these dense, earth-shattering chords in a way I’ve never heard the piano played before. It’s the closest the album comes to achieving a feeling of praise or exaltation, an emotional atmosphere I associate with gospel music.

Talk about your ensemble.

The foundation for the group is Craig Weinrib (drums) and Sam Harris (piano). We’ve played as a trio under Sam’s name for about eight years and we’ve spent countless hours discussing and working on music.

Making music with them feels like home for me. Their playing elevates and moves me. Craig has a wonderful way of seeing the big picture, of understanding the essence of a composition and using the drums to guide the band with a sense of the overall narrative. I mostly write music at the piano, so the piano parts tend to be pretty dense.

Sam has the rare ability to absorb a complex piece of music and very quickly make it sound like he wrote it himself. Like Craig, he finds the emotional core of a piece of music and creates something personal and poignant with it.

In terms of horn players, I’m really interested in working with musicians who see themselves as members of an ensemble and who are concerned primarily with how they can contribute to the overall sound of the band. (A solo is just one orchestration option, one possible texture.) Roman Filiú is one of the finest composers I know, and sees and performs my music with a composer’s sensibility. His playing is elegant yet deeply soulful. It can be reserved and it can be wild and sometimes it makes me want to put down my bass and dance.

Kyle has a gorgeous sound and amazing ears. He establishes a deep connection to the rhythm section by intensely listening and tuning into what’s happening around him, leading to improvise in a really pure way. The music on the album was written and arranged specifically for these four extraordinary musicians.

What do you want audiences to know about your quintet that they might not know?

The music doesn’t have a specific meaning that needs to be decoded. It should mean something different to each person who hears it. People often say “I really liked that but I don’t really know much about music.” I want people to forget the idea that they need to know anything at all before hearing the music.

On August 1st I’ll be presenting a new instrumentation with Chris Hoffman on cello and Pawan Benjamin on bansuri (wood flute). Rather than focusing on which instruments I want to use, I like to think of specific musicians and what they can bring to the music. Pawan has an incredible way of evoking a tranquility and sense of peace with just a few notes on bansuri.

Chris is a one-of-a-kind. He has worked with Henry Threadgill for years and he’s a fantastic improviser on the cello. He can play it like a bass and can also create a singing tone with the bow. The group will also include David Bryant, one of the most powerful and thoughtful pianists I’ve heard. The combination of bansuri and cello presents a lot of interesting textural possibilities.

Photos courtesy of and with permission of Martin Nevin.