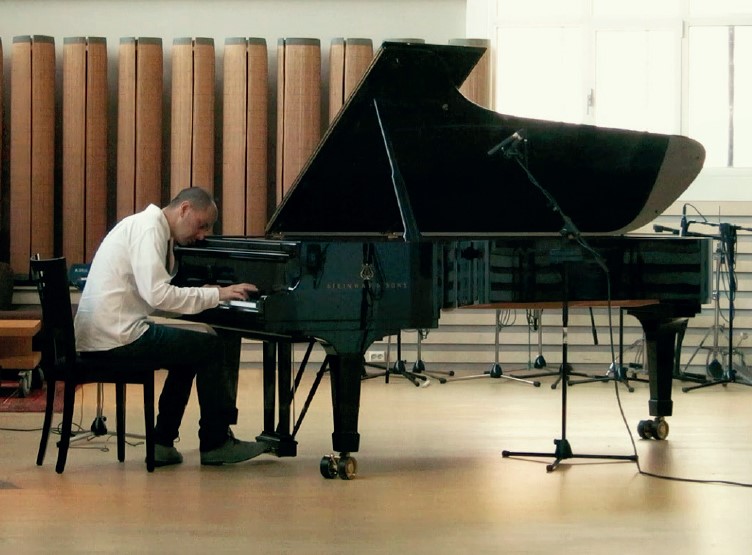 A one-man recording has to be darn near excellent to stand on its own, particularly when it comes to jazz piano. Stefano Travaglini absolutely delivers with his new CD “Ellipse.”

The track “Softly, As in a Morning Sunrise” takes wide liberties with the jazz standard and, in pianist Travaglini’s hands, becomes a fugue that finds its way to dissonant intervals. He is totally at play with his improv, pulling apart the architecture and building it up into something brand new.

A place of peace and soft regrets arrive with the track called “Goodbye For Now.” This song paints a wistful landscape, using phrases that inhale and exhale, saying “this is life, and sadness is part of the experience.” The CD’s strength is its honesty regarding human emotion; its tunefulness that bends around corners; and its inventiveness in walking the tightrope over jazz to one side and classical on the other. Masterful.

I started playing with a keyboard since I was three years old. The first instrument I studied at music school was the oboe, but I have always focused my interest on the piano. Subsequently, I graduated in Composition and in Orchestral Conducting.

Were you always focused on music?

Sure! I started unconsciously to improvise since the age of 11 and even today I feel that I still have a lot to research.

“The Hungarian Songbook” sounds very multi-layered, influenced by many traditional music types. Why did you write this CD?

I am a great lover of Bela Bartok’s music. Magyar (Hungarian) singer/actress Fatime Halmos and I decided to devote our attention to an improvisational project based on Hungarian folk melodies, and she was impressed by the fact that I already knew many.

My goal was to give them a different light in each concert and I can guarantee you that Fatime was very worried about this because we never knew where we would end up!

Does it convey a cultural or societal message?

I don’t know if we can talk about such a high message, but the intention was to let the world know the purity and the beauty of these melodies by presenting them in a contemporary language.

Your new CD “Ellipse” is uncut and unedited. What was your notion as you went into the studio?

The first eight tracks were recorded as you hear them on the record. The last one was preceded by the time of a sandwich. I think that when you record improvisations, it’s a good thing to avoid any kind of editing to preserve the original message, even if you listen to it again we know we could do better.

How did you deal with unintentional notes when doing this free-form?

The big picture is more important than the “wrong” note.

Are you pleased with the results of this “non-method” way of creating a CD?

Yes, after receiving some praise I’m quite satisfied. After all, it’s just a record. I hope I can do others like that. In my opinion this kind of work requires as much method as a recording on Chopin or jazz standards would require; in each work the attention is focused on a different element.

Did you have different expectations for each particular track?

I didn’t really have any expectations. This record was supposed to be a stream of consciousness and so it was. For example, I had not at all planned to play “Monk’s Mood” but at that time it was necessary.

Talk about “Piano Solo” and what was in your head when you played it.

I am unable to tell you what was going through my head at that moment. But I can tell you that in order to have the strength to improvise for a whole hour, a great preparation on several levels is necessary.

First of all, it’s necessary to acquire a good ability for concentration. Then there is the problem of musical language; to be able to have so many arrows in one’s bow for melody, rhythm, harmony, form and musical gestures. I like to think that a natural control of these parameters may be possible.

What are the challenges in playing without accompaniment?

Playing alone is always a great challenge. I find it very fascinating that you can do what you have in mind but if you think about it, every note you make has an incredible weight because it is there alone!

I had decided to make this recording before turning 40. Mission accomplished!

Do you ever “hear” other instrumentalists in your mind while you play?

I always have in mind other instruments. They are an incredible incentive to make sense of the music.

What classical and jazz masters influence you?

I don’t know if they really influenced me but I can say that I love unconditionally the whole work of Gustav Mahler (Symphonies and Songs) and probably the “Concert in Copenhagen” by Lennie Tristano (1965) has changed my views, maybe because I had discovered it at a particular time.

Obviously, there are hundreds of wonderful musicians that I have not mentioned, of which it is natural to be indebted.

What meter do you favor? What key or mode?

Absolutely I have no preference. These are details that I choose based on what I want to communicate.

Talk about needing a sense of humor when composing (“The Importance of Fishing”).

I listened to “Ellipse” for the first time after a week.  I still didn’t know if I would have published it. During the next few days I decided that would be my new album and I started to give a title to each track, looking for a common thread and especially feeling inspired by the music.

The first song immediately reminded me of the concept that amazing director David Lynch expresses in his book Catching the Big Fish: Meditation, Consciousness, and Creativity. He says, “Ideas are like fish. If you want to catch little fish, you can stay in the shallow water. But if you want to catch the big fish, you’ve got to go deeper.” So, I felt like that: looking for an idea!

In addition, there was a strange coincidence, because at the end I quote the main theme of “Des Antonius von Padua Fischpredigt” by Gustav Mahler. You are right talking about humor although they are rather serious concepts, but you must not take them too seriously otherwise the music is likely to never take off.

What is the most encouraging about the jazz scene in Italy today?

In Italy there is a myriad of jazz festivals. The audience is usually rather curious and there are some extraordinary musicians; just think about pianists like Stefano Battaglia, Enrico Pieranunzi, Stefano Bollani, etc. I believe that for every musician in the world it is a pleasure to perform in my country.

What is the most frustrating?

When you leave Italy and come back, you know how beautiful this country and its people are. A lot of things are not going well in my country but it remains one of the most popular destinations in the world.

Your favorite venue in Italy and why?

In 2012 I performed solo piano in the play “Commedia” by G. B. Corsetti, in the central square of L’Aquila in the heart of the so-called “red zone” [at high risk for earthquakes].

Imagine a town ghosted by the violent earthquake dated back to 2009. It was probably one of the first concerts to revive the old town and it was very exciting to be there.

Your favorite venue internationally and why?

I can remember among many, a venue in a small town of Hungary: Hatvan. We held a concert in the municipal library with the project “Hungarian Songbook.” It was full and the audience was incredibly attentive and involved because we were performing some very popular melodies that these people knew since they were kids. I remember embracing dozens of people in tears at the end of the concert.

What do audiences most want to know about you?

Maybe about my musical background and they wonder why I play so many instruments.

For those who are puzzled by the abstract quality of these songs, what should people keep in mind when they listen—or HOW should they listen?

There’s an underlying speech to make. On average we are used to living music as a background of our daily activities. So much music, like mine probably, requires such attention that it prevents other activities. That’s all.

Photos courtesy of and with permission of Stefano Travaglini.