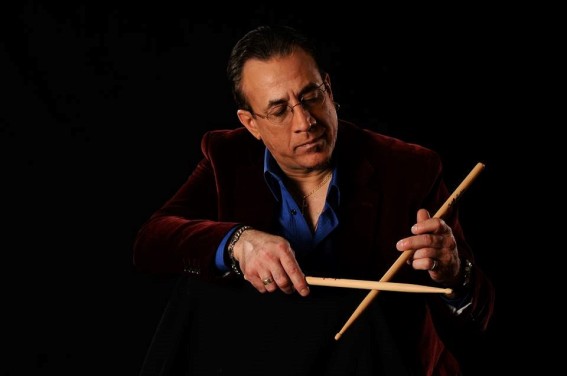 Bandleader, sideman, composer/arranger and superior percussionist Bobby Sanabria has a new project to honor whom he believes is one of America’s greatest composers ever: Leonard Bernstein.

Though there have been many versions and interpretations of the musical “West Side Story,” Bobby has “reimagined” the story and the score from a Latin jazz perspective, turning it inside-out.

The resulting commemorative double CD, “West Side Story Reimagined,” is scheduled to be officially released to the public on July 20, 2018 on the Jazzheads label in conjunction with the year-long celebration of Maestro Leonard Bernstein’s centennial.

The creative forces involved in this large-scale project have produced an impressive work that respectfully honors the exquisite music of Maestro Bernstein while giving a fresh, edgy and highly current look at the issues within: class, race and love.

What was the inspiration to take this classic “West Side Story” and re-write it?

West Side Story first premiered on Broadway back in 1957, which happens to be the year that I was born. I had the idea of celebrating its 60th birthday (2017) as well as mine by redoing the score, but with a completely new Latin jazz approach.

When did you begin this project?

What specifically about it – the storyline, the melodies, etc. – resonates with you?

The fact that jazz was such a big part of it as well as Latin music. The characters of the Puerto Rican Sharks resonated with me because I’m Puerto Rican and grew up in the South Bronx. I suffered many of the indignities of bigotry and racism that the characters (the Sharks) in the movie experienced. The story itself is timely because we’re still dealing with racism, cultural insensitivity and hatred, particularly with the current administration in the White House.

Do you remember when you first saw it and what your reaction was?

I first saw the movie of “West Side Story” when my parents took me and my sister Joanne to the then-luxurious Loews Paradise Theater in the Bronx in celebration of the movie’s 10th year (the film had been made in 1961).

I was completely flabbergasted by the virtuosity of the music, let alone the dancing. That’s when I was first exposed to Maestro Bernstein as a composer.

In what ways have you re-imagined this music?

Where the original show was about the Puerto Rican community supposedly encroaching on the white ethnic working class, gang warfare, and two doomed lovers, today it is the so called gentrifiers who are now invading our neighborhoods, displacing our communities. These are neighborhoods that were abandoned by working-class whites who were fleeing out of fear, ignorance, redlining, planned shrinkage, governmental malfeasance and political corruption.

For example, in the mid-1950s during the creation of “West Side Story,” Rafael Cortijo had just started to adapt the Puerto Rican bomba style to the dance band format, and plena was just starting to be adapted to the big band format by Cesar Concepción. Thus, that aspect of Puerto Rican culture wasn’t present in the original score.

With the added rhythmic intensity of the music of the aforementioned cultures, “West Side Story Reimagined” highlights even more how our city has been an incubator of culture but still struggles with the ignorance of hate, fear, racism, sexism and cultural insensitivity; and yet somehow we still survive and thrive, but through the lens of the Latin jazz musician.

Talk about the Multiverse Big Band.

The band itself is four trumpets, four trombones, five saxophones who all double on flute, clarinet, and soprano, piano, bass, congas, bongo/cencerro; and an extra percussionist who handles all of the smaller hand-held percussion; and yours truly on drums. For this score I’ve also added a flute/piccolo specialist as well as an electric violinist.

The musicians themselves have to be extremely versatile. They not only have to be jazz improvisors and great readers, but also have experience with Latin music styles from Cuba, Brazil, Puerto Rico, etc., as well as be able to deal with funk, R&B and the avant-garde. The band is interesting on another level in terms of age range. Our youngest member is 20 and when we use our regular vocalist, well, he’s 84.

What do you believe is the overall spirit of this musical that you wished to capture?

Besides the story being timeless, the music itself is a perfect vehicle for jazz soloists. Bernstein isn’t looked at as a jazz composer, or for that matter a composer of Latin-based music. He wouldn’t have been able to compose the music for West Side Story if he hadn’t been influenced by and had a working knowledge of jazz and all things Latin. Just listen to the “Prologue,” “Cool,” “The Gym Scene Mambo” and “America” for some immediate examples.

There have been a few Broadway revivals and re-writes. How is your score fresh and different?

No one has ever attempted a complete Latin jazz approach to the score.

Do you have a favorite song in it?

“Prologue” and “Cool.” Bernstein was so innovative in his use of the tritone. The tritone (sing the first two notes of the three-note whistle at the beginning of the show) was considered by the ancient Catholic Church to be the musical interval of the devil. It sets up a mysterious tonal ambiguity from the very start of the show. As musicians, we also call it the “augmented fourth” or “diminished fifth,” and it remains harmonically unresolved. It gives you a feeling of unsettling incompleteness, yearning, foreboding, mystery and ambiguity; finally resolving with the third note of the whistle.

It was the interval that opened the flood gates for modern jazz harmony in the 1940s in what became known as bebop. It is no wonder that the Catholic Church in medieval times forbade its use. Bernstein made it the musical DNA of the whole score.

Who collaborated with you on this project?

All of the arrangers, several of whom have been former students of mine. They did some fascinating, ingenious treatments of the songs under my supervision.

For example, Jeff Lederer’s treatment of “America” readily comes to mind. In his arrangement he incorporated several of the national anthems from the countries that President Trump has attempted to ban entry into the U.S.

Is there a higher message in the music; for example, political or social?

We’re still struggling with the question, “How does one fight hate, how does it not consume us?” I think in “West Side Story,” Maestro Bernstein had the answer: “This will be our reply to violence: to make music more intensely, more beautifully, more devotedly than ever before.”

Have you ever been involved in a project of this scope?

Several, including all of the big band CD’s I’ve recorded which have been large-scale projects. But none to the extent of this one both on a musical and personal level.

How long is it?

About an hour and 30 minutes, but it can be extended longer.

When will it be released? What are you planning as far as events surrounding its release?

Either June 2 which is my birthday or sometime in July. It will be released on the Jazzheads label.

We’re performing the score this coming March 17 at the Hostos Center for Arts and Culture in the Bronx, and August 12 in a mega-concert at Lincoln Center called Out of Doors which is timely because Maestro Bernstein’s 100 birthday is August 25th.

Will it have a theatrical run or just be a recording?

There is some interest by several performing arts centers across the country in having it performed there. But I would love to perform it at some jazz festivals as well.

How will you market this?

It will be a special commemorative double CD.

What was Dizzy’s Coca Cola’s reaction when you first approached them?

They loved the idea because it coincided with a series of events celebrating Maestro Bernstein at Jazz at Lincoln Center at the same time.

What has been the most significant take-away from working on this project?

A deeper appreciation and respect for the incredible depth, complexity and beauty of Maestro Bernstein’s talents as a composer. To combine modern jazz, Latin styles, lyric opera, vaudeville, orchestral, chamber music and Broadway in one entire, organic whole without it becoming a parody of itself is simply amazing.

He’s probably the greatest overall musician this country has produced. In my opinion he’s one of America’s five greatest composers who have utilized or been influenced by jazz. For me they are Louis Moreau Gottschalk, George Gershwin, Duke Ellington, Don Ellis and Leonard Bernstein

I think the jazz community has been missing out on Leonard Bernstein’s compositions as vehicles for jazz expression. Hopefully this CD will help to change that.

This year besides being Maestro Bernstein’s 100th birthday, it’s the 20th anniversary of this band. I’m very proud of that because my big band is the longest continuously run Latin jazz orchestra in NYC. This CD will be my 10th as a leader. So it’s a very good year!

For more information, visit www.bobbysanabria.com and for ticket information visit this link.