Swinging in the Cool Breeze with Vocalist Luiza Meiodavila 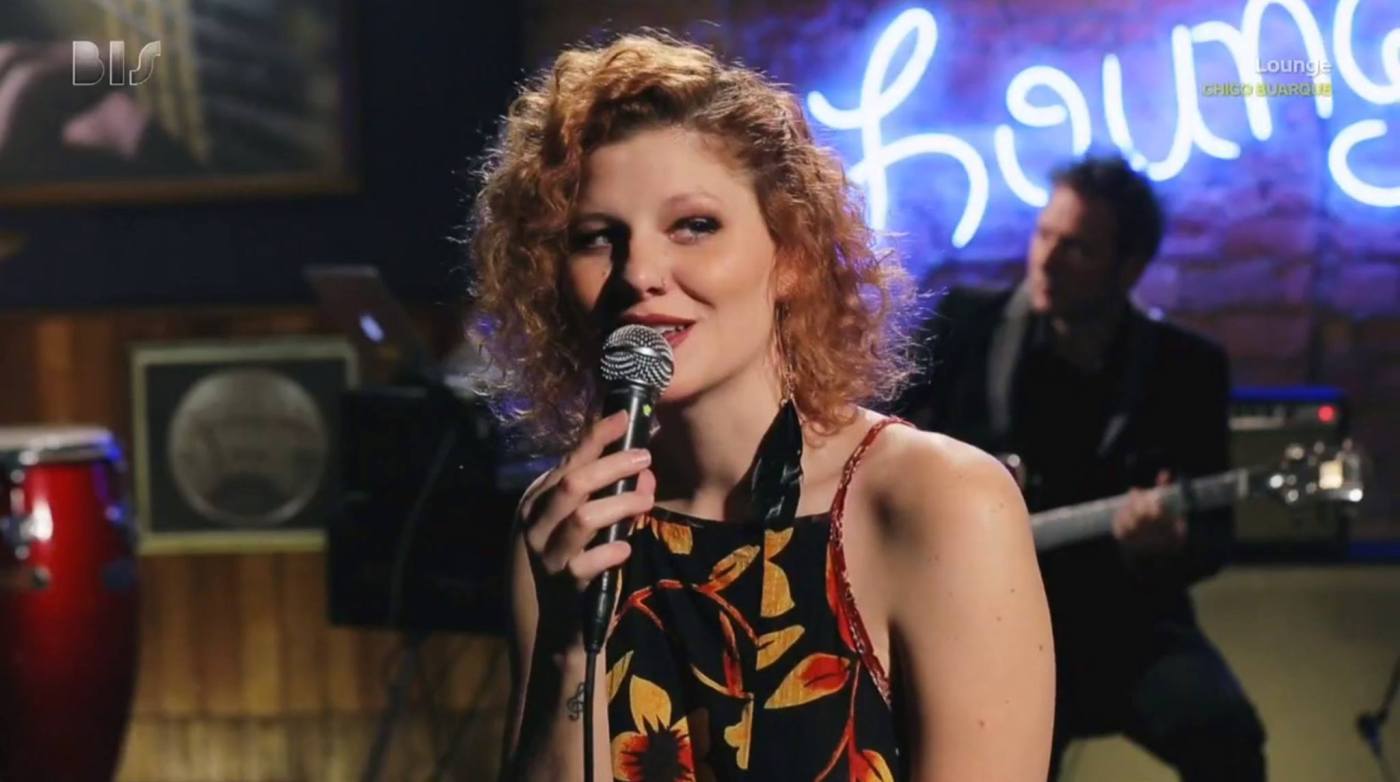 The ethereal song “Sabes” from singer Luiza Meiodavila’s recent CD “Florescer” is a harmony-infused flight that displays delicacy and quiet strength. She brings the song home with expert assistance from the piano. “Doce de Coco” sports a gypsy-jazz type of vibe, with playful stops and starts from the guitar (that would be Luiza’s husband, Zé Victor Torelli), and in the melancholy “Mar de Devaneios” her voice is like pure, fresh water from a mountain creek.

A singer with Brazilian roots who now, with her musician husband, lives in Berlin, Luiza adds a filigree touch to the mid and upper registers and imbues joy into each song.

When did you realize you wanted to be a singer?

There’s a very fine line working with music, because for most musicians it has been a part of their lives from an early age, and with me it wasn’t any different. I always wanted to sing, but growing up I was never introduced to music as a work opportunity.

After I finished school I started studying cultural production, and worked backstage a few times. At some point, it became very clear that making music didn’t have to be a hobby, and I could be the one on stage.

Did your family encourage it?

My dad is a photographer, so I guess we somehow connected through art and he was very supportive from the moment I decided. It wasn’t very easy in the beginning with my mom, as she was very concerned with what that meant. Living as a musician in Brazil is a big taboo, as only few people understand what our real daily routine is about, and the media really confuses people.

My mom was worried I might get frustrated and not be able to make a living from it, but it was just a matter of understanding what it truly meant.

As I had flute presentations in school, singing and guitar recitals in music schools and shows with the school band, I had already performed. I was very shy. In the beginning I struggled with that, as it was very ironic to me that I loved making music so much but it was so hard to perform.

On my first concert after I assumed I was going to be a singer it all just fell into place, and I felt so comfortable and never so alive.

How do you stop the jitters?

I always get the jitters, and I don’t see that as something bad now. After I realized part of being a musician is understanding who you are and using that to make music, I see nervousness as all those feelings I’m about to share being there, present. In the end, it’s part of what makes a good performance: feeling it.

What was the most useful piece of advice or teaching from your studies in music?

It may sound cliché, but vocal coach Tutti Baê once told me I was focusing on the wrong thing. I was concerned with technique and how many people were coming to a concert, but she reminded me why we do it. She told me to never forget that we go on stage to share who we are, and for that we have to be someone, above all. And when we play, even if the house is empty, there might be one person who had a shitty day, lost someone or is in crisis, and our music might make their day, week or even year better. Learning to channel who we are might touch others, and it might even help them.

Talk about your fellow musicians.

In the process of production and release of my first album I always had two people by my side: Zé Victor Torelli, my husband, guitarist and the audio engineer; and Lipe Torre, who gave me his songs and taught me about being a musician.

They both taught me a lot about production and music. Lipe was more experienced in the business and had a lot to offer musically, with his compositions and arrangements. Zé knows a lot about audio and production, which helped us create a high-quality product.

Together we learned a lot and each of us really pushed the others to grow.

How exciting was it to write for and produce/record your first CD, “Florescer”?

The CD happened very spontaneously, as we originally recorded a few songs at home. When we listened to them we decided it had the potential to be professionally recorded.

The album registered a really important phase of development for me. It symbolizes a lot of research we did on different music, and a phase of experimentation and development of who I am as an artist.

What is your favorite song on it?

Each song brings me to a very different and special place. I would choose “Romance de Novela” for being the song that originated the album; the first song we decided it was worth working with. I also love the vibe of “Sister, Don’t You”!

How do you feel you have blossomed since that release?

It made me understand myself. Who I am, who I am not. Where I come from, where I want to get to.

I grew tremendously with this work, and that’s the beauty of the process. I see it as my original seed, what led me to the work I am doing now and what prepared me for what’s to come.

What elements of music do you like to innovate with?

Melodies are my thing. There is a certain type of movement in the melody that speaks to me, independent of the genre. For my next album I have been writing a lot, working on lyrics that really translate who I am and what I feel. And coming from Brazil, I want to incorporate a rich rhythmic environment that will highlight both lyrics and melodies.

Have you toured a lot with the CD?

Yes. Because it was my first album, I had to figure out who I am as an artist on stage. We played big and intimate stages, with full band and stripped down, in small cities and capitals, in Brazil and also Europe. I have learned a lot and can’t wait for the next one!

What do you hope the listener receives from listening to your music?

One of the most important impacts for me is to make the audience active, engaged in what is happening. I want to involve the listeners and bring them to the universes I create with each song. Sometimes it’s about transmitting tranquility, sometimes pain or love needs to be felt. What matters to me is that listeners accept going on a journey with me.

Do you also sing in English, or is Portuguese better suited for your music?

I always wrote in English as well, and it will definitely show in the next album. Portuguese is my mother tongue and there is a lot to be spontaneously expressed through it, so it will also be present.

What is the music world like in Berlin and why did you move there?

Berlin is an inspiring city, and that is very good for musicians and artists in general. The music scene is similar to scenes in big capitals, very crowded and competitive, but the way Germans consume music makes living from it more viable.

Berlin is very central, and Europe is a good market because everything is so close. I am very optimistic that my music will find its space here!

Did your band move with you?

The band I used to play with stayed in Brazil, with the exception of my husband. After the first album and tour, I rethought several aspects for my next projects and wanted a bit more space in the arrangements. I now have a band here, formed by us two, with bass player Carmelo Leotta and drummer Yannick Ballmann.

Is Brazilian jazz hot in Berlin?

I don’t think there are many people doing similar music here in Berlin, and also don’t think that’s bad. Germany and Europe in general have an interesting market for world music, and I tend to think Brazilian music is liked because of its exotic flavors and rhythmic sections.

How do the new songs for your upcoming CD differ from the tracks on “Florescer”?

“Florescer” was very sweet and organic. In the next album I want to express a deeper side of who I am. Showcase the dilemmas, the anxieties and a more transparent side of my being that are important to express. I want to explore more modern sound qualities, create more space and play more with contrasts.

What is the production schedule for this?

I am currently pre-producing the album, closing songs and arrangements. Still don’t have a name for it…I seem to think that is one of the hardest parts of the process, creating a universal label for so many feelings, moods and moments. Anyways, the recordings should happen in March 2018, leading to a release around May.

Did you have doubts when you began that you could make a living at it?

Absolutely! And the best advice I could give is to be realistic about your market and your definition of success. If you adjust your plans, music is just like any other business, and you will have to see it as a company – with organization, good quality productions, promotion, sales and management.

It’s not restricted by genre for me, it’s about specific approaches to music. It’s about identifying with an artist and his or her way of expressing through music. I love jazz, neo-soul, rock and Brazilian music.

I am still very new to the city and can’t say I know many places. A-Trane and Zig Zag are probably the best places to watch jazz acts. I love the atmosphere of Klunkerkranich! Yorckschlösschen is also very fun.

Where in the world would you most like to perform?

Japan is probably the biggest dream! They have a great passion for Brazilian music, and it was the first place I sold CDs outside of Brazil.

California and Hawaii are really special to me, so they’re definitely on the list. Here in Europe I still have a lot to see, but can’t wait to play in Portugal, Spain, Italy and Russia!

Where will you perform this year?

Since I am currently producing my next album in Berlin, I will explore the European market. I also expect to bring the tour to Brazil, but it might have to wait until the beginning of 2019.

Little-known fact about your music?

Sharing my original songs is really hard for me. Sometimes they sit in my notebook for about a year before I can share it with someone.

I’d like to thank you for having me, it’s been truly a pleasure! Giving a space for artists to show who they are and talk about their work is very precious, and I also thank you for that.

Photos courtesy of and with permission of Luiza Meiodavila.