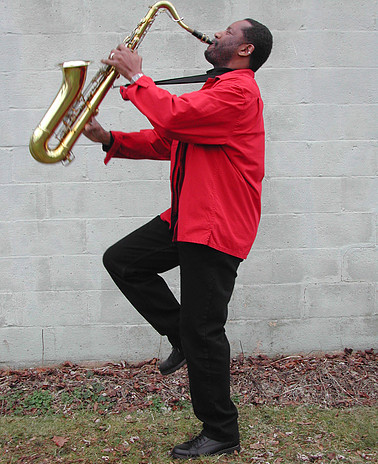 In a cover of Anita Baker’s “Sweet Love,” Lee Robinson submerges his audience in soul and sass with the soprano sax. The same soothing, honeyed quality is found in the Pat Metheny tune “James.”

Typically, though, he expresses his love via the tenor, and can often be seen breaking out the funk in songs like “Happy People.” He opens wide into “Iska’s Theme” as the perfect foil to the spirited band named ISKA, comprised of Eli Naragon on bass; Justin Vorp on drums; and Chris Potter on piano.

Lee is generous with his jazz language; a versatile musician and mentor who is truly interested in passing down his gifts to emerging young talent.

When did you fall in love with the sax?

From 1966 it was the tenor sax. I played clarinet for four years, then six months on bass clarinet prior to tenor sax.

Was your family supportive of a career in music?

Yes and no. I was playing professionally at 16. My parents were extremely strict about me playing clubs and dances with an R&B group made up of my friends. They were more supportive of my engineering education than music.

What was the most important thing you got from music?

I did not take formal music training. Playing with feeling is most important. Being able to use dynamics. Knowing the music by rehearsing is also important. Above all, make “music.”

How long to perfect your embouchure and the perfect vibrato?

You’re always developing your embouchure and maintaining it. Vibrato came naturally for me especially after learning clarinet.

How would you define your style?

I usually leave my sax sound description to the interpretation of the listener. My playing is a combination of my favorite sax players/”teachers” whom I mostly had access to by listening to records. My sound has a wide range from subtle/smooth to completely primal, raw and fiery.

What do you most like about Coltraneʼs body of work?

The freedom he infused into his playing. The idea of spontaneity. His concept of connecting to the harmonic structure of a song with notes that extend the chord itself.

What is the jazz scene like in Pittsburgh – is it artist-friendly?

Pittsburgh can be tough. There are so many good musicians and not enough venues for us. There are still venue owners who discount the value of live musicians. They always get a couple of musicians and squeeze them into a corner (double meaning!). I am lucky to have people who want to hear me perform. I also have a good music representative.

I don’t know where I go. It’s probably a different place each time or for each song I play.

It matters most where the listener goes. There is a meditative space that constantly evolves while I am playing. I am not aware of it at the time, though.

Whatʼs the biggest challenge in the music industry today?

The answer depends on where you are in your career. Whatever the next step is for you, that’s your challenge. There so many players out there. It’s easy to produce music if you have a computer and some recording software. Transforming good music into quality heart-felt music that moves listeners is a challenge.

Altering music education to include a more natural method of learning music short of being born into a family of sitar and tabla or classical violin and piano players. However, that situation presents lots of music choices for listener. Infinite choices. Choose wisely, listener, LOL!

If you are asking about the corporations and recording, the challenge may be offering music artists something that the artist cannot do for him or herself. Maybe giving the artist more control over their own careers and music.

What inspired your latest CD?

The last CD was recorded live. The Lee Robinson and Unspunt Orkestra [see below] was based on some improvising concepts of mine. I’m currently working on tunes for my next recording.

Whatʼs your favorite track on that?

I have two, “Spiritual” and “Baghdad” are my favorites.

For my group it was the Balcony Restaurant, and James Street Gastropub. Both of these have closed. For solo performances, I like the Children’s Museum of Pittsburgh because of the varied spaces there for performing.

Where in the world would you most like to perform?

Why isnʼt jazz more in the mainstream, like TV, movies, advertising? Snubbed?

That is a leading question counselor! Jazz may have been snubbed. It may also be evolving.

The music of jazz, as I see it, was designed to evolve over time. Jazz in recent times has always held about 3% of record sales. There are some radio stations that have eliminated jazz programming altogether, or they program the music in the wee small hours of the night.

Audiences and musicians can learn about jazz and see it as something new and vibrant. In classical music there are those who want to keep it as a nostalgic type of music, and not allow it to change. There is a similar thought for jazz music. “Keep it the way it was.”

People can look for evolution in the music and they will find out how exciting, edgy and thought-provoking jazz can be.

How has the jazz scene changed the most (besides the use of technology) from when you started?

The audiences have changed. There are fewer venues to perform new music concepts.

The young kids I encounter have not been exposed to live instrument sounds. Earbuds and speakers is their way of getting music. Their parents have to learn the sounds of instruments and music for themselves. They can show their children how to identify the sounds and the music. Then the kids will have an idea by being taught by their parents.

Do you think music, especially jazz, can unify us?

It is an ideal thought that music can unify and bring peace to us. Jazz originally comes from the oppression of people. It reminds people of what is possible. It evolved from emotional feelings and expression.

Talk about your band, Unspunt Orkestra. Was it experimental?

It is a word borrowed from local language; I heard it a few times when I was very young. Some of my neighborhood friends would say, “I don’t have any money for ice cream. I ‘spunt’ it all.” The word Unspunt represents stored energy that is available for release. Orkestra represents a small music group that sounds like many more…like an orchestra.

It’s totally improvised music, with very few parameters. It is a challenging thing to perform.

What was the PBS Special, “Jobs, a Way Out” and how were you involved?

It was a documentary that addressed issues of young people who wanted to leave gang life and the companies that provided them with the means to do it and start new, fulfilling lives. It was shot in five U.S. cities. The commentary was done by Geoffrey Canada, who was in Harlem at the time.

I got involved by being in the right place at the right time. I wanted to do film music. I knew someone who was working at WQED-TV in Pittsburgh, PA. I asked if there was someone to talk to about doing music for film productions, and was told there was a project about to need music. I got introduced. The producer liked my demo music and contracted me. The rest is history.

What kind of sound are you looking for?

I’m looking for a big, dynamic sound. A group of four players that sounds like ten. Musicians must use their personalities in this music. The sound ideas also incorporate some synthesizer, the use of electric bass guitar and acoustic bass. The drummer/percussionist has lots of room to create patterns along with the rest of the group members.

Plans to grow your music this year?

We’re attempting to reach a wider, more diverse audience this year. To push further into adjoining states. I’m initiating a recording plan which will help our touring efforts. Hopefully, stage performance that will include more original material and some surprises too.

I’m optimistic that there is another approach to performing this music called Jazz. I’m confident that any new concepts will be welcomed by new and old music audiences.

Photos courtesy of and with permission of Lee Robinson.