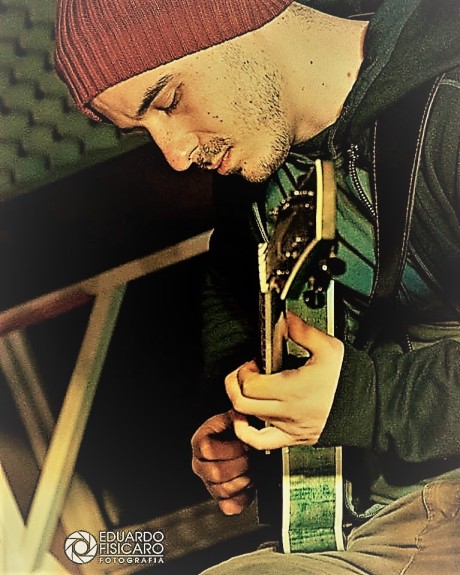 You’re galloping out of the gate from the get-go with “Inminente,” an exuberant romp led by the tenor sax who counterpoints with Carlos Saunier’s guitar. The song is from Carlos’ latest CD release of the same name.

“Tocino,” also on this CD, is highlighted by an extended, light/lightning-fast solo by Carlos who then trades the spotlight with the melodic tenor strutting some brilliant, in-the-zone phrasing. All the while, the drums keep the song tumbling forward.

The sleepy, lazy “Z” (maybe the first of Zzzzzz?) is a modern lullaby with the air-caressing sax backed by the circular stir of brushes and you’re not imagining it: Carlos’ hushed guitar only a faint echo, shadowing the sax.

A gratifying, colorful yin/yang of sax and guitar throughout the album makes “Inminente” a journey that stretches in different directions, doubles back, and pushes the tall grass aside to make a new path.

Why the switch from piano to guitar?

I got my first guitar when I was 13 and I immediately feel in love with it, it simply outmatched the piano in every sense to me. I was very impressed by the sound it could produce and so without thinking too much about it, I decided I was going to spend my time with the guitar.

What jazz artists turned you from rock to jazz?

I vividly remember my jaw hitting the floor when I first saw John Scofield live in 2007. It was a bit of a watershed moment for me and after that I started listening to modern jazz, then one thing led to another and I started discovering different artists such as Pat Metheny and Bill Evans and before I knew it my transition from rock to jazz was complete.

Which contemporary musicians do you admire?

What is the jazz scene like in the city where you live?

I think the scene in Santiago, Chile is actually pretty good. There are many outstanding local musicians and nowadays we have international players visiting us regularly and taking part in local jam sessions, which is something that didn’t happen a few years ago. Slowly but surely the scene is growing but it’s certainly not like New York City yet.

Talk about your band and what they excel at.

Hard to put into words but all I can say is that I admire all of my bandmates as musicians and therefore I let them do as they please when playing my songs. I trust them and believe in what they are capable of, thus, I want them to be themselves when playing so I suppose they contribute to the band by bringing their own musical experience and knowledge to it.

The band consists of myself on guitar (and composition); Claudio Rubio on tenor sax; Francisco Barahona on bass; and Felix Lecaros on drums.

How have you learned to give each other space for solos, or changing keys?

I don’t really know how that came about but we do it all the time, especially with the bass player, because we go way back and know each other really well both personally and musically. As for the rest of the band, they are all masters of their craft so they eat that stuff for lunch… As for me personally, I reckon I learned a lot during the recording process when I came to realize that there is a time and place for everything, so sometimes you just have to take a step back and let someone else stand in the limelight.

What inspired your new CD “Inminente”?

I tried to apply all of my musical knowledge and everything that I learned during my many years of studying. I wanted to make music out of the endless exercises that I practiced for countless hours and hopefully turn them into melodies or something more than just random notes.

As for the name [“Imminent” in English], all I can say is that it took me more than two years to finally release the album even though it was already finished. The name is related to the feeling you get when you just have to do something and account for it, regardless of the outcome or how you feel about it at the time.

How long was the process to create the CD?

The recording only took 24 hours because it was a live recording session that went down really smoothly, however, it took me two years to finally release the album. It was a strange mix of emotions because I wanted every nuance and every detail to be absolutely perfect. But I got carried away by this sense of perfection and I started overthinking and questioning myself, as well as my playing, until I finally took a leap of faith and decided to release the album.

What were some of the highlights of writing and producing it?

The group of musicians I worked with and the recording studio and its facilities as well as the engineers who helped us during the recording process – everyone did an outstanding job and I have nothing but good things to say about each and every one of them.

What are your top favorite tracks on it?

What did you learn about each other?

Empathy, because I learned to put myself in someone else’s shoes and feel for other musicians, especially when you want them to play what’s in your head. This is something particularly hard and can be frustrating at times because even though the idea might be crystal clear inside your head, it is often quite hard to transmit exactly what you want to someone else in an eloquent manner, let alone for them to understand exactly what you want and to turn that idea into something real.

Where would you most like to get reviews from?

I enjoy reviews from critical minds that know what they are talking about and who can give me good feedback that will allow me to work on my weaknesses and improve as a musician. I would like to mention that Jazz Weekly sent me a review today which I must say was quite a pleasant surprise. Let’s just hope that we get more reviews from pages such as JW in the future.

What are your plans to promote the album?

It’s already online and you can find it in every major social platform. Besides, I’m looking forward to playing festivals in different countries and promoting my music abroad so that it reaches a wide variety of audiences and as many people as possible.

When you call your band “experimental” what are you referring to?

That the band and I like to try new things and push ourselves to the next level. In a nutshell, to go beyond what’s already written and cliché, and raise our game so that we can come up with something new.

Whether that involves different chord progressions or odd time signatures is simply a byproduct of this outlook.

I think of these pieces as “cerebral” and thought-provoking. What do you hope people get from your music?

The idea that I’m trying to push music to new boundaries and like to explore uncharted territory that goes beyond what’s obvious to the ear.

I hope when people listen to my music they will enjoy the journey and feel and think about things in a different way. If they listen and the music takes them somewhere new, then I’ve done my job.

What do you get asked most often by audiences?

People tend to ask me a lot about harmony and more specifically about the process of discovering the harmony behind my songs. I always say that it was a long process and this discovery didn’t happen overnight. It took me years of studying to get to the point that I’m now and, I suppose it always boils down to spending an awful lot of time practicing and trying out different ideas in order to be able to understand and think about music in a more creative way.

How does the guitar allow you to express yourself?

It’s hard to put my finger on it but I suppose I was always keen on music and the guitar simply became my partner in crime in the process of becoming a musician. All I can say is that it was not a conscious decision, the guitar simply beckons to me in a special way that other instruments don’t.

What do you visualize when you’re composing?

I don’t visualize images, for me it has more to do with the way I feel and the emotions that drive me. It’s the feeling I get when playing and the given mind frame in which I find myself at the time that allows me to drift to a wonderful place and lose myself in the music.

Where will you tour this year?

Hopefully Canada and the U.S. Wherever the music takes me, really.

Well don’t get me wrong; I love playing live but if I’m honest, I have to say that what I enjoy the most is jamming with my friends and playing in a more intimate location where I can just let go and play whatever I feel like. I really enjoy playing music just because it’s fun and for the sake of it.

Thanks for having me and for asking me all these questions and especially for listening to my music.