An ear for the political and social drives the band Told Americans. Their spoken word approach conveys the frustrations, laments and struggles of everyday life. Like “Traffic” – you feel precisely as if you are wedged in on the interstate, little brat of a kid kicking the back of your seat, cars suffocatingly surrounding you and inching forward at an excruciating pace. The musicians capture the scene with sonic precision and nerve-jangling accuracy; and two bars into the song, you literally feel the clenching discomfort of a driver who has no way out.

With its cool emphasis on beat three of its 4/4 time, “It Carries On” reflects life’s despair, skillfully complemented by the clarity of guitar with the vocalist-poet reiterating “this has become the rhythm of my life.”

Guitarist Chris Chatzispyrou explains putting to music the stories we live every day and the making of the band’s 2016 CD called “And the Grey Becomes One.” In it, Told Americans gives us food for thought and keeps us nodding in agreement. 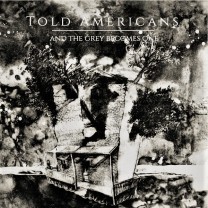 When did you start guitar and why?

I was around 14. I was very impressed by the instrument both sonically and visually. It was the guitar sound of 60s and 70s rock, Pink Floyd, Led Zep and the like that made me pick up the guitar. My first guitar was a Squier Telecaster.

Who are your favorite guitar masters?

That’s evolved over the years. I’ve gone through the Hendrix, Gilmour, Petrucci, Holdsworth, Montgomery, Metheny phases. Pat Metheny is probably my favorite still. I envy his expressiveness and tone.

However, I really have a thing for the saxophone. Although electric guitar is my instrument of choice, I can’t help being very impressed by the sonic qualities of the sax. So Coltrane, Michael Brecker, Coleman and Ayler are right up there with the guitar masters that I think about when I play.

What influences do you have outside of jazz?

I listen to all sorts of music from popular to avant-garde. Everything I’ve listened to throughout my life has influenced me in one way or another. From the choice of moods and sonic hues in my compositional and improvisational style, to the type of production and arrangement techniques, it’s all a medley of responses to everything that comprises my audible library.

One thing that has played an equally important role in my musical approach is the non-musical influence. I believe that music is a way to communicate a meaning and not-meaning in its own right. Irrespective of the artist’s or the audience’s understanding of what the non-musical meaning is per piece or performance, I believe that it is always conveyed with all of its luggage. Social themes are in the center of my approach to music-making and performing.

What does the name of your group refer to?

Kostas, Mike and I have been playing together for a long time now in different projects. Naturally all these years of friendship go with events and stories that in some cases only make sense to the people involved.

It is meaningful to us but not a great story to many people.

Vibrant. There’s some really fantastic music being created and performed in the UK. The level of musicianship is high and the performances are right at your doorstep.

However, the lack in funding and the changes in the music industry do not work in favor of new music coming out. Producing an album, taking time to write music, rehearsing and developing a project, releasing it and even touring are costly processes.

The creators of the projects assume those costs entirely in most cases. There are a lot of fantastic musicians who face the dilemma of putting money and effort into new music or investing their time in pursuing projects that can produce revenue.

Why do you consider yourselves experimental?

Our music is an amalgamation of different styles and forms and it is adjusted according to each track’s statement. The only thing that exists in every tune is the improvisational aspect which draws upon the jazz vocabulary (mainly free and modal) but also rock, minimalism and electro-acoustic music.

We experiment with forms and techniques, and also feel our sound is closer to the avant-garde/experimental sound of Marc Ribot, Fred Frith and Diamanda Galás rather than Coleman and Coltrane.

The spoken word element – is it new each time?

We base the compositional and improvisational narrative for each piece on a story, a social theme or concept. The non-musical theme of each tune is always established; the rest of the parameters are adjusted in every performance as the improvisation develops in each piece.

There are loads of irony and sarcasm injected in some of Mike’s prose, but not comedy per se.

Talk about your band mates.

This is definitely the most important ingredient of the musical outcome. There’s a mutuality and equality in both the composition and performance of the music as well as decision-making that is really unique in this band.

Mike Seal is a fantastic musician with a broad involvement in music making and performing across genres. He has a unique way of approaching bass playing, which is both refreshing and stimulating for the rest of the band. He comes up with lines and riffs that draw from a wide range of influences, from jazz to rock and minimalism as well as punk. His intricate and unique way of writing is kind of a central point, a trademark for the Told Americans. And he is fearless in trying out concepts, forms and sounds.

Kostas Bechlos is not just a very experienced and amazing jazz drummer. His deep knowledge in classical and contemporary art across disciplines and genres acts both as an inspiration for experimentation as well as a guide and a measure for reflection. He has a great ability to make the drums ‘speak’ in sections where there’s no pulse and vary his playing from dense passages to absolutely minimal in order to convey the meaning of his musical statement.

We’d love to tour Norway, Sweden and Finland. We listen to a lot of music coming from there and it feels that our style is relevant to those music scenes. We are of course very interested in touring the U.S. and Canada.

There are lots. However, I think we would all agree on historic venues such as the Village Vanguard.

What question do you get most often from audiences?

“Was that written or improvised?”

What mood are you trying to evoke in your audience?

We structure our music and prose in a way that it communicates a two-fold meaning. The specifics of each theme or story are communicated mainly through the spoken word. The emotional backdrop of that is enhanced or in some cases delivered by music.

Also, we believe sound comes with its cultural references anyway. It is another type of language, so to speak. The music and the prose are also layered. There is a story for every piece, which we hope is communicated effectively.

We hope the themes in our tunes and our overall views on art, politics etc. are reflected in our music. Both the album and the EP project a disgust towards the indifference in regard to today’s shocking events and social themes. We project our view that such events and themes are all integral to the current socioeconomic system.

What is your favorite tonal device or quirk?

I like the use of abstract musical clichés. We do it in most of the tunes, if not all.

When was “And the Grey Becomes One” released?

Nub Music released it on all major electronic platforms in July 2017.

How have your technique and style changed through the years?

This CD is the project that at last reflects who I am. I believe this applies to Mike and Kostas as well. There is freedom and infinite respect and admiration between us, but also years of experience working in bands that makes it possible to contribute our musical and contextual input and we feel it represents who we are.

Your favorite song on this album?

That is impossible to answer. We composed and performed all tracks with equal amount of dedication and conviction, as any band would do. There are of course specific things that I love about each tune such as the way the story was structured lyrically and musically like in “Traffic,” the use of repetition and silence in “Which Side.”

The most memorable performance so far?

The first one at the Troubadour in London is probably the most memorable as it was the first time to present our music and it confirmed the fact that the artist should never try to second-guess the audience.

We were delighted with the audience’s response and excitement with the project, but more than anything with the way that people found abstraction and free improvisation overlaid with spoken word fulfilling and exciting.

We are preparing for our second full album. We are currently writing the material and rehearsing it. It will be even more exciting for us as it will feature artists we respect and look up to from the jazz circuit both in the UK and Greece.

We haven’t as a band but we would love to tour the U.S. Mike and Kostas have previously played in the US.

What single thing would you most want people to know about Told Americans?

I am far more interested in finding out what people’s thoughts are on the music and the project overall. I always enjoy witnessing the variety of reactions to the same thing from different people. It’s very revealing of what you are actually doing instead of what you’re trying to invoke.

Thank you for the interview and for the very interesting questions.

Photos courtesy of and with permission of Christos Chatzispyrou.

2 thoughts on “Getting Into Your Head: Experimental Jazz From Told Americans”