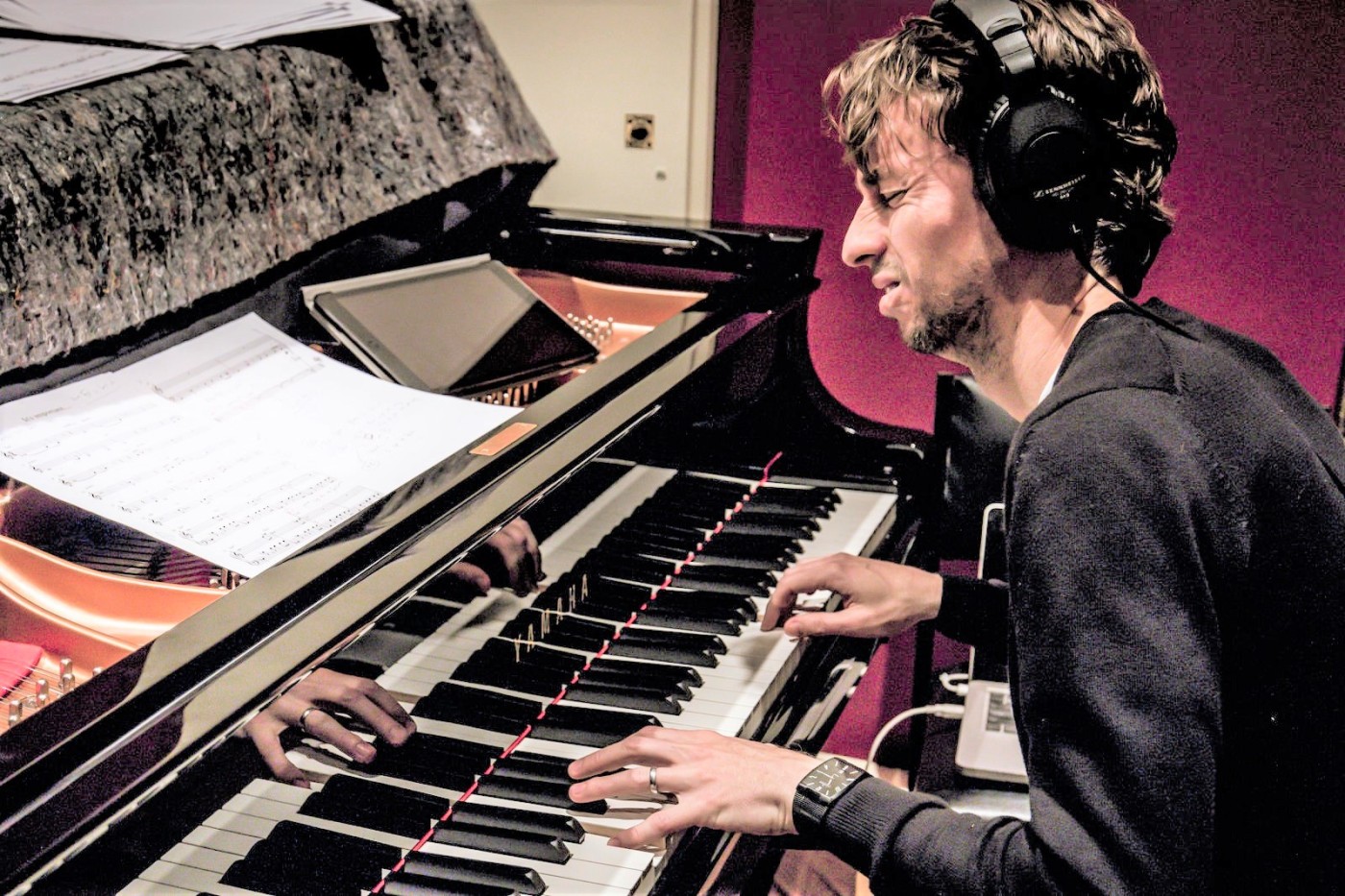 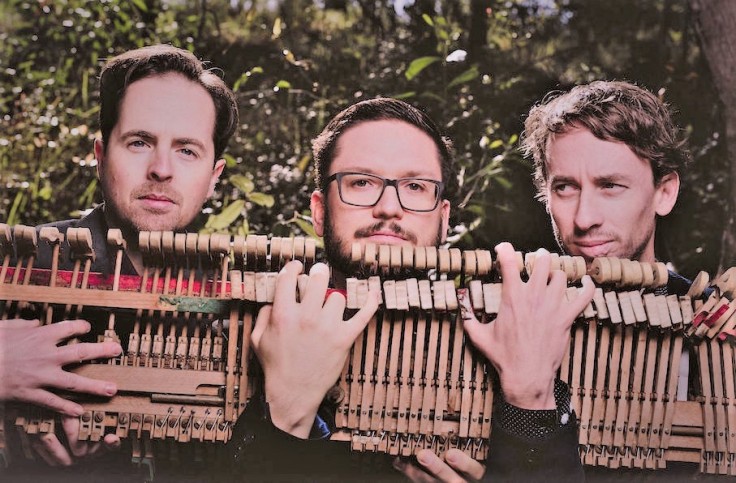 “Trichotomy” is not so much a contemporary Aussie jazz trio as three artist-technicians tied to a musical mission who occupy their own creative spaces. The net result provides groove and harmony – both literal and figurative – and gives plenty of breathing room for experimental solos. Audiences waiting to be surprised will find full satisfaction.

“InBox Zero” (recalling the now-humorous premise of managing one’s ever-growing email) is as puzzling as it is techy; metallic; scraping itself along with backbone support from the bass. When it launches into its melodic middle, it catches the listener off-guard. Quite different a piece is “Strom” – bouncy, jaunty, rich and sweet, with a huge sprinkling of humor (man bites snake, for instance). At one point, the musical three don pith helmets and the accompanying melody cooperates with a sense of journey and adventure. Okay…actually there’s lots of tongue-in-cheek going on here, as seen when these three stooges- make that, jailbirds- vamp in their “Chase” video. Percussion drives this song with a light touch while the bass has his say and alternates with bright sounds from the keys, with Sean Foran on piano.

It’s clear they have as much fun with the music as we do. Trichotomy is rompy and engaging and anything but plain vanilla. Sean explains.

When did you take up piano?

Age 6. My parents put me in classical piano lessons. I don’t think I really wanted to do it or had a particular interest, but they thought it would be good.

What was the “aha” moment that you knew you’d be a musician?

I suppose there were a couple. The first was making the decision to take it more seriously and study music at university. That was a big turning point, as I realized how much there was to learn, and I was quite inspired by the environment, being around the musicians, hearing completely new things.

But even then, I don’t think I really had the clear focus that this was my career. It didn’t come until after I finished my undergraduate degree. I traveled in Europe and heard a lot of music. That’s when I really knew.

Explain your band’s name “Trichotomy” – obviously a trio, but what about the group dynamic?

It signifies the shared balance, the equal nature of the three parts. It’s how we approach making music.

There’s not often a clear theme, but perhaps there’s a feeling that I’m exploring through the music. I’m interested in each piece creating a clear emotion, and I try to use the way the melodies, harmonies and rhythms combine to enable the listener to create his or her own imagery around the music.

What composers are you influenced by?

What rock artists are you influenced by?

What type of sound do you wish to achieve?

Rhythmic complexity meets melodic beauty…I want people to be absorbed by the layering and depth in the music but also to connect with the melodies and follow the structure of the music.

How do you keep your improv fresh?

By thinking about how I can do different things on the instrument for each song. That might be playing techniques, musical concepts, ensemble interactions, structural ideas, and all kinds of approaches to creating varied ideas for improvisation. This is something I practice individually, but also something we work on as a group.

What is the biggest challenge to audience acceptance?

That’s tricky. I suppose you want to create music that people can connect to, and I think you want them to feel the energy that you’ve got happening on stage.

What is the biggest source of joy in being part of the trio?

I absolutely love the varied interaction that you can create with three people and the intimacy of sound in the small group. There are so many opportunities for solo moments mixed with ensemble playing.

What are the essential ingredients for a successful gig?

Thoughtful music, preparation, a venue with a great piano, a listening audience and adventurous musicians.

Well, it’s centered around Brisbane – the capital of the state – so most of the action happens there. It’s always been supportive of the musicians. There are numerous clubs of varied kinds, some jazz clubs, plus festivals, arts centers, events and audience interest. Jazz isn’t a huge part of the music industry in Queensland, but there’s a heap of great musicians, established and emerging, and there’s ALWAYS excellent music on, ranging from local to touring acts.

The Brisbane International Jazz Festival has become a well-established event, putting on local artists alongside high-profile acts like Joshua Redman and Tigran.

How do your compositions differ from straight-ahead?

I think they try to be surprising in how they engage with those musical concepts. So rhythmically there may be a bunch of changing time signatures paired with chord progressions that move into unexpected areas. What I really try to do is create engaging music that pushes away from straight-ahead but still has the accessibility for the audience and the ability for the music to connect with them.

I also try to write in ways that challenge the musicians and allow them to be creative with their parts, making them play different things than what they would usually do in a traditional piece.

What areas do you want to explore more of: modes, chord transitions, complex rhythms?

All of them! But if I had to choose I’d say complex rhythms… such fun!

Ever perform with a vocalist?

Yes! Trichotomy did some shows in Norway at the start of 2017 with the wonderful Norwegian vocalist Elisabeth Nygard Pearson… Liz actually wrote some lyrics to our pieces… I didn’t co-write with her, but she really managed to capture the emotional content of the music within the lyric.

It transformed the piece into something so stunning and different from what we’ve ever heard before.

What was it like to collaborate with the Expressions Dance Company? A fantastic experience. Seeing them create dance to our music really was quite emotional. The physicality of the dance brought a new intensity to the music and captured some of the musical content quite specifically. I learned a lot about being very specific with timing and tempo…it was so crucial for the dancers. The most surprising thing was how well the dancers would know the tracks! We sent them a bunch of recordings to work with and when we played it live they knew all the licks and little highlights in the music. We improvised when we played the show, but needed to not stray too far away as the dancers were listening for some key audible cues.

How would you say “Known-Unknown” explores new territory for you?

Secondly, the process was in two parts. We wrote a chunk of songs, played them live a lot, had them in the bag ready to record. Then we wrote some fresh pieces for the recording… and kept them quite unplayed. It was fun to have two different styles of songs for the band to interact with.

What are some of your favorite tracks on that and why?

Oh that’s quite tricky… Semi-Quasars and Reverie of Lack are both quite fun. They are more freely structured than some of the other tracks, so each performance takes on a new shape.

What is the biggest difference, compositionally, from your debut CD to “Known-Unknown”?

From our debut to now, there’s so much more depth in the writing, and probably a whole lot more variation between tracks.

I think as we’ve grown as a trio (and myself as a writer), we’ve tried to embrace variety in the music, but also learning to find ‘our sound’ and develop what that is.

The writing on KNOWN-UNKNOWN is a big mix between detailed notation and completely free improvisation. It’s bolder than our early work.

So…what is “known,” what is “unknown,” and how do we deal with the space between them?

The known is the written music and the unknown is the improvised moments… the space between them is the real magic and how this interaction unfolds.

That’s the beauty of each musical experience within improvised music; a mix of the known and unknown, for both the musicians and audiences.

How do you give each other the floor for solos and keep inspiring one another?

I think we try to give space for each other, so that the soloist can try things without having another part on top.

To keep inspiring each other I suppose we’re always trying to listen and respond, but also to stimulate creative, new responses from each other.

Favorite venues you have performed?

Where have you always wanted to perform?

We’d love to play some more shows around Europe. We performed in Norway in early 2017 and we’d love to get to Sweden and Denmark.

Any difference in the audiences in Germany, China, Japan and other countries?

Well, as people may know, the Japanese audiences are very respectful…. quiet, polite, but then with loud applause! They are highly knowledgeable about the music too.

China was a little odd… we performed on stage with a MAGICIAN. It was an experience!

I suppose you find little differences everywhere. But I really enjoy talking to people and finding out why they came to the show and what they took away from it.

What is the biggest challenge in being a jazz artist today?

Creating music to contribute something to the wonderful art form that is jazz. So much incredible music has been created, and I think the challenge is to put music out there that continues to push jazz into new areas, stimulating and growing audiences.

What goals do you have for marketing?

To connect with people, and increase the awareness of the variety of sound in contemporary jazz.

Talk about your personnel and their styles.

John Parker – drums. A textural drummer…he thinks in layers, melodies and large forms. Always pushing you to play something different and keeps surprising me with his parts!

Samuel Vincent – bass. Melodic, emotional, a player who is considerate of each note, and listens for the detail, the specifics within the music.

Thanks for a great detailed interview!

Photos courtesy of and with permission of Sean Foran.