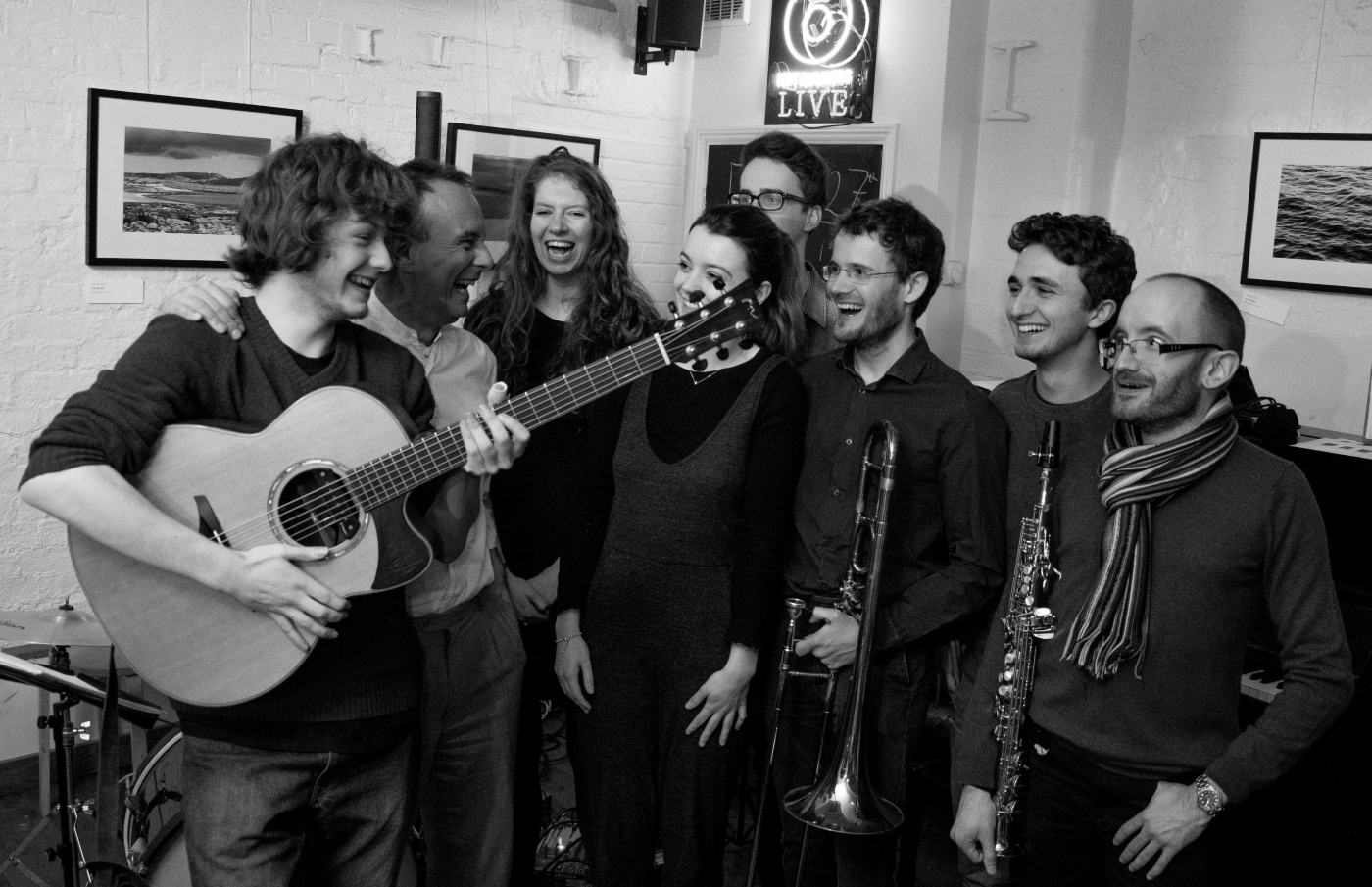 The strong syncopation, simultaneously lending a Latin and classical edge to “Before I Go,” is a perfect entrée to the music of “Better Than TV.” With its many moving parts and sheer energy, the song bubbles up new melodic thoughts all over, adorning the whole like the bejeweled wings of birds in flight.

Even a well-loved staple of the mid-century jazz repertoire, “On Green Dolphin Street”, showcases what this band can do: how they mesh (opener has sax and trombone sweetly in tandem); how they journey apart (keys goes off on his own; percussion invokes cymbals and presses the song forward); until they all bring it back home.

Bass guitarist and self-named elder of the group, Sergio Contrino, gets down with hard-swinging bass lines, adding backbone and lush texture. Contributions of each band member occupy equal space and weight, from the strong bi-lingual vocalists to stellar trombone, gifted sax, tremendous percussion and others.

What instrument do you play?

When did you learn it?

I started with guitar when I was about 10, and bass a few years later. We all want to keep learning and a couple of Betters are still pursuing formal musical training. My long-term goal is to study all of Bach’s cello suites on bass; still a lot to do…

What’s the meaning of the band name “Better Than TV”?

We hope that listening to our music is better than watching television!

Talk about your personnel and what strengths they each bring.

We play in different formations from our trio up to nine people, as you can also hear in the new album. We vary in background, age and musical influences, but share a fearless enthusiasm for playing new pieces.

What kind of songs are in “Songs from No Man’s Island”? Talk about the production and marketing of that CD.

It is a very varied offering, from the melancholy of “Latin Song,” sung in Latin, to the scandi jazz/dance of “Norway” — or from “Da Lontano,” a mix of Dixie and bop, to the funky groove of “Für Louis.” “Gerico” is a rather hypnotic piece, and “Bus Stop Blu” is a fun track sung in my own Italian dialect. Italian is used also in “Before I Go,” a surprisingly complicated song that I really like, while “Hey Joe” is a groovy tune with an unusual structure.

“Standing with Sally” and “Samba per Mi” are vocal versions of tracks already present in our previous album “Late,” and finally “L’attesa e’ Lunga” is a ternary piece with a cello obbligato, played by Rowan.

Recording and production are the labor of love of two real pros, John Ward and Jes Kerr, to whom we are very grateful. I am trying to do a bit of marketing, so thank you for this interview!

Why did you name it “Songs from No Man’s Island”?

To express that we don’t belong to any predefined genre. This gives us a great sense of freedom, and presents its difficulties when trying to promote our music.

Favorite track on that album?

My personal choice is probably “Norway,” with “Before I Go” a very close second. The other Betters seem to prefer “Gerico.”

What inspired you to write the songs on that album?

Not all songs have a clear inspiration, and in most cases they just come out of playing at home. But for example, I remember how “Latin Song” was influenced by the sadness for the suffering in Syria and the death of a friend, or how the lyrics of “Hey Joe” were inspired by a dreadful electoral campaign in the UK last summer.

How is this CD different from your earlier release, “Late”?

We are a completely new set of musicians, apart from myself; with guitar, soprano sax and two voices added to the piano, bass, drum, trombone and trumpet of “Late.” This time only five of the 11 tracks are instrumentals. “Song from No Man’s Land” is also stylistically more diverse than “Late.”

What is your favorite track on “Late”?

Probably “1000 and One,” and the other Betters seem to agree. The recording was actually the first time we played it. I think it shows how good the players are. Special mention goes to David Burgoyne, a great musician who was playing piano with us before moving.

What is FEAB about and what did you want to convey, musically?

The title is simply the song bass line in German notation, where B actually means Bb. I consider it my most successful music composition, for its harmony and a certain mathematical feeling in its structure. For me it conveys melancholy with lyrical moments. I am glad you picked it!

Really good for its size! It benefits from the presence of so many talented musicians, including many students. That makes playing jazz a fresh and stimulating experience. There is also a local jazz scene with a few regular jazz jams and gigs, and a good selection of events at international level, thanks to the proximity to London.

Where have you toured?

Only in the immediate surrounding of Cambridge, but we would really like to play further afield and feel ready for it. So, if anyone reading is interested just get in touch!

What venue in the world would you most like to perform in?

Personally, I would love to play in New York, maybe at the Village Vanguard. I like a lot Moon Hooch and DM Stith, I would love to meet them. In fact the covers of both our albums feature pictures from New York. Other dream venues would be the Barbican and Ronnie Scott’s in London.

What jazz musicians (alive or passed) influence your music?

How would you characterize your style and your sound on the instrument?

I would say I have a practical style of playing, rather disciplined. I like our music to have a very strong rhythm base and I would characterize my sound as defined, or maybe just loud.

Other Betters have mentioned rhythm, harmony or tone as their main focus: you can probably guess what they play!

What inspires you when you write music?

I suppose it is actually searching for something, beauty maybe. What I know is that writing music gives me the same feeling that I have when I listen to something I like.

Do all band members compose?

Ben is a published classical composer, and there are a few other Betters who have started composing, so hopefully we will play their tunes soon!

What are your hopes for the new CD when it is released?

We all think it is good, and it would be nice to see how it is received by other people in different places and from different backgrounds.

But first one has to find a way of reaching a wider public, and this could be tricky with the overwhelming amount of music that is released nowadays.

Are you having any events to launch it?

We’ll certainly have a few gigs in Cambridge next term, and I plan to travel to Jazzahead!, a jazz fair in Bremen, Germany, to do some promotion.

Our first gig after the release will be at Downing College, in Cambridge.

What are your plans to grow your music in 2018?

We are usually busy and we would like to play more. It would be nice to dedicate a full week to playing together, or something similar…and produce a few videos.

Favorite thing about being a jazz musician?

I think it is the freedom when you play. Wonderful. All the Betters agree here.

Thank you for talking to us, we hope to have you at one of our gigs in the future!

And please let us know what you think of our album, two singles are already out:

Photos courtesy of and with permission of Sergio Contrino.