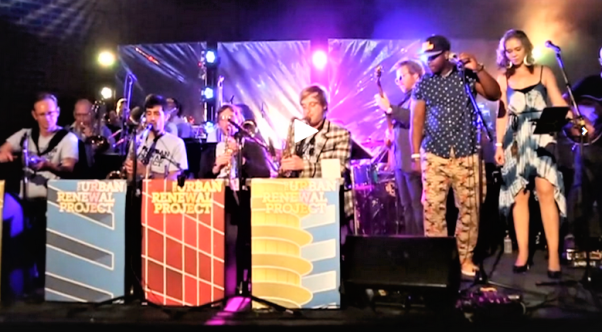 Jazz, rap and big band melted together doesn’t begin to describe it. Add in a torch song or modern love anthem, bright funky horns, staccato-energy rap and sweet melodies. Urban Renewal Project is all that and more.

Taking the best musicians he knows and handing them unbelievable compositions, leader R.W. Enoch of the URP knows the common language here is sonic magic.

Though indescribable, components of different genres are discernible; but here, recombined in a Rube Goldberg-like musical contraption, naming it is not important.

The beats, the tunes, the sheer energy from each individual is dizzying. The sound is bitingly fresh, each song different. You don’t know what to expect, and that’s the point of it all. They will blow you away.

All answers by saxophonist/songwriter/arranger R.W. Enoch

When did you form the band?

I conceived the idea for the group as a student and began putting a band together when I moved to L.A. after college in 2009. I was going to jam sessions around town every week, playing saxophone and meeting as many musicians as I could. After I met enough local players, we started rehearsing and had our first performance in November 2010. Things really got going when a mutual friend introduced me to Elmer Demond in 2011 and he started performing at all our shows immediately.

Do you all perform together all the time?

We perform anywhere from 1 to 10 times per month, depending on the time of year and whether or not we’re touring.

Talk about your personnel.

The level of talent and musicianship embodied in all of our members has made it very easy for us to come together and make music. Elmer Demond is an experienced, virtuoso freestyler, so he can rap himself in and out of literally any situation we put him in.

Our horn and rhythm players and our regular singer Alex Nester are all veterans of the L.A. scene and can usually pick up a new song on the first try. That said, we rehearse regularly and are constantly pushing ourselves to make our performances as engaging as possible.

How would you characterize the music?

Brass, bars and beats. It’s an upbeat mix of soul, hip-hop and jazz, featuring a singer and a rapper with a big band horn section.

How did you come up with this concoction of genres?

I grew up as a voracious consumer of pop-culture and a student of jazz while learning to play the saxophone. In high school, I started to feel that the common links and shared history between various styles of music weren’t being thoroughly explored, and I wanted to see what kind of music I might find if I explored between the cracks of different genres.

What was the “aha!” moment when you defined yourselves as a band?

We’re constantly redefining ourselves and reevaluating what we think we can accomplish as a group. There was a big New Year’s Eve party we performed a couple of years ago with a few hundred people in attendance. It was the first time we had played for a group that large, and we were a little surprised at how much everyone seemed to be enjoying our performance.

Earlier this year we had a similar experience, except this time it was at a large festival in Ohio for 1000 people.

What was the original reaction when you started performing?

Listeners of all ages seem to enjoy our live performances, but haven’t always been sure what to make of the band itself. We get a lot of comments like, “I don’t like rap, but you guys are great” or, “I don’t listen to jazz, but this was really good.” Sometimes people have a hard time opening up their ears to a new artist if they can’t place them squarely in one genre.

Who writes the original music and who writes lyrics?

I write almost all of the music the band plays, and I work on the topics and lyrics with Elmer Demond, Alex Nester and any other guest artists we may be working with on a particular song or recording.

We recently added “American Boy” (originally by Estelle featuring Kanye West) to our rotation, and we’re loving it.

Where is the band based?

We’re based in L.A.  We’re originally from all over the place, but we all live somewhere in the sprawl of Greater Los Angeles now.

Your favorite venue so far?

Our favorite local L.A spot is probably The Edison. They were an early fan of ours and have treated us really great in the years since. Plus, it’s gorgeous inside.

Where would you like to play that you have not yet?

A big outdoor music festival. We’ve done a handful of great indoor ones so far, but we’re still waiting for that giant outdoor stage.

What was your first album and when was it released?

Our first full-length album was “Go Big or Go Home,” and that came out in the fall of 2012.

What’s the inspiration behind the CD “21st Century Ghost”?

“21st Century Ghost” is a commentary on humanity’s hyper-connected existence today. People check their e-mail every day, but may not speak to another person for several days at a time. We drift aimlessly through traffic and crowds, looking more at our phones than the world around us, and we curate online profiles that barely resemble our true selves and will outlive every one of us on the internet. All of the songs on the album touch on these subjects in one way or another.

What’s your favorite track and why?

I’m partial to “Don’t Ask Y.” It’s simple. It’s catchy. And Camp Lo knocked this feature out of the park.

Themes that seem real to me, and hopefully other people. Topics that may shed an interesting light on some aspect of the human condition and haven’t yet been overdone in the pantheon of Great American songwriting.

How did you come to the attention of Resonance Records?

A mutual friend introduced me to Zev Feldman, Executive VP and General Manager of the label, back in 2010. We became friends over subsequent interactions and he began to follow the success of the band over the last few years. Lately we’ve been playing larger shows and hitting some of the major jazz festivals, and I think he thought we were ready to take the next step with a label like Resonance. They started a new imprint, Fastrac Records, for our album “21st Century Ghost” and hope to feature more young and emerging talent on that label in the future.

What big bands inspired you?

I am a big fan of nearly all big band music. A now-defunct local band where I grew up in Virginia called The Devil’s Workshop Big Band was very influential stylistically, as they were combining some unusual things like reggae, funk and hip-hop back in 2002. Roy Hargrove’s RH Factor came out around the same time and was an early influence on me as well. There were some ’70s bands I really like that got into the pop-fusion sound: Jaco Pastorius’ Word of Mouth, Dr. Buzzard’s Original Savannah Band, Billy Brooks (Windows of the Mind) and Australia’s Daly-Wilson Big Band.

We’ve got a few local shows coming up soon at the Federal Underground in Long Beach and the Torrance Cultural Arts Center, but our big focus for next year is touring and stopping through South by Southwest in Austin, TX.

Do you rehearse together or virtually?

We rehearse once or twice a month, depending on our schedule. Always the full band and always in-person. As you can imagine, it’s too difficult to do it more often than that.

You all exude joy, as seen in your videos. Do you all feel like you’ve found “home” with URP; that this is the place for all of you to be together?

Thank you! That’s not a comment I’ve heard often. I think we all enjoy spending time together and believe in the shared vision that is The Urban Renewal Project. Touring and performing can be really emotionally taxing due to the long hours and strenuous itinerary, but we’ve never had any interpersonal problems between the 15 of us, which I think says a lot about how well we get along and how much we respect each other as people and artists.

We like to think there is at least one song that everyone can get into on “21st Century Ghost.” The “something for everyone” appeal of the record isn’t something I’ve seen mentioned in a lot of reviews.

There’s a lot of hip-hop and rapping, but also songs without that. There’s a disco-pop jam, a couple of R&B/neo-soul songs, and a few selections with a more jazz-oriented, cinematic flavor. I hope that everyone can check it out, find something they really like and become a fan.