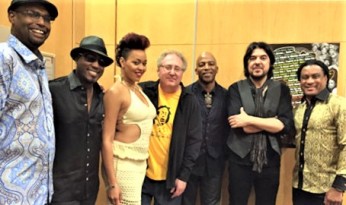 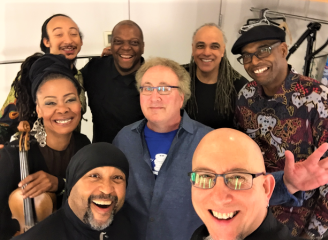 He was an exec producer for Grover Washington, Jr., arranged a tribute album of Marvin Gaye, and worked closely with another Miles (the “Kind of Blue” one).

Jason Miles’ reach is far and deep, with a daringly diverse catalog that would be impossible for most to achieve. A leader, sideman and project impresario, his attitude on jazz is exploratory and open-minded, and his own style is funky and free.

When did you realize you wanted to choose a path in music?

I played music all through high school (professionally) and started to feel like this could work for me, but when I got into college and heard “Bitches Brew” in 1970, I knew this is what I wanted to do. It was exciting and dangerous.

Then came listening to Chick Corea and Weather Report and Monk and Bill Evans.

What did your early training consist of?

Mostly private studies on the accordion at seven and then on piano at 10.

How did you get your start in music?

I played in a band in high school and we ended up working pretty steadily for four years in the Catskill Mountain hotels and various parties in the 1960’s.

What instruments do you play?

Do you consider keys your primary instrument?

What would you consider your first real break in the industry?

In NYC I got to play with a very popular band in 1979, The Rising Sun band. We were unique because we had two keyboard players and also bad-ass players like Bob Mintzer, Gerry Niewood, etc.

What themes inspire you when you are composing or playing?

That’s a good question. I am always inspired by great talent. When I work with great talent the themes and direction reveal themselves and I go from there.

Sometimes, however, it just takes hearing a note the right way and then BOOM. It all comes together.

The most substantial change you have seen in the industry throughout your career with the exception of technology?

I have seen how young people approach music and it is very different from the approach I was taught and what I learned from my mentors and teachers.

I always started with the beginnings of a melody. Now it seems like the melody is on the back burner, as far as the industry goes.

The biggest overall change? Easy. Way less money available and harder to have your music listened to.

Your bio talks about a restless, genre-fluid musician. How has this served you during your career?

I embraced them and it got me to the place I’m at today.

I build music from my own paradigm. If I’m producing an artist we can compare music but we need to create a space of originality, and having the knowledge of many different genres helps that quest.

Amazing that you interacted with Miles Davis on the guitar’s role in jazz. What was the biggest takeaway from working with him?

What I learned from Miles was don’t repeat yourself. Always be original and never look back.

Listen to all kinds of music and understand your place in the world and life.

What draws you to world music, and is it changing the way we categorize jazz?

I love the rhythms and melodies from all over the world. I love the grooves from different countries, but the reality is in the U.S. we don’t embrace it as much as other countries do.

I once said to a famous producer friend from Brazil about 28 years ago, “Isn’t it great that more people are getting into Brazilian music?” He said, “Yes. Now we sell 7,000 albums instead of 5,000.” He’s right; the appreciation is minor in the scheme of things.

Most memorable performance or two?

One was performing “A Love Affair: The Music of Ivan Lins” at Carnegie Hall with Ivan and many folks from the album. Another was “To Grover with Love” at The Hollywood Bowl. Even George Benson noticed that this music needs to be reintroduced to the public to show them where contemporary jazz came from.

Performing that in Tokyo with Ralph MacDonald in the band was also very memorable. Recently I performed “Celebrating the Music of Weather Report” at The Clearwater Jazz Holiday with a killer band and we blew the place away. Totally memorable and my 90-year-old mother was there.

Favorite venue and why?

Hollywood Bowl for a big venue. Mind-blowing when the stage spins and you see 17,000 people out there.

For a smaller venue, The Blue Note is special, and the Blue Note Tokyo is really happening.

Talk about your personnel and the strengths they bring.

I only work with the best musicians. They bring the inspiration and vibe so I can be the best I can be and my saying also is “The way of the band is the way of the drummer.”

He was my hero and mentor, and a true genius. I came to NYC to try to work with him and after 12 years I did. A dream come true. I honor him and my other musical friends and heroes everyday: Miles, Coltrane…they should have national holidays for them.

What was it like to work with Andy Snitzer?

The quintessential NYC sax player! He brings that vibe to his playing influenced by John Coltrane and Michael Brecker.

In 1994 I needed a horn player for a solo and Michael Brecker was on the road. He called me and recommended Andy. That was good enough for me.

What was the attraction to go into production?

It’s the mentality of how you view the music. When I was making albums doing synth programming/keyboards for 15 years, I always had the drive to help artists and develop projects.

When you’re in the studio for years with Marcus Miller, Tommy LiPuma, Luther Vandross, Russ Titelman and other great producers you learn the craft. And make no mistake, it is a highly skilled craft to be a great producer. I learned and developed that craft to move to the next place. Which was very hard, by the way.

What is the most common request by artists when you are helping produce their music?

To make the music successful so it elevates their careers. To make the best quality music we can make.

How does the fans’ appreciation of jazz differ from, say, the U.S. to Japan?

The U.S. is in a very strange place right now and this is a complicated answer so it almost requires a whole column.

I will just say that jazz fans around the world have a much deeper knowledge of the music than we attempt to have here. They still care about album credits in Japan. In Europe, the audience is much more open to the diversity in music.

Can jazz bridge a gap in political ideologies?

In our present situation I don’t believe so. The audience doesn’t have the attention span to absorb any kind of spiritual message of the music.

Everybody everywhere in 2017-18 should be required to sit down and listen to “Kind of Blue” and “A Love Supreme.” Then we would see how many are open to accept the musical and spiritual vision that Coltrane had, to tie it all together

What are your plans to tour or write more for the rest of 2017?

Touring is a very difficult word these days. How many bands and artists can go on the road in the U.S. especially for a few weeks and bring back money? The audience in the U.S. is not available anymore for many artists.

There will always be the big headliners who can tour because they have built their audience. It is a lot harder and not as romantic as it sounds.

I’ll be touring Europe in 2018 with my “Kind of New” project and we are currently submitting the CD “Celebrating the Music of Weather Report” to festivals. It’s the perfect show for that scenario.

As far as writing, I spent the last 1 1/2 years writing and making a new album for my Global Noize group. That’s done now and looking for the right situation.

Outside of that, and until the dynamic for publishing songs changes so we can actually make money again, I won’t be writing new music for a minute.

How do you want to develop yourself in 2018?

One thing I want to do is get back into acoustic piano which I play all the time, but to really dedicate myself to understanding how the masters got to where they are. It takes time and dedication and I have spent a lot of time producing, writing, and performing. So it’s time to add something else.

What did it feel like to win your first Grammy?

It was an eight-year journey to get “A Love Affair: The Music of Ivan Lins” such recognition. It was worth it at that moment.

Why isn’t jazz made more available to the public’s ears – is jazz snubbed and why?

What is jazz now? I don’t have the answer because the factions are so fractured. Is it straight-ahead, fusion, world, smooth?

Jazz in the U.S. has even turned corporate and the lane is not wide for acceptance. There are bands now like Snarky Puppy and Kamasi Washington who are getting the young folks out. We’ll see how it builds.

Jazz is now built more on education than getting a good education from the scene which I was fortunate to absorb and be a part of. There really is no jazz scene in NYC anymore…at least not like it was.

I live 50 miles north of NYC and the jazz scene is minuscule but there is some life.

Something new and different you’ve always wanted to write?

Yes, a book on my journey. Music-wise, I’m always searching.

What besides music has your career brought you?

A sense that I achieved things that a very tiny portion of the population has been able to achieve. It has also brought a sense of belief that if you keep on working hard you can achieve your goals in life.

There is no timetable and the universe does not care if you are in a hurry. It took me 12 years to get to work with Miles Davis. When it happened, though, those 12 years melted into that moment.

Working on live shows, finding a home for the new Global Noize album. The Unity Funk project. Continuing to work with Rebecca Angel to help build her music and career, put together the four other albums I have in the car. And the most important project, working on staying healthy and happy and also to continue writing my book.