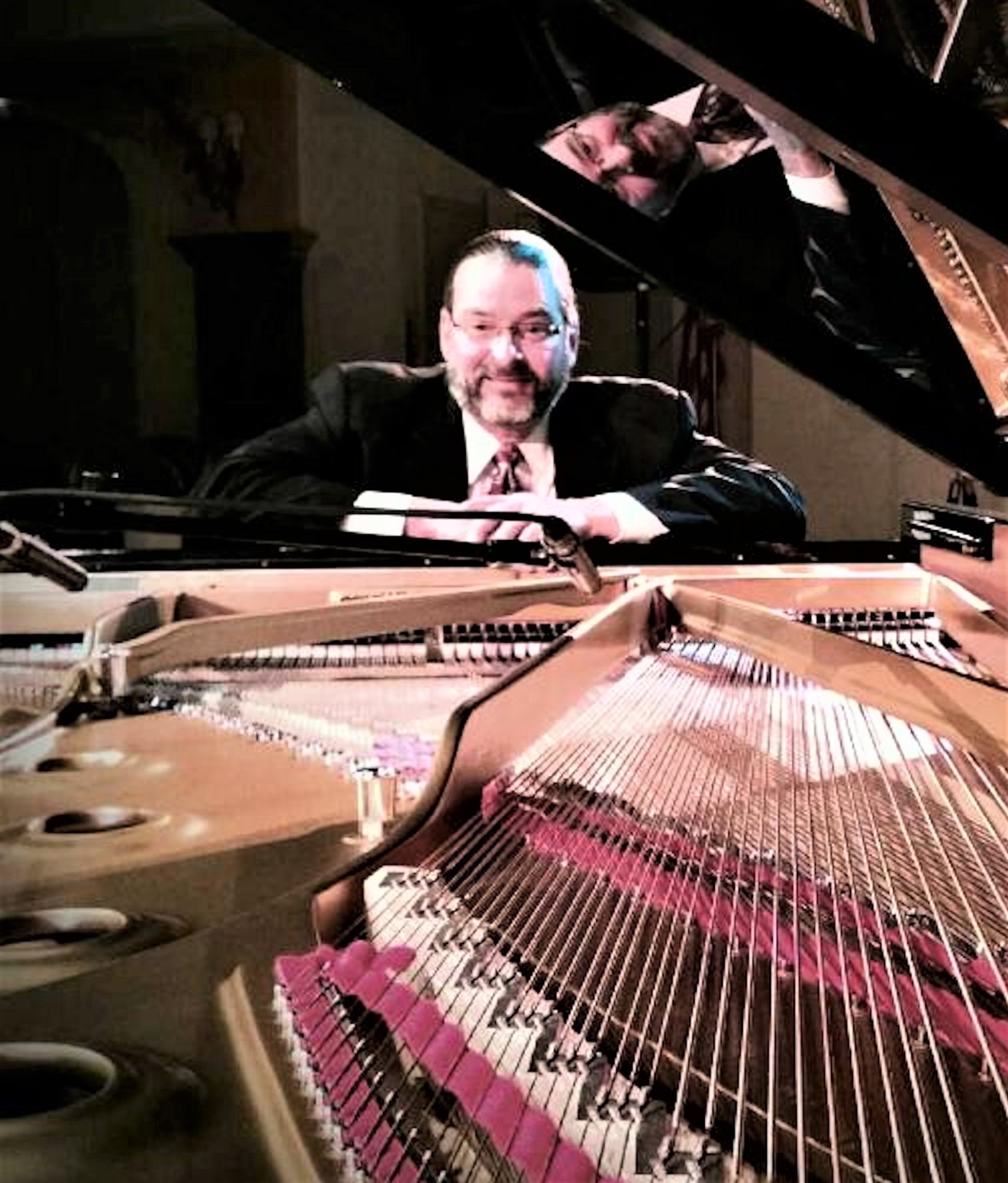 He started off tickling the ivories of the Hammond B-3 and now leads the decades-established self-named Trio as an accomplished pianist. The head bop, the grin: the man is present. His sound varies from a full-throttle, rollicking attack on “Lullaby of Birdland” to a lyrical delicacy on “Dolphin Dance.”

I started training on both organ and tuba at age eight.  My father had me study with instructors who not only taught you how to play the instrument, but taught you from a theory perspective. As a result, I learned theory from a hands-on perspective.

The second part of my early training was the opportunity to perform alongside my father on both instruments in community and professional groups. I had the great fortune to perform with musicians who had performed in Sousa’s Band, with Harry James, Mel Torme, and the list goes on and on. Needless to say, I am a true believer in hands-on training from the earliest possible moment in a young person’s education.

What prompted you to write a instructional book on left hand voicings?

As a result of my collegiate and private teaching, I noticed that most piano players were having trouble playing lead sheets or big band music that only had chords and slashes. If I asked a student to play a G13 chord, they would give me all kinds of answers rather than just simply playing the chord. Most had no stock chord voicing to fall back on.  Moreover, as more advanced students started coming to me for improvisation lessons, the one thing that seemed to be holding up their improvisation in the right hand was what chord and where to play it, with the left hand.

When I started teaching at Shepherd College, I put together a text that I used with my students which Warner Bros. Publications picked up and we turned it into the self-teaching text that is now The Jazz Pianist: Left Hand Voicings and Chord Theory.

Why did you gravitate to the piano?

When I went into the Army Band’s program right from high school, I started playing more piano, but horn bands with a Hammond B-3 were still very popular, so I still stayed mainly on organ.

In 1981, I was stationed with the 8th Army Band in Seoul, Korea and there were no organs, except in a few recording studios. I was playing in clubs seven nights a week on piano and by the time I came back to the United States, the organ had lost its popularity and I stayed on piano.

How did you find the community band experience?

I played in the New Holland and Bainbridge Bands starting at about age 10.  I had been around both groups from my earliest recollections as my father was in both groups.  Both were very active with weekly rehearsals throughout the year, a spring concert in March, and numerous parades and outdoor concerts beginning on Memorial Day and continuing until Labor Day. So I was around band music all the time.

Playing alongside musicians who were in Sousa’s Band or had been in military bands during WWII or having active duty members of the elite Washington, DC military bands perform with us was an invaluable experience, especially at such an early age. These musicians were so selfless in their mentoring of the young members of the group.  I truly believe that I am the musician that I am because of those wonderful experiences.

When did the band form?

The Fred Hughes Trio started in 1989 with a month’s worth of performances at Twins Jazz Club in Washington, DC. We soon became the rhythm section for several other groups in the DC area, as well as continuing to perform as a trio including residencies at several DC clubs.

It’s changed from the days when I first came on the scene.  Blues Alley has changed its offerings and dealings with “local” musicians.  The infamous One Step Down is no more.  The “hang” and sessions just aren’t what they were.

However, there are still numerous opportunities for musicians, especially the up-and-coming musicians, to perform. Unfortunately, the mentoring that was such a big part of the scene when I came to town is just not available. One Step Down, in particular, offered such an invaluable opportunity for all musicians and we have yet to resurrect that experience in the current scene.

Outside of your hometown, where do you most enjoy playing?

2001 in Deagu, Korea. The Trio was on tour and most of the performances were in Seoul.  In the middle of the tour, we traveled to Deagu. When we arrived at the club, there was already a line around the corner waiting for the show. Everyone wanted to help us get into the club. The sound check might as well have been a concert. The first show’s audience, which was beyond standing room only, consisted of half adults and half school-aged children all decked out in their school uniforms.  Most of the students were at the back of the club. When we started into one of our tunes with more of a back-beat groove, I looked up from the piano to see the entire back of the club waving their lit cell phones back and forth in time to the music.

What is the most-often asked questions in jazz workshops?

What was that chord you just played?

Talk about producing the album “Matrix.”

Since we recorded in my home studio, the sound is all-consuming. I have a great piano and a fantastic technician who keeps it in excellent condition. The piano, the bass and drums sound as natural as possible, while keeping Amy and Frank as comfortable as possible with the recording process. It is a very challenging, yet rewarding experience.  We go through many variations of the mix until we all are satisfied with the project.

What is your favorite track on it and why?

Whichever I am listening to at the time.

Each one of the songs was picked for a reason and they are all equally enjoyed, practiced, etc.

What do you visualize when you’re composing?

Composing comes from so many different angles. Sometimes it is something I’m practicing that leads to a song. Sometimes it’s a harmonic progression that starts the process. Other times it is a melody. Only a handful of songs in my catalog have actually come from an overall feeling, visualization or experience.

How were you inspired to riff off a piece like “Andante Cantabile”?

That opening duet of the French horn and clarinet from Tchaikovsky’s 2nd movement of his Symphony No. 5 is so beautiful that I wanted to play it with the Trio.

His writing was so masterful that I almost feel like we should leave it in the setting for which he intended, but I hope hearing the melody in the context of the Trio and, in particular Amy’s beautiful solo, does the melody justice in this setting.

Talk about your personnel (Amy and Frank) and their strengths; and how do you accomplish that joyous sound among the three of you?

Frank has been with the Trio since the mid-nineties and we have great chemistry from working together for such a long time.

Amy and Frank had been working together in different settings since 2003 and when she joined the Trio in 2013, it all just fell together so easily.

We love what we do. We love doing it together and it’s so rewarding to hear people say that is comes through in our recordings. Seeing us live, you can see the joy, but to hear and feel that through a recording, we must be doing something right.

Why isn’t jazz more prevalent in everyday life – has it been snubbed?

I don’t know that I would say snubbed, but we do need to work on its “brand,” to use a current term.

The reason I say that is . . . I don’t know how often we are asked, “what type of music would you call what you’re playing?”  When I respond with the word jazz, the response is, “I don’t like jazz, but I really like what you’re playing.”

Seems that our “brand” may have some image issues.

What is the most exciting thing you have observed about jazz music today?

I think one of the most exciting things for the genre is how we tap into the internet. When you hear the kind of numbers that streaming sites like Smalls and Jazz at Lincoln Center are drawing, that is extremely encouraging!

How has the industry changed since you started your career?

Other than the obvious, communication and music distribution, the types of gigs are constantly changing. A steady monthly regimen of club dates is being replaced by smaller concert settings.

Plans for your trio for the remainder of 2017?

We have the 2nd year of our annual “I’ll Be Home for Christmas Tour” coming up with performances in Pennsylvania, Maryland, Delaware and Florida.  We will be recording the concert on December 2nd at the Blue Bamboo Center for the Arts in Winter Park, Florida, which will be the beginning of a new CD project.

Thanks for all that you are doing for this art form, Debbie!  It really does take a community!