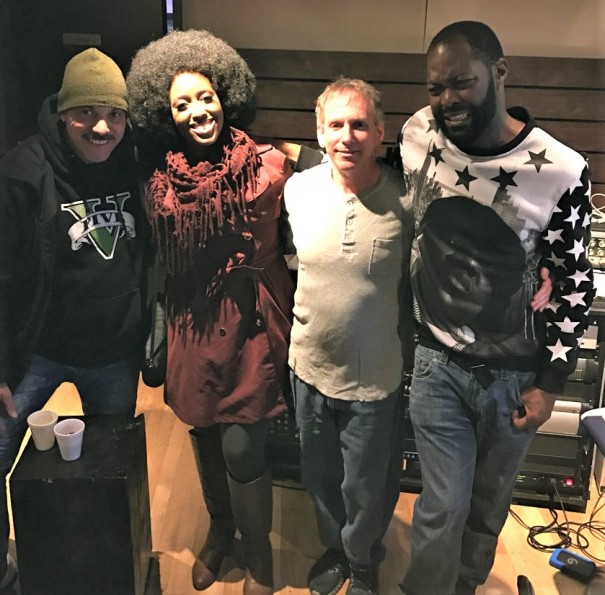 The next thing in the marriage of funk and jazz is coming via Detroit.

With a rich and well-storied musical legacy, Detroit has one of its original Motown recording studios still in operation. A class trip to Detroit inspired David Schwartz, a multi-talented, multi-visioned Brazilian drummer, to do something almost impossible, combining, mixing, heating up and serving a brand new groove in jazz.

Bringing together funk, jazz and soul, he launched Detroit Rising, bringing talent from different corners of the U.S. together for this next-gen sound.

How did you come up with the idea for “Detroit Rising”?

First, I’ve had many chance encounters with the band known as Parliament Funkadelic.

Second, I was attending Dubspot, the electronic music and audio engineering night school in NY. My final project was going to be an album and release of live music and electronic remixes.

I was experimenting with mixing funk, R&B, jazz and soul in combination with electronic dance-oriented music. A class trip to Detroit for the Movement Techno/House Music Festival gave me the inspiration to seek out the source of Motown.

I met with the owners of United Sound Studios and was amazed at the talent that has been produced in this legendary Detroit studio. A plan was forming. I wanted to work with the best musicians –  experienced R&B, soul and jazz legends. I began talking to many famous bands and their managers across the U.S.

A chance encounter backstage at a P-Funk concert in NY led to several connections with the band. We shared a similar vision for expanding the boundaries of funk ‘n’ jazz. I like to call this Future Jazz. First recordings involved live jamming and writing songs on the fly at United Sound Detroit.

What is your role as creative director?

The project is very organic and everyone works together as a team. There are a good 50 people working on this project. It’s a labor of love.  I created the original idea and structure but let the artists come up with songs, variations to themes, lyric writing, etc. I get my hands dirty in all aspects of creating a music project, from setting up recording sessions, co-writing songs, working with mix and mastering engineers, fixing musical creative issues, contract negotiations, artwork, vinyl manufacturing, record distribution, marketing, PR, sales, etc.

What events are planned for the release in April of 2018?

Our team is working on a lot of launch projects starting this January with the digital release of singles leading up to the album in April. Many DJ’s and record stores are planning events in the US and worldwide, and we have a team of funk DJ’s in many countries setting up funk days, a ton of social media, music videos, special artist signings, t-shirts and giveaway promotions. We’ll be promoting all summer long at music festivals and in far-off electronic music locations including Ibiza, Spain. Both live musicians’ gigs and electronic DJ events are in the works.

How do you feel it honors Motown?

The original project started in Motown country – Detroit. Many of the musicians have a strong tie to Detroit. The Motown recording studios and their musical family history goes back to the original Motown and Stax recording artists. Many of the songs are based on legends like James Brown, Stevie Wonder, etc. The musicians wanted to bring their ideas of R&B, soul and Motown to this project and then advance it into the future.

Detroit is rising. Detroit used to be the music and car capital of the world. Many of the world’s best artists and scientists started here. This was the home to cutting-edge science, building and engineering, incredible music talent, etc. Almost a futuristic utopian society much like our current internet is today.

Detroit has an incredible talent pool and is incredibly resilient. In just the last 2 years I have seen amazing turnarounds occurring in the city. A recent form of electronic music, Techno, which was invented in this city during a difficult period, has now been transformed into a worldwide phenomenon and is spreading throughout the world.

And yes, there are many jazzy elements to this electronic music. Through all of my recent trips to this fabulous city, I have fallen in love with the art, the buildings, the music, the singing, cool cars, amazing graffiti, electronic sounds and the warm-hearted people who eagerly share their stories of what was and where they envision the city can go next.

What’s the inspiration behind the “cosmic” aspect of the CD?

P-Funk is cosmic in all of their adventures and music endeavors. But the name came after listening to the final tracks. There is a spiritual cosmic essence to this album that is hard to describe.

How did you select the various artists who are working on this project?

A lot of the musicians came on board through divine intervention and a lot of networking. Sounds corny but true.

From the very first recording at United Sound, musicians just showed up on a last minute’s notice. Incredible world-class musicians who just happened to be in town that day.

Backstage encounters at concerts led to more musicians. For example, at a big recording session in Hollywood, Steve Boyd, the super-talented singer from Parliament, happened to be the roommate of the recording engineer that day. He was just visiting the studio on a short break from P-Funk touring.

We needed more vocalists and soon he was drafting a song on the spot. We needed a killer female vocalist to accompany him. He suggested Sue Ann Crawford of Prince fame who was living and working in Las Vegas. We flew her in the next day.

Another adventure was a big recording session in New York happened on Halloween eve right after a big P-Funk concert at BB King’s in Manhattan. I was chatting with the band and realized all the talent I needed was together in New York just for the day! We came up with a plan to keep them in New York for one more day.

I worked through the night waking up friends who owned music studios and equipment companies. We needed to record live the very next morning and had to have all the plans in place by 10 a.m. This turned out to be an amazing creative session for all of us. All of the months of touring from city to city culminated in this live recording session.

What do you hope audiences take away from this?

This album is a live creative project by fabulous musicians who tour over 200 days a year. This was their chance to stop for a minute, shine and create something new. Each musician gets a chance to be featured. Part funk, jazz, soul, rock-n-roll. Plus, the songs are structured to be remixed by electronic dance DJs. Each album or CD includes additional download tracks, instrumentals and dance remixes.

Will this be performed live anywhere?

Yes. We are working on music videos which are performed and filmed live in Detroit. The album is actually made up of several P-Funk bands. We are working on showcase tours both here in the U.S., the U.K. and Europe for next summer. Stay tuned to downjazz.com for more information.

What were the challenges in gathering the different artists and DJs?

Like herding cats. Trying to get world-touring musicians together for a day is incredibly challenging. My recording team goes where they go. Have a few hours in Seattle? We will be there. Famous DJ’s are also incredibly busy. To get them to finish a remix or recording can often take six months or more.

What instrument do you play?

My background includes being a professional Brazilian drummer for over 20 years, with over 1000 live shows: Carnegie Hall, Lincoln Center, VHI, MTV, Globo, Univsion, etc. I’ve performed with bands that have played with Gogol Bordello, Wyclef Jean, Pharrel and the Neptunes, Paul Winter, many more.

I also recently took up the piano and am currently studying electronic music composition and audio engineering. In music, you never stop learning!

What was the biggest surprise in producing this?

How much work each step of the process takes. You need a lot of perseverance and patience. This is a part-time labor of love project yet I have logged over 1500 hours of work. It became a second job. Quality is my number one goal, so the extra time and effort is worth it.

Is vinyl continuing to make a comeback?

Yes! Young people all over the world are buying turntables and digging for the great hits of yesterday. Record Store Day is now a huge event!

There is something magical in holding and playing a full vinyl representation of a musical work. I think it even sounds better and richer. You can showcase cool graphics. But boy is it a pain to manufacture.

What is your music and production background?

Since you recorded in several cities, do you find these to be the strongest jazz hubs?

N.Y., Hollywood and Detroit are jazz hubs. But so is tiny Baltimore where one of our great drummers Benzel lives. Europe, the U.K. and Japan are also big jazz hangouts.

Do you feel jazz has been snubbed – why is it not more mainstream?

Complicated question. Jazz was the rock ‘n’ roll of its day. Today’s pop music has elements of jazz and even classical. Tastes and cultures are ever-changing. Pop music today tends to be very simple and formulaic to appeal to the average person who wants to easily understand the song and possibly sing along.

Jazz can be more complicated and takes time to understand. However, it is making a comeback in new forms such as electronic music. Live musicianship is also making a comeback and even rock ‘n’ rock is linked very closely to jazz. Many of the world-class musicians are jazz-trained and bring that training to their recording sessions and to their live gigs no matter what the genre.

Do you feel jazz sub-genres are blurring into each other, or would you say jazz is evolving?

Jazz is always evolving and returning to its past and then evolving forward once again. That’s what makes it jazz.

Ask Miles Davis on this one.

Talk about the album cover design.

This took a long time to find the right artist.  Anna Dittman is an incredible artist in the U.K. The theme for the album art is a cosmic universe under water. These advanced sea creatures live on another planet or perhaps are from the lost city of Atlantis? Maybe Detroit is related to the lost city of Atlantis? The cover represents one of the undersea goddesses from the city: part human, part octopus.

Danny Bedrosian, the current piano/moog and synthesizer player for Parliament Funkadelic, wrote several underwater-themed mermaid songs for the album. Artwork flowed from this.

Graphic artist Bizhan Khodabandeh is an accomplished designer and professor. We met at a comic book art fair. We worked together on the underwater theme about a funk sub exploring the cosmic depths and discovering this incredible universe of people and music.

What other CDs have you worked on?

I’ve worked on many smaller Brazilian and electronic music projects, but this is my first big funk project. I guess you would call me a Funkateer.

Do you have a new project in mind?

I do have some exciting ideas for new projects. For example, the amazing funk bass player Bootsy Collins recently landed in my backyard one afternoon in my small town of Queens N.Y. But that’s a story for another adventure. 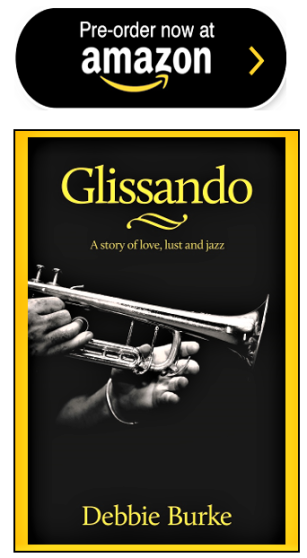