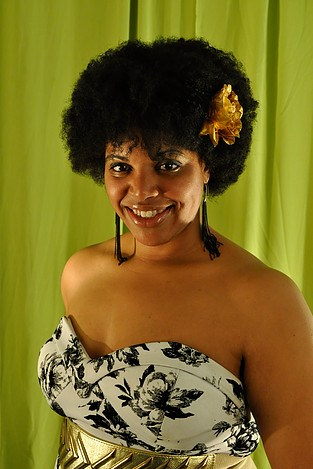 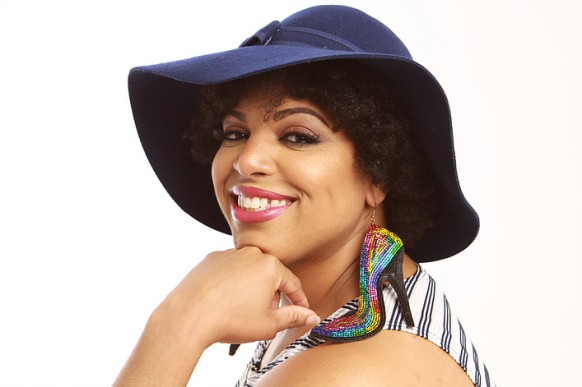 Singer/songwriter Stephanie Jeannot hosts a jazz radio show called The JNote at Medgar Evers College in New York City. Her recent Sunday broadcast on WNYE 91.5 FM – always relevant – was a celebration of the life of Dizzy Gillespie who would have made 100 this year. A powerhouse of a singer who belts it out with love and passion, Stephanie’s voice is silky sweet, yet can skillfully maneuver through twists and trills with purpose. She’s also a poet, having just published “Pulchritudinous: The Poetry Collection.”

One of Stephanie’s many areas of interest is jazz and race. Her thesis examined this topic in-depth and helped her gain a stronger historical perspective of the art form.

Why did you choose a musical path?

I have always loved music. It is my first love and has never left my spirit. I have been in every choir you could think of since I was in the first grade.

I’ve written a wealth of songs, have two published albums and just completed my first book of poems!

You read 200 books on music for your degree. Chore or pleasure?

I love to read. My father told me he doesn’t know anyone who reads more than me. It was a pleasure.

The books were mostly historical and biographical. My favorites were Blues People by Leroi Jones, What is This Thing Called Jazz: Insights and Opinions From The Players by Batt Johnson, The Culture of Jazz by Frank A. Salamone, and Miles The Autobiography by Miles Davis, just to name a few.

At the 100th anniversary of Dizzy Gillespie’s birth now, what do you think would strike him most about jazz today, besides the issue of technology?

I think he would be surprised that young people are not as engaged in it as they should and could be. Many do not even share in the joys of this culture.

Something so important as jazz, which became a tool that gave black people an identity and a political voice, is a culture that people should keep alive and not let die. It’s sad to think that people who were around playing and loving this music while the greats were around are no longer here, and there might not be many people continuing the legacy.

You’ve written that jazz is the “integrator” of races. How so?

Jazz is alive and breathing. It brings people together because many share in the love. Music is a heartbeat that creates harmony. You don’t even have to speak the same language and can still form a bond based on it.

For instance, around this time last year, I was on my first-ever music tour and it was in Russia. Although I know just a handful of words in Russian, I was still able to find harmony and purpose on the stage with the excellent Russian musicians and the beautiful people in the audience. Music integrates because it is something that everybody loves, is universal and is very healing. In the days of Jim Crow, jazz was a tool that integrated races separated by ideologies. It created harmony among the masses.

Is its potential untapped still; can it bring us closer?

I think jazz has the potential to always echo through the times and will keep the spirit of our ancestors and how far we have come; that the struggles they faced will never be forgotten. Jazz is part of American history. It is black history. It is our history.

Talk about your music education.

At first, because my major was English, I was looking into a thesis. The first idea was the bastardization of language. It dawned on me in Gloria Anzaldua’s Borderlands that this was something I was very interested in, primarily because I have roots in Haiti. Its official language is French but the common language is the bastardized version known as Haitian Creole. Those who speak French are considered intelligent and sophisticated. Those who do not and speak the latter are considered uneducated and poor.  So I started to study the evolution of language and stigma, reading books like Whistling Vivaldi: How Stereotypes Affect Us by Claude M. Steele.

I work with jazz musicians both black and white, but I noticed that the latter are always the ones telling me what jazz is and isn’t, and it made me want to study stigmas. Then I discovered the word “jass” in the book Keeping Time: Readings in Jazz History. The word refers to black musicians as the “jack asses” of the clubs. I wanted to know more about language and how jazz evolved. Such an interesting journey for me.

I love jazz and the jazz scene is just a beautiful place with amazing artists doing what they do best, with a smile on their faces and with such skill. Jazz is an art that needs to be spread more and shared; especially among young people. If we don’t teach tell them about this art, it will die with us.

I didn’t have much training except for the few lessons I took with my mentor Rachiim Asur-Sahu, an amazing bass player I met at a gig. I took one year of classes in jazz theory and listened to great artists, read a lot and used YouTube videos as a guide for vocal warmups.

I warm up and practice as much as possible. I also take breaks and try not to kill my dime-sized muscle.

The world inspires me. Love. Everything that I see. I could listen to a conversation and write the emotions that I feel are being exchanged at that moment.

How did you get into radio?

I have so much music and I’m great at doing mixes which I started with cassette tapes, and was able to easily flow one song into the next. I guess the love for it never died and as my library grew, so did my interest in music. The show keeps me engaged in music, learning and discovering what I need to know to be able to write a script, record and produce.

Talk about what you love about your band.

The JNote Band is a group of wonderful musicians whom I just adore. We work together so well and I love that we can mesh and blend so harmoniously. If it weren’t for Prrrl who is my musical director and keyboardist, I would never have performed original music. Mark Payne is like my brother and I love him. I never thought that Richie Johnsons could motivate me so much and he has become one of my biggest reasons for keeping on the journey.

Herb Lewis has my back and shows me that what I’m doing is important. I still can’t get over the fact that he always finds a way to encourage me. It’s very motivating.

You did a strong cover of “’Round Midnight.” How did you nail it?

I love Thelonious Monk. I’m a ballad singer who first started my flight by listening to and mimicking Whitney Houston. I sound best in slow ballads. This song first touched me when I heard Chaka Khan sing it. I’m always out around midnight. The guy that makes me sparkle was someone who used to be my midnight musical buddy. Plus, I tend to be at jam sessions around that time and it made sense. It has meaning for me.

How long did it take you to get comfortable scatting?

Scatting is definitely not my strong point. Put a song in front of me and I’ll sing it. I was never a natural creative singer. I could mimic and add a few of my own inflections but to be creative and do things totally differently could make me forget lyrics or even the entire melody. Then I started coming out of my shell because I was writing more songs and listening to more jazz.

I started writing a Thanksgiving song and want to have some Christmas tunes to share. I’m excited about these songs because this is the first time I ever wrote my own chord chart prior to putting the music down on production software.

I feel myself becoming more of a composer. I have a better knowledge of how music works and it’s a great feeling.

I have a few projects coming up in 2018 and some traveling plans in the works. I’m looking forward to it.