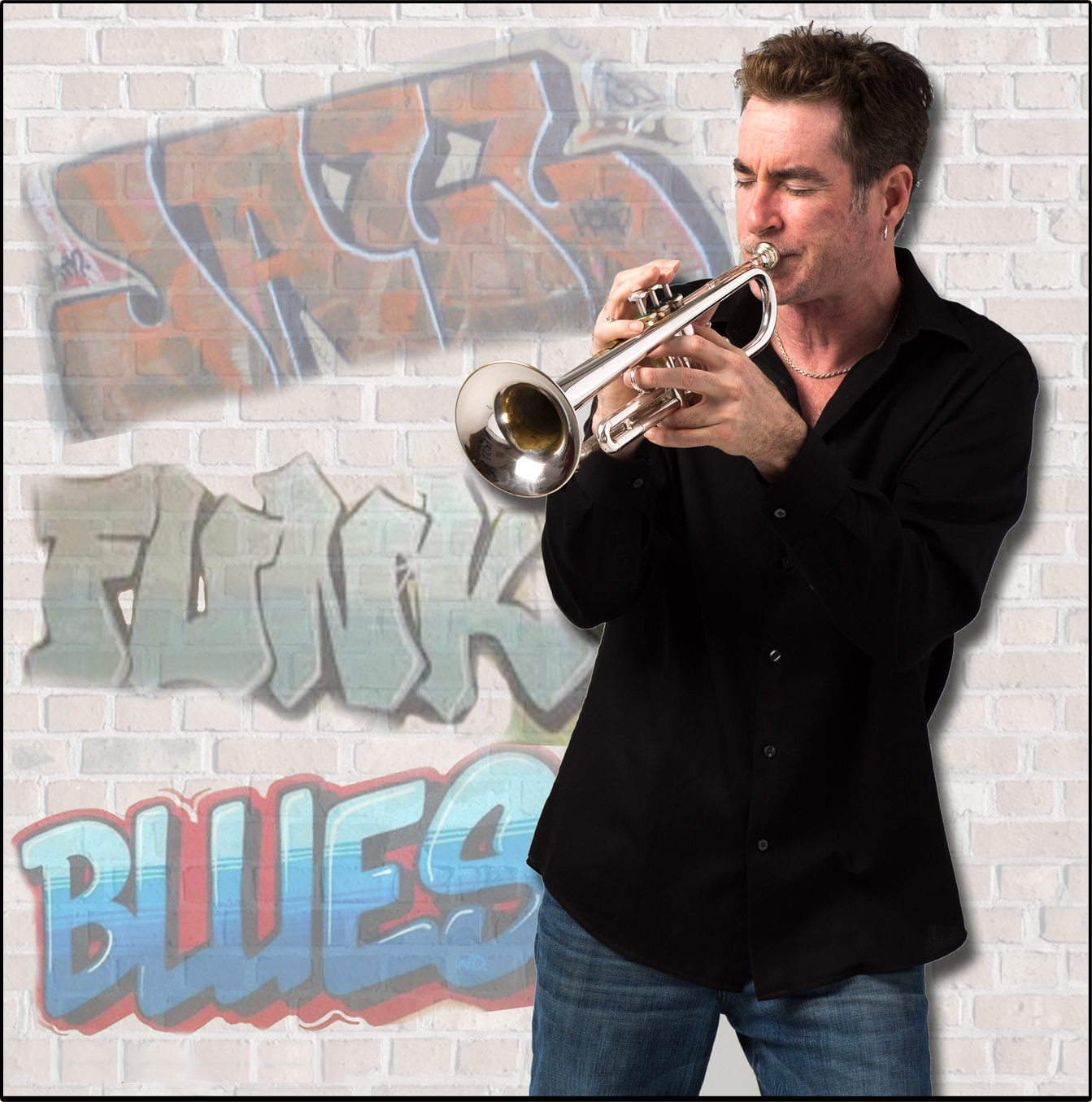 Rob Zinn, front man for the Wilmington, Delaware-based Rob Zinn Group, says their original intention was not to form a “trumpet tribute” band…however, there’s an element of that going on.

The Rob Zinn Group’s sound is wide open, clear as a bell, with tight harmonies. As the beat keeps a bouncy, forward motion, the stellar musicians wear their enjoyment on their sleeves. 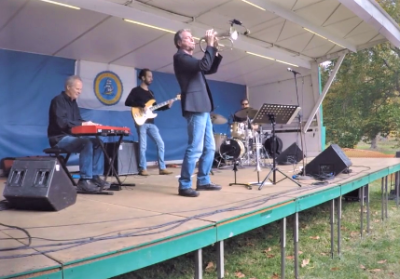 How would you describe your own individual sound?

I let others decide that. I’ve heard everything from Chuck Mangione to Rick Braun to Chet Baker. I think I sound like Rob Zinn, but I know people want to compare my sound to someone. I’m just trying to be me.

Talk about the personnel in your band and how you mesh, musically?

I was talking with my old college music buddy, Tom Palmer, and asked him about his interest in my little project. Initially I wanted him to play drums, but he is an awesome keys player so that was an easy choice.

We kicked around some names for bass and drums and since he is the University of Delaware Jazz educator he knew lots of people. I had worked with the drummer, Wes Morton, in another band and knew he was funky. The bass player, Sam Nobles, was a student at UD and Tom suggested I ask him.

We all met one day and I went over the concept and vision for what I was trying to do. They were all interested and on board with the vision, brand (me), and idea of original music. The sax player, Kevin Lyons, was added later. Kevin and I play in many bands and he is kinda my go-to guy for jazz, funk and blues as he plays it all.

I would say we’ve created some nice chemistry on stage. I love to sit back and just listen to these guys…makes me smile at how talented they are.

What is your musical background?

Many of my smooth jazz musical peers are music majors and music educators…not me. I played in junior high, high school and college jazz bands. I took a few music classes in high school but I am far from being considered well-educated in music composition.

When I was young, my parents played music all the time on the record player. I was exposed to what are now called standards on a daily basis. I was also lucky to be able to attend some music camps in the area. There was a rich awareness of jazz in Wilmington DE, and I was lucky to be here during that time. When I first started playing professionally, I played in big bands. What great training that was!!

Was music encouraged as a career in your family?

My parents were very traditional. They were always there to support my musical endeavors, especially later in my life. But I would say they tried to dissuade me from being a professional musician. They always thought it would be tough on family life, playing every weekend. They were right, at least, in the traditional sense. I play music because I want to, not because I have to.

What is the jazz scene like in Wilmington, Delaware?

Surprisingly, Wilmington has a rich music scene for many genres of music. Jazzy, funky, bluesy groove type music fits right in. There is a very cool club called Nomad in Wilmington and they have jazz-type groups on Friday nights.

My group plays other places, like Ubon Thai Cuisine, and the owner Buddy is a huge supporter of jazz. Delaware is also the home to some very large jazz festivals: the Clifford Brown Jazz Festival and the Rehoboth Jazz Festival.

Do the other band members come from Delaware?

Tom is originally from New Jersey, Wes is from Connecticut, Kevin is from Washington and I was born in Maryland. Sam is the only one born and raised in Delaware. Everyone except Wes lives in Delaware now.

If you had to pick a favorite sub-genre: straight-ahead, smooth, Latin…?

I love to play straight-ahead jazz, bebop and swing music. I really love the challenge, but from a business perspective I loosely label my music as smooth jazz, though I truly believe it is much more than that. Just listen to the songs I’ve put out.

What is your favorite original song and why?

So far, I have to say “Back Where We Started.” The chords are challenging and it took me about four months to write the melody. I refused to give up on it and am very happy with the end results; the sound of the horn, the musical choices, Tom’s sweet piano solo, the production and Sam’s tasty bass line at the end of the song. I just think the song is pretty and it touches me.

What was the production process of the CD “Yesterday Again”?

There is a local guy named Ritchie Rubini and he has so much experience as a professional musician and producer. I had never done anything like this. I was usually a hired trumpet player on studio sessions and I’d cut several live albums.

We tracked most of the album live in studio, but we did some over-dubs to clean a few things up. The guitar work was done live, after the other parts were completed.

I probably drove Ritchie crazy trying to get it to sound “just right.” I am very proud of the first album and its success. I have Ritchie, the studio owner Ray Gagliardino and all the musicians to thank for that.

I am in the midst of recording album number 2. I have decided to completely go for it on this one. I interviewed many of the top smooth jazz producers and chose one with a resume as long as your arm and some Grammy hardware to his credit.

He lives in California so that’s where I go to record…in his studio. We also do live sessions with a full band in another studio in Sun City. So far, it’s sounding great. He has over 70 #1 songs that he has played on or produced. I’m hoping he has at least one more for me.

Favorite venue to play and why?

There is a place called The Bethesda Blues and Jazz Supper Club in Bethesda, MD. This one is special because of the circumstance. It was my first all-star jazz jam, which is basically a collection of the top artists playing the closing show at the end of the Lake Arbor Jazz Festival. It was very exciting to share the stage with so many amazing artists.

There is also an awesome venue close to home called The Queen. It’s an old theatre with a lot of history dating back to 1916. I regularly play there but not yet with my band. I am working on a show for 2018.

Where would you most like to play that you have not?

Two places come to mind; one is the Queen and one is the Rehoboth Jazz Festival. Being a trumpet player from Delaware, I would love to play that festival. Maybe in 2018? I’m looking at 2018 to expand from local venues to national venues.

Why do you think there is no push to expose the public to more jazz- in movies, TV, in public spaces or on commercials?

There is so much music out there and with today’s technology anyone can create a song and put it on Facebook, Soundcloud or YouTube. While that is very cool, all these musical choices make it very competitive.

Musical tastes evolve. While the jazz community is passionate about their music, it has dwindled over time. I guess it comes down to popularity, what the public likes and the perception of decision-makers in movies, commercials and television as to what the public likes.

I try to be present, meaning to play in the moment and connect with my audience. Sometimes I have a tendency to over-think and that’s not good. To me, it’s not about a perfect performance or the number of notes you play, it’s all about connecting with the audience and entertaining. I always say I want people to tell me “I really enjoyed your band,” not “You’re a great trumpet player.”

What’s your favorite horn and why?

I was recently endorsed by Phaeton Trumpets so of course those are my favorite horns to play. The horns are so unique in the way they look and they sound great. I was looking for a certain sound and these really deliver the perfect tone quality for my music. You’ll hear them all on my next album.

How many do you own?

I have a couple of student model horns that I don’t play. Probably make one into a light someday. I have my Schilke B3 trumpet that I bought new in 1979, my 1938 Martin Handcraft Imperial trumpet which I will probably sell since I don’t play it. I have a 1975 Getzen Eterna flugelhorn. I have a Cannonball 725 Stone Series trumpet and a very cool and sentimental 1920 Holton trumpet that was my grandfather’s.

I play Phaeton horns in my group exclusively; the Schilke when I do big-band type gigs and the Cannonball when I play in funk and top 40 bands.

Where will your band perform for the rest of 2017?

We have a few local club dates this year, but I’m focusing on the album at the moment. So much to do with that and it’s consuming in a good way. Heading back out to Cali in November to finish recording the rest of the tracks, then it’s mastering, art work, production, promotion and so on.

I’m hoping the album will open more doors and allow me to realize my goal of being a national performing artist. It’s time to expand beyond the local region and play shows across the country and overseas.

I feel very blessed. I can’t tell you how exciting it is to have my music playing on the airwaves and in several countries. I’ve gotten to know so many passionate and talented people along the way – both musical artists and other industry people who I now call friends. I realize how difficult this is. Thank you everyone for your love and support and to all my music fans who believe in me and my music! Setting intentions for great things.