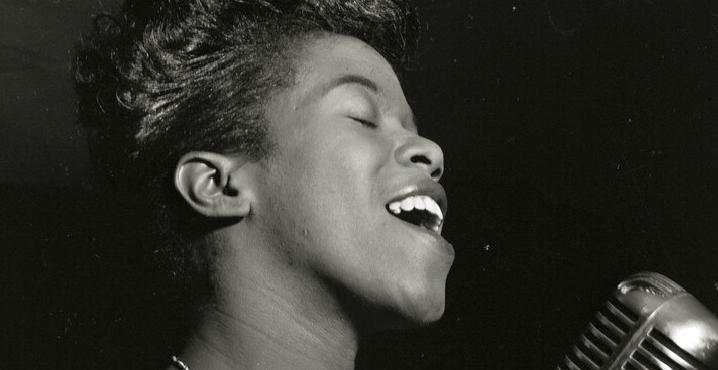 at the NJ Performing Arts Center

For the sixth year in a row, jazz lovers and those who have found their musical inspiration from Sarah Vaughan have a place to go where it’s all Sassy, all the time. A vocal competition that provides breath-holding excitement and tingly thrills in honor of Ms. Vaughan will be held at the NJ Performing Arts Center on November 12, 2017.

But the deadline for entry is coming fast. Interested crooners must act by the September 5th deadline. The link is here.

Craig Pearce, Programming Manager at NJPAC, explains the competition and what makes it such a magical evening.

When and why did you start this contest?

It began in 2012 concurrent with the first TD James Moody Festival. Jazz producer Larry Rosen approached NJPAC to collaborate on a unique project. And after further discussions, The Sarah Vaughan International Jazz Vocal Competition was created. The competition gives a platform to talented, aspiring jazz singers ready to springboard into professional careers.

What is it about this jazz icon that prompted the contest, over, say, other female jazz artists?

Sarah Vaughan was a natural fit.

An incomparable singer, she was born in Newark in 1924 and was known as “Sassy” throughout her life for her vibrant personality. After winning the top prize of $10 at the Apollo Theater’s amateur night at age 18, she went on to record with the greatest names in jazz, including Count Basie, Duke Ellington, Billy Eckstine and countless others.  This competition is a 21st century version of the Apollo’s amateur night, which helped launch the career of a gifted teenager from Newark more than 70 years ago.

Vaughan was also a graduate of Newark Arts High School. The street in front of NJPAC is nicknamed “Sarah Vaughan Way.”

On average, how many entrants do you get each year?

What is the process for you to get to the finalists?

The specific procedure for qualifying is on our website, but as a summary, the top 40 entrants are whittled to 15, then to five. Finalists are notified by email between September 29 and October 6, 2017.

How many finalists compete on the night of the event?

What qualities are you looking for in a winner?

The judges are looking for vocal quality, musicality, technique, performance, individuality, artistic interpretation and the ability to swing.

Is there a monetary award or the chance to sign a contract with a record label?

The Grand Prize is called the Sassy Award.

One (1) Grand prize, $5,000 USD, and an offer from Concord Music Group to a recording contract;

How many people attend the event each year?

Approximately 400 people attend the live competition each year in the Victoria Theater at NJPAC.

What kind of feedback have you received from the public and the music industry?

Much of the audience loves to return every year to the live competition. I hear them at intermission talking about their favorites and who they think should win. Our first winner, Cyrille Aimee, has released her fourth album and continues to tour here and abroad, including appearances with the Jazz at Lincoln Center Orchestra. Jazzmeia Horn, the 2013 winner, went on to win the 2015 Thelonious Monk Competition and is now appearing at many jazz centers.

Our 2014 winner, Ashleigh Smith, released her first album on Concord Records, one of her prizes for winning the Sassy Award.

How has this event evolved since its inception?

It’s the only international jazz vocal competition of its kind. This year, for the 6th annual, the competition is open for the first time to men and women. (Previously only women were eligible to compete.) Bassist Christian McBride, our Jazz Advisor and a former judge for the competition, predicts this will be a game-changer and generate even more excitement in the finals.

Over the past five years, do you think the public’s interest in jazz has shrunk, grown, or stayed the same?

I’m sure this is a matter of personal opinion. But at NJPAC, jazz programs continue to evolve. It was six years ago that we created the TD James Moody Jazz Festival. And in November, we have an intensified schedule of jazz-related programming. We’ve also scheduled programs throughout the year.

This past April, NJPAC hosted “Wayne Shorter Weekend,” which included a performance with the Wayne Shorter Quartet and Herbie Hancock as special guest. Five successful performances in just one weekend.

What is special about NJPAC as a venue that makes this event really come to life?

NJPAC is one of the largest performing arts centers in the country, and has an international reputation for its artistry. For jazz musicians who are used to performing in all kinds of venues and small clubs, they’re bowled over when they walk on stage in our beautiful Prudential Hall, yet also enjoy the closeness to the audience offered by the Victoria Theater which has 500 seats.

We have one of the most accomplished and best-connected musicians around: Christian McBride, who informs our jazz programming and has served as a judge for the competition (he has a conflict with the date this year). We assemble the best professionals in the business as judges at the live competition, like artist managers, DJs, historians and performers.

The live competition is something special. Our Musical Director, Sergio Salvatore, is invested in this program and rehearses with the finalists and his A-list accompanists to make sure this is a knockout performance. Finalists are showcased in a state-of-the-art production, and the audience sees and learns about who could very well be among the next generation of great jazz vocalists.

The competition has been hosted by Rhonda Hamilton of WBGO Jazz 88.3FM, and WBGO supports the competition each year by interviewing the finalists live on the station on the days leading up to the event.

NJPAC is invested in the future of jazz especially in Newark, which has a rich legacy of the music, and all of New Jersey. Our arts education programs in jazz alone encourage young musicians to someday perform in concerts by Wells Fargo Jazz For Teens and the Arts Center’s hallmark ensemble for high schoolers, the James Moody Jazz Orchestra.