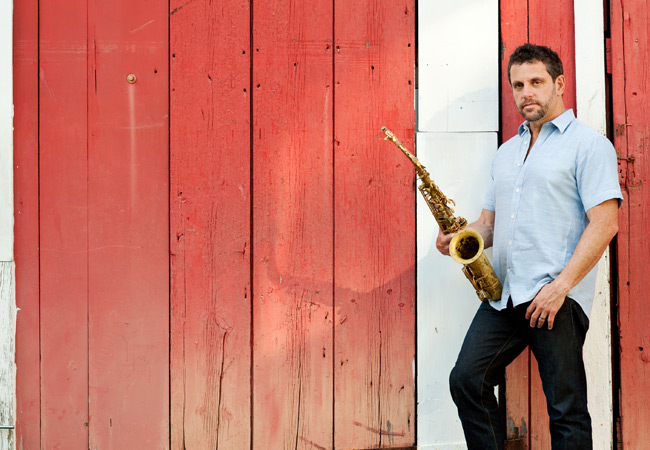 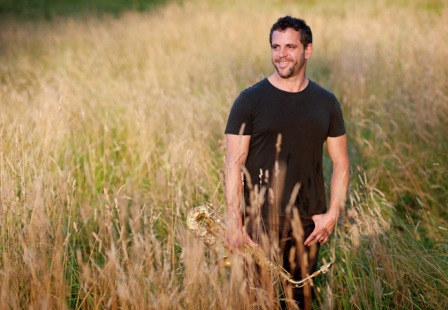 The guy has a wide and easy vibrato, hanging back on the beat just a smidge so you can feel the sultriness of it. This is “Traveler,” Andy Snitzer’s musical commentary about being on the road, all over the planet, and then about being home, family, and reflection.

You’d have to be in your 80s with such a vast background as a performer and studio musician; through jazz, pop, rock…how have you accomplished so much already?

I’m not quite in my 80s yet! I went to NYC very young (21) and played everywhere I could and accepted every bit of work I was offered, no matter how humble. I had good training in music, and some good luck in being quick to pick things up, quick with memory, and that helped me get an early reputation as someone good to hire. It just went from there, with hard work, bits of good luck and opportunity, reliability and professionalism.

Which of the saxes is your favorite and why?

I mostly practice on tenor, since it kind of goes the most places, but I do absolutely love the soaring quality of the alto. Those two are definitely my faves.

I studied clarinet from 8 years old, switched to sax at 15, relatively late. From 15 to 21 all I did was practice. I went to Northwestern for a year, and then U Miami for three years. Both were great, teachers and fellow students, and a literal treasure trove of info.

When did you decide you wanted to be a professional musician?

When I switched to sax, at 15. All I wanted to do was practice. I saw the kind of life and careers that Mike Brecker and Dave Sanborn had, and I wanted to do what they were doing.

Do you come from a musical family?

Both of my parents played a bit of piano, and my mother was definitely an artistic person in every sense.  She exposed us to music, art and theatre. My family, in retrospect, were saints about the practicing. It couldn’t have been fun for my parents or three siblings, or the neighbors.

Is there a misconception about jazz?

To a large extent it’s a learned language, more so than pop music; not that that makes it any more powerful or important. It just means people can’t immediately digest it, they have to try it for a while to start to understand the language.

Is there a blending in people’s minds of smooth jazz/R&B/soul and even into fusion?

I think you just have to migrate to what you like, and not worry about a label, or how another person hears it, whether they like or dislike it.

The music world was very saddened by the loss of Chuck Loeb. What kind of legacy do you feel he leaves?

Chuck was a master musician, a phenomenally gifted guitar player, a personable and well-liked man across many different scenes in many different countries. His musical and personal legacy are embodied in those who knew him and heard him play.

Have you achieved the sound you want or is it always evolving?

Do you get the jitters before a performance or do you just dig right in?

I get the jitters if I know people in the audience personally. That’s it. Other than that, I just go out and hit it.

Which artists have been the most fun to play with?

I love all the big-time rock and pop acts I’ve worked for (The Rolling Stones, Paul Simon, Billy Joel, Sting) all for different reasons.  I played a lot of straight-ahead jazz with drummer Victor Lewis; it’s impossible to sound bad soloing when Victor is playing behind you.

Not that I’ve played there as a solo artist, but, Red Rocks in Denver. I played there with Paul Simon as a member of his band.

Place you had always wanted to perform?

Carnegie Hall, and I have done that several times now.

Is there a balance in your life or is it all music, all the time?

Music is a big portion, along with family. But I also love food and wine, tennis, architecture and the fine arts.

I’m in New York City, and it’s about as a good a jazz scene as you can find on the planet. There are so many great players here, because this is still where the world comes to compete. There are now great players from all over the planet, not just the U.S., and it’s really cool to witness that development.

I’m just starting to think about the next one. It’s a ton of work, and you have to be ready for the creative and logistical challenge.  Soon…

What’s your strategy to grow your career?

The only thing that’s ever worked for me is practicing, staying on game and keeping my head up in the community. Being as good as you can be, and being visible. That powers the random swirl that leads to opportunities.