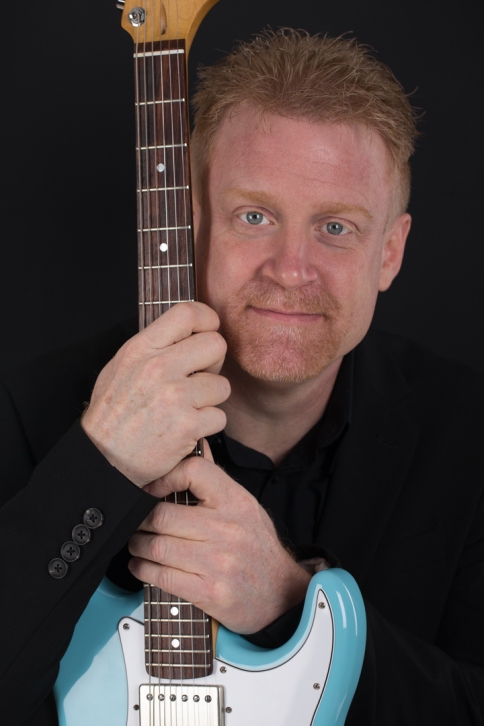 Guitarist, songwriter and TV composer B Christopher just released a CD inspired by the planet Mars called Four from the Sun. With a thesaurus-like wit, B (given name Brendan) has named each track for a different shade of red. From the easy flowing “Auburn” to the soaring sax on “Magenta” and the moody “Garnet,” each has its own delicious groove.

When did you learn guitar?

I started when I was almost 17.

Do you play other instruments?

I can play a very little bit of keys if you give me enough time. I played keys on most of my new record, but I require quite a bit of time to get it right.

Why did you stop performing live?

I stopped over six years ago now. The recording just became my priority as television music opportunities grew. It made sense to focus on that.

How do you like the change from live to studio?

I love the change. I played enough bar gigs to last two lifetimes.

What particular skills are required in recording and production?

I think once a certain level of skill has been attained everyone is pretty good. The skill set of a great musician is having a vicious work ethic and patience. There are a ton of great players, but when you get down to the ones who are willing to “work” the number shrinks dramatically. Working and playing aren’t the same thing.

What is the biggest challenge you face in production?

Staying organized…with the amount of music I record, it requires quite a bit of organization.

What kind of equipment do you have?

How much of your work is done in Stroudsburg, Pennsylvania versus Toms River, NJ?

All of the recording of guitars is done in Stroudsburg. The Broken Door is my studio within the store. The studio desk is a broken door on two broken speaker cabinets. You would never know looking at it. But I found the door in the basement of the building and put it to good use. Hence, “The Broken Door.”

I do a lot of post-production (mixing, mastering, etc.) in Toms River at Canyon Music, as well as adding in the drums, some keys and bass.

You cross many genres. How does a musician stay versatile?

I do cross a lot of genres. Doing the TV music, that’s a requirement if you want to continue to work.  It’s a blessing really. I have freedom to record just about anything I’d like to.

Which artists inspire you the most and why?

Eric Clapton and Mark Knopfler. It’s the maturity in their playing. Not a lot of notes, just the right ones. They have a way of stripping away the unnecessary while leaving the feeling that nothing is missing.

The players who move me the most function in that space of understated virtuosity. The pot is always just simmering, right on the brink of boiling, but never so much heat that it boils over. I really like the tension that “simmering” creates.

What was the most interesting project you’ve done over the years?

Outside of my records, there was a show that never made it to air. I wrote the music for the “sizzle” which is like a demo of the show, perhaps a 10- or 15-minute overview. It’s some of the best music I’ve written. Unfortunately, it never aired. But that’s life, isn’t it?

How would you characterize your sound?

As far as the writing or inspiration of the songs, it’s never the same. Two of the songs on Four from the Sun started as TV tracks. They had such a cool vibe that I thought when it was time to do a record I would revisit them with fresh ears. Sometimes when I go back and listen to something I thought was pretty strong, a few months later it doesn’t hold up. But that wasn’t case with “Rouge” and “Maroon.”

What is the biggest challenge the independent recording studio faces today?

Home recording studios. Garage Band is software you can get on an iPhone for $5 and it’s as good as any of the cheaper studios I’ve been to if you’re patient and reasonably creative.

Just work. I’m recording very regularly. I stockpile music and wait for the right opportunity for that music to be used. Those opportunities come and they want the music quickly. I try to have it at my fingertips.

What project was the most memorable and why?

Four from the Sun, because of the talented musicians who are on it. I’ve learned so much about having an open mind and open ears with these musicians. There’s a reason they’re as successful as they are. I’ve been incredibly lucky to have them contribute to the record.

The record was released on 7/24/17.  All the songs titles are different shades of red… Auburn, Scarlet, Crimson, etc. And Mars is indeed red and Four from The Sun. It has great musicians:

The personnel are what makes it so much fun for me.

Nathan East is one of the most recorded bassists ever. He’s on Michael Jackson records, Clapton, etc. I think it would be easier to say who he hasn’t played with. That would be a shorter list. He’s been in Clapton’s Band since the late 80’s.

Anton Fig currently plays drums with Joe Bonamassa. He was in The David Letterman Band for almost 30 years.

Shawn Pelton has recorded drums with everyone from Springsteen to Ray Charles. He’s been in The Saturday Night Live Band for around 20 years.

Andy Snitzer recorded and/or toured with Paul Simon, The Rolling Stones, Billy Joel and dozens of others. He’s an amazing sax player!

Eric Collier and I toured together for several years. He also is very involved with my TV music. He’s played bass on most of what I’ve recorded for TV.

Ron Grana is a friend of a friend who knocked the ball out of the park on piano.

Talk about the songs on Four from the Sun.

The first track, “Scarlet,” was interesting in how it developed. By the time I have other musicians come in and play, my guitar parts are 95% done, so I did all the guitars and keys in Stroudsburg and then went to NYC to record the drums with Shawn Pelton for this track.

His playing was so in the pocket that it really changed how I thought about the track as a whole. I then went to LA to get the bass with Nathan East. We discussed the direction of the track and I said I’m hearing it like Michael Jackson’s “Billie Jean.” So, he did a take with that in mind. It was his second take that ended up on the record. Before Shawn played I didn’t hear it like Billie Jean at all in my head.

The songs evolve in an unexpected way sometimes, as each layer is added.

I’m very conscious of leaving space for everyone to play and shine. It’s a real balancing act. In my case it’s never about adding more guitar; it’s about taking as much away as I can while still producing a guitar record.

I used to have goals. Now I just keep my head down and keep working. I’m looking forward to seeing where the road leads!

Thanks for taking the time to write about my little contribution to the music world.

Photos courtesy of and with permission of the artist