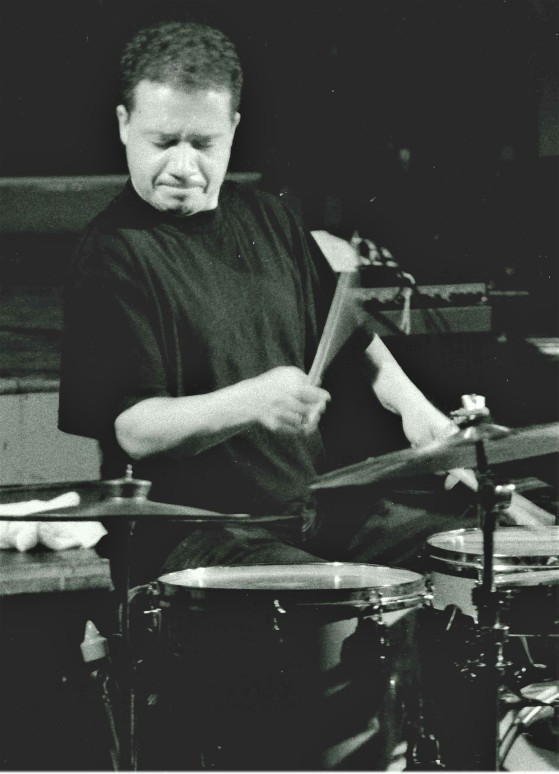 When you’re a percussionist, everything looks like it belongs in your drum kit. Free-improviser Mark Sanders uses all manner of objects and musical accessories to create different sounds.

The UK-based drummer has a long list of jazz colleagues to play mix and match. No matter who he plays with (the personnel combinations in his career have been nothing short of astounding), he is laser-focused and voracious when sticks hit the drum.

Is it pressure to be the master timekeeper for the band?

As a mainly free-improvising drummer it has always been something I need to work on. Twelve years with Jah Wobble [English bass guitarist] taught me a lot. The biggest pressure is playing with backing tracks or drum machines live without headphones, to make sure you can hear them properly.

How do you decide which item in your kit to play; is this written or improv?

Unless it’s a piece of music where the composer has stipulated his/her ideas for the piece, I am always improvising.

What are some of the more unusual instruments you play within the realm of percussion?

I try to get as many sounds as I can from regular European/Asian/African instruments or any ready-made percussion instruments (for instance I use part of the inside of a roto tom as a bell) by bowing, rubbing or scraping them with different bows, sticks or mallets.

Why do the brushes sound so sensual and rich in jazz?

I think that’s down to the master brush players like Papa Jo Jones or Jimmy Cobb showing their wonderful technique of keeping time with slow relaxed sweeps across the snare drum. They give a swaying feel and what you call a sensual feel.

Which of the drums can be tuned to a particular key?

Every drummer has his/her own personal way of tuning the drums; some tune to a key, some don’t. For me it depends on the type of music, the type of bass player (double bass or electric), the room or the drum kit.

I very often play with hired kits that are sometimes unsuitable for the musical situation, but with time spent tuning I can usually find a solution.

Are cymbals in a key?

Not from my experience.

I never saw the cymbals played with a string bow…or a tambourine lain on top of one. How did you come up with that?

When I first started being interested in playing jazz and improvised music, I was helped and influenced by the great percussionist Will Evans. At the time, he was playing with both Evan Parker and Derek Bailey. Will placed a flat drum face down on the cymbals and altered the sound by moving the drum across the cymbal.

Years later I came up with the idea of bowing the cymbal instead. This creates much longer notes which can also be altered by moving the drum.

What is the weirdest object you have used as a percussion instrument?

What is the biggest ongoing expense as a percussionist- drumsticks, keys, pads, pedals…?

I suppose it would be sticks, brushes and mallets. It used to be cymbals but I had to give up that addiction!

I just spent far too much on a bass drum pedal. I love going to the US or Brazil and finding a good percussion or second-hand drum shop. The range of equipment on offer is wider and the prices lower.

When did you begin learning drums?

I had a few drum lessons in tuned percussion at age 15 but started drum kit lessons seriously with Nobby Clarke from Warrington at 17. Then had lessons with Nigel Morris and Bob Armstrong.

Have you had the support of your family or did they feel it was too noisy?

My dad played drums a bit when he was younger but hated it if I even played practice pads.

I left home at 18 and then I could practice properly. My parents were generally supportive, especially in the early years, buying me beat-up old cars to drive my drum kit about.

What song first made you realize this was what you wanted to do?

According to my mum it was when I was about 5 years old. We went to see Cliff Richard & The Shadows live, and I went crazy in the drum solo by the excellent Brian Bennett.

At about age 14 I was listening to Syd Barrett’s Pink Floyd and their extended improvisations sent me towards music – more than just something to listen to, I wanted to be involved.

Have you always gravitated to the rhythm of a song?

Yes, I think it’s only natural, foot-tapping being the obvious example.

My earliest memories of recognizing rhythm were with car indicators ticking, and especially the rhythm of the trains running slowly from London’s Waterloo to Charing Cross Stations.

I found it intoxicating. It’s a pity the new trains are so smooth running!

Who are your favorite percussionists?

I love nearly all drummers and all percussionists. It’s always a joy to watch musicians doing their thing.

Nigel Morris was also a huge influence on me, an amazing musician and teacher. Tony Oxley and Louis Moholo [South African drummer] were also huge influences.

Roger Turner, Tony Levin and Tony Marsh are world-class drummers who lived or live in England and were a great influence.

Who has influenced you most in your career?

Apart from the above, my biggest influence was Paul Rogers. He lived in the house I moved to when I left home. He was very influential in my changing gradually from the rock scene to learning to play jazz. He also introduced me to Pete Nu who helped me enormously by giving me gigs early on.

I also went to Lambeth Council for evening jazz classes, and played with a great trumpeter, Brian Tueson.

What is your favorite subgenre of jazz, if you have one?

I definitely don’t have one preferable sub-genre in particular; I have phases that come and go. I could be listening to, definitely, Ahmad Jamal, Coltrane, Ellington, Cecil Taylor, Albert Ayler or European Improvised music.

What lead up to getting repped by Two Rivers?

Bass player Olie Brice was first approached by [vocalist] Alya Al-Sultani from Two Rivers Records about working with him on a CD release and concert, with the group of his choice. He chose the great saxophonist from The ICP Orchestra, Toby Delius; and myself.

This was a great success. We’ve done some cool gigs and sold out all the CDs. Then Alya asked me to play drums in her new group Collective X which is fantastic!

How did James Baldwin’s poem inspire your band’s name?

I love James Baldwin not only for his poetry, prose and books, but his fearless attitude to life. This poem is the truth. It’s timeless. He says so much about the past, present and future. I think “Stagger Lee Wonders” is a perfect name for this group of musicians who stand proudly with the sentiments of the poem and live the experiences within it.

The Downtown Music Gallery in NYC reviewed you as sometimes playing with restraint and at other times “erupting like a volcano.” Can you elaborate?

I suppose in most of the Free Jazz records I have released, it is likely I will play with high velocity and energy, and some delicacy as well. I love the music to have variety.

According to Facebook, it looks like there are 6 people total in Stagger Lee Wonders. Talk about the personnel.

It’s a pool of musicians I chose from who can make the gig. These are world-class musicians with busy schedules.

They are Robert Mitchel on piano; Neil Charles on bass; Rowland Sutherland on flute, Corey Mwamba on vibraphone; and Cleveland Watkiss, Elaine Mitchener and my sister Debbie Sanders on vocals.

It’s a joy at last to be able to work with Debbie! It’s been a great year working on each other’s projects. She is a soul singer, songwriter and story teller so is a perfect foil for Elaine’s New Music Classical and free-improvised music experience, and Cleveland’s jazz and free-improvised experience. They sound incredible together.

Under the Two Rivers label you have another band?

I suppose you could call it my band. I instigated it by calling Alya Al-Sultani and asked if she would be interested in putting out a CD with saxophonist Rachel Musson, and the long-standing rhythm section of John Edwards and me.

I love playing with Rachel. She’s far too underrated. She’s an excellent saxophone player and a joy, as drummer, to play with. We don’t have a name for this band, other than using our surnames.

I first played with Wadada about 10 years ago at Banlieus Bleues Festival in Paris with Spring Hill Jack. These two are musicians/producers/DJs who use a pool of musicians to create music around their backing tracks.

We then did some concerts in London and a recording at Abbey Road Studios which was released on Treader Records.

Wadada then invited John Edwards and myself to play as a trio at the jazz festival in Riga [Latvia], which was amazing, as normally Wadada doesn’t say anything about the music before we play. But his playing is so purposeful and clear it leads you – but demands you – to be very strong in your own contributions. He’s a great and respectful person to work with.

Any CDs out or in the works?

I’ve released about 150 CDs now. Some releases in recent months have been with electro- acoustic composer/improviser John Wall; Paul Dunmall’s Quartet featuring pianists Matthew Shipp and Liam Noble; and a trio with John Butcher, all with John Edwards and myself as rhythm section.

Alya Al-Sultana’s Collective X has a recording ready to come out.

Two Rivers and the amazing flautist Nicole Mitchel I have a digital download recording of a gig we did at Cafe Oto [London] on Otoroku.

A recording with Charles Gayle, hopefully to be released, is being discussed at the moment.

Any sights on a Grammy?

Where have you toured this year?

What venue would you most want to perform?

I would love to play The Royal Albert Hall. I love the architecture, sound and atmosphere. I had a gig booked at Sydney Opera House but the promoter changed the venue at the last minute. That would have been a treat.

I want to record our band Stagger Lee Wonders soon and would love to tour it.

Also, to keep playing with my great friends and colleagues. I’m always looking to play more with Roscoe Mitchel and the amazing players of his generation.

What do you most want people to know about your band?

That it’s living breathing Creativity in touch with history and the present, with words and music from the heart.

Photo by Dennis Austin; courtesy of and with permission of interviewee.