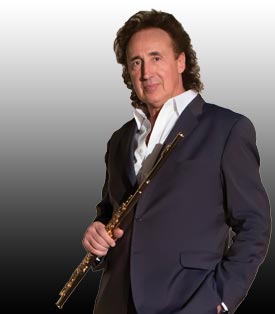 Smitten by the British Invasion as a youth in Windsor, Ontario, Alexander Zonjic picked up a guitar and formed a rock band with his school friends. But his destiny was in another instrument entirely. When the flute came into his life, he was astoundingly lucky to receive private lessons from the second flutist and then the principal flutist of the Detroit Symphony Orchestra.

His career has unfurled by blending genres and telling stories through his flute.

Zonjic’s catalog includes CD’s titled “Romance with You,” “Reach for the Sky,” and “When Is It Real.”

When and why did you first pick up the flute?

I actually started my musical life on the guitar when I was eight years old. The flute didn’t come along until I was 21 years old.

I purchased a flute off a guy who wanted $50 but I only had nine dollars, and he took it. It was on a street corner in Windsor Ontario, I was back in Windsor to visit my family and this street salesman recognized me as a local guitarist.

What other instruments do you play?

I still play the guitar on my shows and enjoy it very much. The demand of playing the flute, however, does not allow me much time to practice guitar anymore. One instrument is really all the challenge that one lifetime can bear.

Jazz on the River is a very special festival and experience. While it’s rewarding to play in front of any size audience, there is something special about being outdoors and in front of at least 20,000 people.

How would you compare the smooth jazz scene here in the US with Canada?

I don’t normally categorize music as smooth or not smooth. The audiences in Canada and all over the world for that matter are all wonderful. People really are people everywhere, and they all enjoy music performed on a high level.

You’ve definitely performed all over the US- what cities are most memorable for being supportive of artists?

I have always found support from all over the country. While we enjoy all cities, there is something very special about Detroit, New York and L.A.

Which artists/composers have influenced you?

Too many to mention. In the classical world, the music of Bach and Mozart sticks out, and in the jazz world Bob James, Hubert Laws and Herbie Hancock are favorites, to name a few.

How would you characterize your sound?

My sound is a combination of many influences: the early rock ‘n’ roll experiences along with studying classical music and performing with great musicians like Bob James and Jeff Lorber. They’ve all contributed to what people hear from me today. To be clear, I always thought of my sound and music as being jazzy but not necessarily jazz in the traditional sense.

You have an impressive career in big orchestras. What is your connection to the classical music genre?

I have no preference to any particular style of music; but classical music seems to be one of my bigger challenges. As a result, I’m always looking for opportunities to perform in that world.

What are some of the differences between playing with a huge orchestra vs. a small ensemble, especially for the flute?

Playing on a high-level in any style of music with any size ensemble is always challenging. You need to practice and prepare for all of them with the same commitment.

What is your own favorite CD or track, and why?

I have no favorite CD’s or favorite tracks from any of my recordings. They all represent different periods in my career and I find special moments in many of them.

Talk about the jazz cruise. How many have you done and what’s special about the experience?

What do you like most about the Detroit jazz scene?

It’s not the Detroit jazz scene that I’m drawn to but Detroit itself. Great people and incredible musical heritage all combine to make it, in my mind, the greatest music city in the world.

Where do you live now?

Although I spend most of my time in Detroit and in the US, my primary residence is still in Windsor, Ontario. I’ve never found the daily commute to be a disadvantage.

How would you say that fusion has changed since Jeff Lorber started performing, and why do you like it?

All music evolves. The idea of fusing different elements of music has been around forever. I’m a big Jeff Lorber fan and his ability to combine R&B, jazz and funk together has always influenced and impressed me.

What projects are you working on right now?

I’m always working on new projects. There is a new CD in progress along with our continuing involvement with festivals and live music. In recent months, we’ve started a new weekly television show and a weekly radio show. All things continue to be creative, fun and rewarding.

I guess you could say we’re pretty lucky.

Photo courtesy of the artist with permission